Do you ever watch a movie and think, “Man, those actresses could be sisters.” or  “It’s hard to tell those two men apart because they look so similar.”   These actors could maybe even switch places just like Billy and Bobby Mauch did in “The Prince and the Pauper” (1937).

Younger movie viewers of today may say that all old actors all look the same. This isn’t true of course, but there are some that certainly look very similar. This is a result of being groomed by movie studios to have glamour and charm.

Actors and actresses also are given names that sound similar and can cause confusion.

Here is a list of actors who look similar and have confusingly similar names.

Joan Leslie, Joyce Reynolds, Teresa Wright
-Joyce Reynolds emerged in the 1940s in the movie “Janie” with a clean Joan Leslie appearance and a squeaky Teresa Wright voice.  Warner Brothers must have thought that Joan and Joyce looked similar as well, since Joan Leslie played Janie in the sequel to “Janie”: “Janie Gets Married.”

Vera-Ellen, Vera Miles, Mitzi Gaynor
– I think the thing that is funniest is that two of the women have the same first name.  I can tell the difference between them, but you have to admit they all look very similar. All three women are very thin, blonde and rather tan. Vera Miles had one of her first acting roles on the TV show “Alfred Hitchcock Presents” and looked very similar to Vera-Ellen because she was thinner than I had ever seen her.   However, all three women had different careers.
Vera Miles stared mostly in dramatic roles, and occasionally in bit parts on TV (like a romantic interest for Fred MacMurray on “My Three Sons“) .  After Grace Kelly, she was Alfred Hitchcock’s favorite actress, according to IMDB. Unfortunately, she had to turn down roles because she was pregnant. Miles is still living.
Vera-Ellen was a ballet dancer and was in several musicals. In earlier movies like “On the Town,” Vera was thin, but looked healthy. In later movies, like “White Christmas,” she was almost dangerously thin, because she was anorexic. She had the smallest waist in Hollywood in the 1940s and 1950s and suffered from early aging because of anorexia ,according to IMDB, so you will notice that she wears turtle necks to cover it.  After she retired she had severe arthritis and was practically a recluse, dying in 1981.
Mitzi Gaynor is best known for her role in movie musicals like “South Pacific.” Though she didn’t have a tremendous career, she was very successful with her comedic, musical variety TV specials in the 1960s and 1970s. Currently, Mitzi is performing a one woman show. 0

Anne Shirley and Olivia de Havilland
-Anne Shirley  never had the same star power or acting skills as Olivia de Havilland, but you can’t deny their similar appearance. Particularly the way Anne Shirley looks in “The Devil & Daniel Webster.” The two starred together in the irritating comedy “Government Girl” (a movie that de Havilland hated and had to make because of contractual agreements. She purposefully acted ridiculous in the movie). 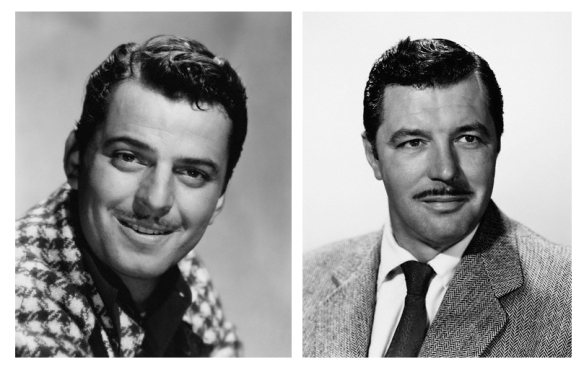 John Carroll and James Craig
– Both men played small romantic roles in the 1940s when most of the lead actors like Clark Gable and Robert Taylor were fighting in World War II. Carroll starred with Esther Williams in “Fiesta ” (1947) and “Flying Tigers” (1942) with John Wayne. Craig was in several “feel good” movies in the 1940s like “Our Vines Have Tender Grapes” (1945) with Margaret O’Brien and “The Human Comedy” (1943) with Fay Bainter.

Joan Blondell and Ann Sothern
-In the 1930s, Joan Blondell had a curvy, sassy look of her own; pretty but also comedic. In the 1940s, Blondell was a bit more curvy and switched from the tight 1930s hair styles to long and wavy. Her 1940s look was similar to Ann Sothern, who also was a bit curvy. Both actresses can be found in light comedic roles.

-Reginald Gardner, Reginald Owen, Reginald Denny (I’m still not sure which is which sometimes)

What actors do you confuse? What names can you not remember?  Let me know!

5 thoughts on “Just like the prince and the pauper…”