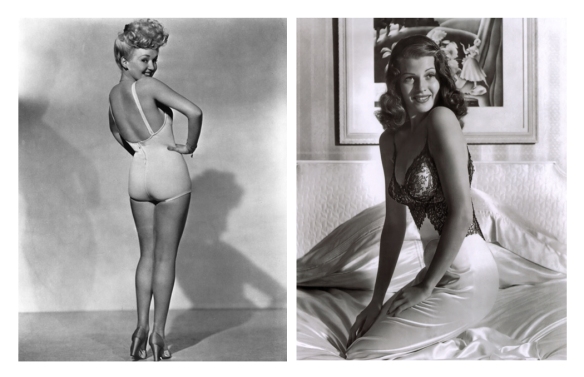 The two pin-up girls that almost all soldiers pinned on their barracks and hearts during World War II.  The two glamour girls duked it out to be Number 1 pin-up thanks to two famous LIFE photos.  Betty with her coy over the shoulder bathing suit glance, and Rita perched on a bed in lacy negligee.

This was no doubt the reason Grable was the top pin-up girl.  She had attainable beauty that soldiers could find in their wives and childhood sweethearts.

But though Grable wins in the pin-up photo battle, she may lose in other areas.

I adore Betty Grable so in the past week I’ve been watched both “Springtime in the Rockies” (1942), “Song of the Islands” (1942) and assorted YouTube clips of Betty. While watching these, I’ve noticed something that very much disturbs me. Betty Grable isn’t the best dancer.

In “Rockies” her dance numbers were good but not exciting. In “Song of the Islands” I felt like her hula dancing was a bit haphazard.  She almost frantically waved her arms and hips around. I will say the sand that she was dancing on looked like a hindrance. I was pleased to note that several of her hula moves were authentic based off my “Island Girll” work out DVDs.

In comparison, a recent clip I watched of Rita Hayworth and Fred Astaire dancing in “You Were Never Lovelier” (1942) or Hayworth dancing solo in “Down to Earth” (1947) were impressive to say the least.  Her moves were graceful and well thought out, and footwork was complicated but done with ease.  Hayworth was an excellent tap dancer, but-to be fair- she also had the upper hand since she was part of her father’s dance troop.

Grable can really sell a song and do a fun dance number, but when compared to her contemporaries like Rita Hayworth- Grable really falls short.

Here are too numbers I found to compare their dancing styles.

I chose these two clips for specific reasons:
1. Both Grable and Hayworth are wearing pants, so you can see their feet better
2. They are both meant to look like practice routines
3. Hermes Pan and Fred Astaire have very similar dancing styles

Both dance well, but I think Rita does a better job.  Astaire and Hayworth seem to be on the same skill level in their number while Pan is much more graceful than Grable.

What do you think?

10 thoughts on “Once more, Miss Grable?”