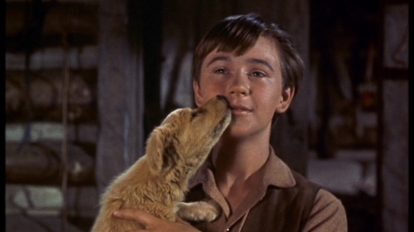 You may have seen him turning into a sheepdog on “The Shaggy Dog,” tragically killing his dog in “Old Yeller” or as the know-it-all brother in “Swiss Family Robinson.”

Life for fresh-faced, slightly goofy Tommy Kirk seemed sunny in those 1950s movies at Walt Disney Studios. He was one of the studio’s top stars and even was part of the Mickey Mouse Club in the “Hardy Boy” series with Tim Considine. He was wholesome, clean cut and quirky-things that easily won over Disney audiences.

But as Kirk grew out of those kid roles in the early 1960s, life started to drastically change. Like most child stars, the transition from family movies to teen movies can be difficult. Studios and audiences don’t like you because you aren’t as cute and are going through the awkward years of growing up. However, it’s harder for a child star when they are gay.

It was becoming apparent that adult Tommy Kirk was gay and this didn’t fit into Walt Disney’s family-friendly, perfect studio. 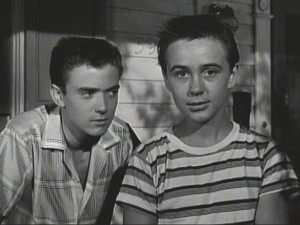 “Even more than MGM, Disney [in the early 1960s] was the most conservative studio in town. They were growing aware. They weren’t stupid. They could add two and two, and I think they were beginning to suspect my homosexuality,” Kirk said. “I noticed people in certain quarters were getting less and less friendly. In 1963 Disney didn’t renew my option and let me go. But Walt let me return to do the final Merlin Jones movie, ‘The Monkey’s Uncle,’ because those were moneymakers for the studio.” (Taken from IMDB)

Kirk said his teen years were a very unhappy time for him.  He had also been marked as box office poison after movies like “Village of Giants” (1965) and “Mars Needs Women” (1967).  Kirk’s career could have been saved by a potential role in “The Sons of Katie Elder” (1965) with John Wayne. Unfortunately, he went to a party where people were smoking marijuana. The party was busted, Kirk was arrested and newspapers printed “Ex- Disney Child Star Arrested for Pot.” He was fired from the film.

Not only was his career floundering, but once he accepted he was gay, he had no way to meet people or express himself.

“I knew I was gay, but I had no outlet for my feelings. It was very hard to meet people and, at that time, there was no place to go to socialize,” Kirk said. “It wasn’t until the early sixties that I began to hear of places where gays congregated. When I was about 17 or 18 years old, I finally admitted to myself that I wasn’t going to change. I didn’t know what the consequences would be, but I had the definite feeling that it was going to wreck my Disney career and maybe my whole acting career.

Though Kirk’s acting career went into the mid and late 1960s when codes and morals were beginning to loosen, there was no way for him to portray a gay man on screen.

Tommy Kirk and Annette Funicello. The two starred in several films together including “Pajama Party”

Quite on the opposite side, Kirk was in highly heterosexual all-American teenage romance beach films.  In “Pajama Party” (1964) with Annette Funicello, Kirk plays a Martian that doesn’t understand romance or how to woo women. Funicello’s character teaches the Martian-named Go Go- how to show affection in order to make her boyfriend jealous. Teaching Kirk how to romance a woman in a film almost makes me wonder if it was a jab at him.

Kirk quit acting by the early 1970s, saying that he got sick of it and stopped. He now runs a carpet and upholstery cleaning business, according to IMDB.

For a child star who struggled so much, Tommy Kirk is really forgotten today. Books like “Screen World Presents: Encyclopedia of Hollywood Film Actors” mentions in the last few sentences about his career, “It was not until years later that Kirk was fired after word got out about his homosexuality.”

Other books like “Queering Teen Culture” by Jeffery Dennis don’t discuss the hurt or ruin that Kirk experienced. The book mainly seems to focus on the silly roles he was in and how overly sexual the males were in beach movies.

For somebody that stared in most of the live-action Disney classics, you don’t hear anything about him. I wonder if it has to do with Disney still trying to keep appearances.

From interviews I’ve seen in recent years, Tommy Kirk seems to be bitter from the experience. I can’t say that I blame him.

It’s heartbreaking that such a bright young Disney star fell down so hard.

57 thoughts on “The story of Tommy Kirk”