The zany Betty Hutton we love performing her role as Trudy Kockenlocker in “Miracle of Morgan’s Creek” (1944) dragging William Demarest.

Bob Hope called her a “Vitamin pill with legs.”

Betty Hutton was one of the top stars at Paramount studios from the 1940s until the early 1950s. She was famous for her boundless energy and shouting style of singing.

“They all knew Betty didn’t just get up and sing a song,” she said in her autobiography. “I sang, I danced, and I climbed the walls. The only thing they didn’t know is how far I’d carry it once I got up there.”

She worked hard to climb to stardom and her fame rose quickly. However, it fell just as fast.  Hutton was only in 20 movies from 1942 to 1957.

Hutton describes this rise and fall in her autobiography Backstage, You Can Have: My Own Story, a book that was published posthumously in 2009, two years after her death in 2007.

The autobiography covers Betty’s unconventional childhood with her bootlegging mother in Lansing, Michigan and her rise to fame as the energetic girl singer for Vincent Lopez’s jazz band.  Hutton’s career jump started on Broadway with the second female lead in “Panama Hattie” starring Ethel Merman. Her Broadway career was brief though. Hutton was frustrated when Merman cut some of her show stopping songs, and was promised by songwriter Buddy DeSylva that he would make her a Paramount star. He stayed true to his words.

Hutton starred in several successful yet forgotten films, but she is best remembered for her roles in “Annie Get Your Gun” (1950) and “The Greatest Show on Earth” (1954). Unfortunately, when Hutton was at the top, she was also nearing the end-about to fall off her stardom pedestal. In the early 1950s, Hutton frustrated the press; upset the Paramount bosses and got involved in pills, all of which contributed to the end of a promising career.

“It was somewhere around the time we were shooting the film in Florida, that I took my first pill,” Hutton said. “I had just dissolved my marriage with Teddy. That coupled with the stress of working on the movie (Greatest Show on Earth), was getting to me. In addition, I was not at the weight I wished I had for the film. I don’t remember how I came upon my first Dexamil, but it was in Miami, and I took it to increase my energy level and reduce my desire to eat.”

By the 1960s, Hutton’s life as a movie star was long gone. She filed for bankruptcy, her daughters moved out and her pill addiction worsened.

“One morning I packed what I had left in the way of personal belongings in a paper bag, and headed out the door of my hotel room for the final time,” Hutton said.  “My room rent was already way overdue, and I had no means of raising the necessary money to pay the bill.”

This scene is the last we hear from Miss Hutton. She writes a note to the readers saying she is not sure if she wants to continue writing the book. Writing the book proved to be happy and painful, she said.

The rest of the book is written by Carl Bruno, who helped care for Betty off and on from the early 1970s until her death in 2007. Bruno’s partner was a Lutheran minister, Gene Arnaiz, who tried to help Hutton and allowed her to live with them in California. From 1974 until 1996, Hutton lived either in Rhode Island with Catholic priest, Father Maguire, or in California with Carl and Gene.

“Father was a Godly man, but he was a mortal all the same,” Bruno said. “There were times when Betty became too much for him…When Father felt it necessary, he would ship Betty back to the boys in California…Likewise, Carl and Gene would tire of her after a time, and back she would go to her austere lifestyle in the Rhode Island rectory.”

Betty Hutton died in 2007 in California of colon cancer while living with Carl Bruno and Michael Mayer.

My thoughts on the book: 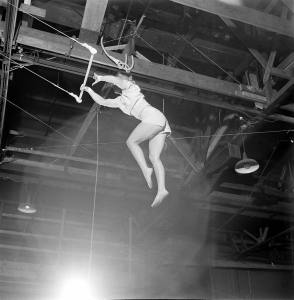 Doing her own trapeze stunts in “The Greatest Show on Earth” (1954), Betty’s last big film role.

What you see on the screen seems to be what you get with Betty Hutton. She had the same fiery, go get ‘em, energetic outlook when she talks about her career as her characters had in her films.  As Betty described her childhood, as she was fighting for her family and trying to make her way into show business, you wanted to fight along with her. I would put down the book and feel like I could face anything; Betty’s attitude is that infectious.

This autobiography is entertaining but depressing at the same time. At one point Hutton had me crying as she talked about visiting the boys overseas during World War II, and then laughing a few sentences later with the line, “We all know it’s common knowledge that movie stars don’t poop.”

Sometimes while reading I got frustrated with Betty. It was like watching a movie saying, “Oh no, don’t do that.” Quotes she said to newspapers, difficulty she gave the Paramount studio heads and the use of pills were painful to read about. I think the biggest thing that upset me in the book is when she turned down the role of Ado Annie in “Oklahoma” to do the TV spectacular “Satins and Spurs.” She later regretted turning down the role when she saw Rogers and Hammerstein were personally overseeing the film. I think that really could have jumpstarted her career. I also feel if pills hadn’t been in the picture, things would have been very different for Betty Hutton.

I have always heard about Betty’s bad relationship with her children and how they disowned her but that didn’t come up a lot in the book. Though she loved her children, Betty said she never should have tried to maintain both a career and her family.

I still enjoyed the book once Betty stopped writing and the remainder of her story was filled in by Bruno and Mayer, but I was a bit disappointed. I knew Father Maguire and the Catholic faith meant a lot to Betty and I was hoping to hear more about it in her own words rather than it being skimmed over that she lived with him.

Betty teaching daughter Lindsay how to swim in 1947.

Bruno and Mayer seemed to care about Betty, but some of the things they wrote seemed more “Oh woe is us; we had to put up with so much.” True, they did, but the book wasn’t about their trials it was about Betty. I also felt like they added a lot of asinine details that weren’t needed and could be potentially embarrassing for Betty. For an example, there was a brief anecdote about Betty goofing off in a long red wig and falling and breaking her glasses or that morphine made Betty throw up at the hospital. Neither story added anything to the story nor was there a point.

The book did clear up one thing that confused me during the time of Betty’s death in 2007. I remember when I saw Betty had died on Turner Classic Movies’ website; I looked around on the internet to find more news sources about it but could find nothing. Apparently, it was Betty’s wish not to tell the press about her death until she was buried. She thought that reporters would be hounding her until her death.

When Betty died, Bruno called family, friends and Robert Osborne, who Betty respected. The TCM website put up that Betty had died and their schedule change to honor her. The press and fans wanted confirmation of Betty’s death. Bruno and Mayer seemed miffed at TCM for this, but I wonder if they made Betty’s wishes clear. I feel like if they had, Osborne wouldn’t have put anything on the website.

Overall, the book was very good, but be prepared to feel hyped up at the beginning and pretty low at the end. Betty Hutton was one of the most energetic, talented film stars we know. It’s a shame that her life took such a turn.