My sophomore year of high school I had one of the best teacher’s I’ve ever had during my student career.

Her name was Leslie Pierce and she taught honors English. We read a lot of really boring books like “The Scarlett Letter” and “Ethan Frome” but she somehow made them exciting and described them like a daytime soap opera.

I remember Ms. Pierce drooling over Robert Redford in the “Great Gatsby” and Daniel Day-Lewis in “The Crucible,” turning the TV around during the steamy parts of the film “Ethan Frome” and playing us a silly rap of “The Raven.”

Her motto was “Carpe Diem”-seize the day. She would have her students stand on their desks like they did in “The Dead Poets Society.”  Ms. Pierce once was a dancer and excitedly talked to me when I wore my “Oklahoma” shirt after seeing the play at the Peace Center.  There were also humorous stories told about jackrabbits pelting her car as she drove through Indiana and the time she thought it would be a good idea to cut her eyelashes.

She was a crazy, intelligent, fun and interesting woman who genuinely loved English and her students. And in October 2005, Ms. Pierce killed herself. I found out during marching band practice and just pretended to play my clarinet because I was crying so much.

Ms. Pierce didn’t show up to school one day and the assistant principal and school police officer went to her home and found her. It came as a great shock as teachers and students, including myself, were inconsolable. I still tear up when I think about it and other times I swear I see her when I’m at the store or downtown.

I tell this story because Ms. Pierce seemed like a wacky, happy person but her death showed you never know what’s going on inside a person. And I’d like to draw a parallel to actress Carole Landis.

Miss Landis was a vibrant, beautiful young star in the late 1930s and 1940s, starring in films like “Moon Over Miami” with Betty Grable and “Four Jills in a Jeep,” a film based off a book she wrote.  Landis was friendly, well-liked and traveled overseas during World War II.

Landis was found dead at on July 5, 1948. It was been ruled suicide by overdose of sleeping pills, but her family isn’t convinced.

Carole Landis was discovered in her apartment after a big Fourth of July party followed by an intimate dinner with Rex Harrison.

Rex Harrison and Carole Landis had been involved in a widely known extra-marital affair. At the time, Harrison was married to actress Lilli Palmer. Landis and Harrison had broken up and recently gotten back together around the time of the party.

On the Official Carole Landis website, run by her great-niece, the Landis family is convinced that Rex Harrison murdered her to avoid scandal surrounding the affair they’d been having.

“Aunt Carole’s death has haunted my family for 62 years and knowing Rex Harrison never paid for what he did only makes it worse. We may never know the truth about her death but we do know that the official version just doesn’t make sense.”

Here are a few reasons the Landis family suspects murder: 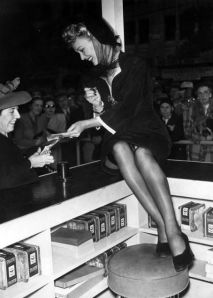 •Carole was happy and friendly. This means she couldn’t have depression like people say.

•Carole was dating actor Turhan Bey after her affair with Rex Harrison ended. They say Harrison was the one who came back to her to rekindle the romance.

•The Landis family doesn’t think Carole would have a large, expensive Fourth of July party if she was planning on killing herself. Carole was quoted as saying that she had never been happier.

•Carole had made a few suicide attempts in the past but the website describes them as “attention-grabbing” for publicity and family. These suicide attempts were supposedly Carole’s version of a temper tantrum.

• Rex Harrison was the last person with Carole and the first one to find her body.

• Rex Harrison apparently lied to and paid the police and told them he was just friends with Carole.

• Newspaper clippings in years following her death wrote about new evidence, but police dismissed it and Carole’s police record is missing. 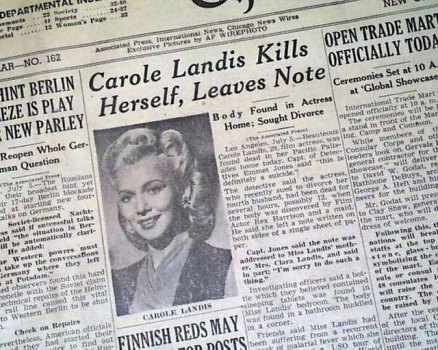 The problem with all of these explanations is that we never know what someone is experiencing. Just because Carole seemed happy, doesn’t mean she was. There is another side to almost all of the explanations:

•Saying Carole was happy and friendly to her friends doesn’t mean she wasn’t inwardly depressed. Look at my description of Ms. Pierce.

•Actor Turhan Bey was a lady’s man and dated everyone. Singling him out as Landis’s boyfriend is silly, particularly during studio era Hollywood when actors and actresses were frequently set up on dates for premieres or publicity (i.e. June Allyson and Van Johnson, Tab Hunter and Natalie Wood).

• Claiming that a divorce would ruin Harrison’s career is an interesting speculation, granted that many actors were married and divorced frequently in Hollywood. Harrison did eventually divorce his wife Lilli Palmer in 1957 to marry Kay Kendall.

•Dismissing suicide attempts as “attention grabbers” is ridiculous. These were a cry for help and a warning sign.

• In regards to the Fourth of July part, it’s possible that she spent so much money on a party with her friends because it was her way of saying goodbye. Carole may have “never been happier” because she knew she was ending her troubles.

• As far as Rex Harrison lying, being the first to find Carole and her police record missing, I don’t know. There may be explanations to this either way. It’s possible her studio bought the police record to avoid scandal. In quotes by Esther Williams below, Harrison’s lies were constructed by studio publicity agents and he was most likely told to say these things.

•Esther Williams did discuss the incident in her autobiography “The Million Dollar Mermaid: An Autobiography” but she doesn’t exactly say that Lilli lied. Williams discusses being at Palmer’s house waiting for Rex to come home to discuss business with him. The two women talked until 2 a.m. but he never returned so Williams went home:

“His (Rex Harrison) affair with Carole Landis was the worst-kept secret in Hollywood. The gossip columnists referred to them as the ‘English star whose name begins with an H and the local glamour girl whose name begins with L.’ Glamour girl was putting it mildly-Landis was not exactly a paragon of virtue….At the age of twenty-nine she was already a waning starlet who was separated from her fourth husband….

The following morning the scandal broke-Miss L was dead. Carole Landis had committed suicide by taking an overdose of sleeping pills. The newspapers conjectured that she became despond because Rex Harrison had told her their affair was over. There was some factual underpinning for this speculation-Rex was leaving Hollywood for New York to appear as Henry VII in the new play “Anne of the Thousand Days”….

Lilli knew, as I did, that Rex must have been with Carole the night of the suicide…Lilli knew that her husband had been having an affair, but she kept her head high through the maelstrom that followed…She answered questions from the press and stood by him through the coroner’s inquest…The two of them denied that there was any romantic relationship with Landis at all. Rex and Carole were just ‘good friends’…” (164-165).

Williams tells how the studio created an alibi for Harrison and Palmer the weekend Landis died and Palmer does discuss this in her autobiography “Change Lobsters and Dance.”  Studios were very powerful during that era and could quickly cover something up if they felt the need to.

Carole Landis also left a note, apologizing to her mother, which was published in the newspaper.

Before reading this website, I had never heard claims Landis was murdered. Robert Osborne has even said that Landis committed suicide as did LIFE magazine.

If you look at the website, it discusses the special relationship she had with her sisters and mother, shows pictures of her grand niece wearing Landis’s jewelry and short bios of Landis’s relatives dead and living.

Maybe I would also take the murder claim more seriously if I didn’t wonder if the family or other parties were trying to somehow capitalize off Carole Landis with their grief.

I also feel the family might not fully accept suicide as a possibility because of the stigma, particularly during the 1940s.

However, the only two people who know the truth are dead. Though while people still doubt it, the evidence points to Carole Landis taking her own life.

I understand missing a loved one, but I think it is time to let Carole Landis rest. Why not remember the joy she brought to film audiences and servicemen?

We never truly know what people are going through. If you or someone you know needs help, please call the National Suicide Prevention hotline at 1-800-273-8255. It’s free and available 24/7.

42 thoughts on “What happened to Carole Landis?”