For my third evening of birthday favorite films I chose: 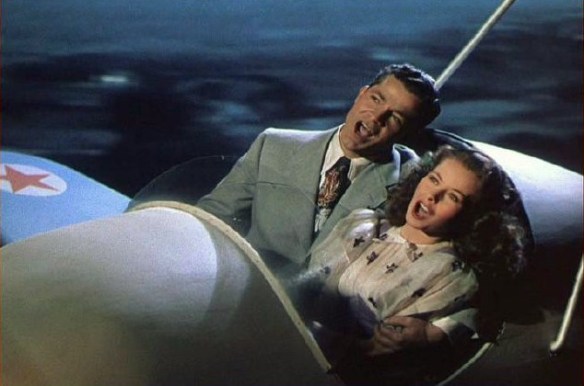 "It's a grand night" for State Fair

Brief plot: The Frank family travels to the annual Iowa state fair, entering their prize hog, minced meat and pickles into contests. The two children find romance at the fair, but it is uncertain if it will continue once the fair ends. The cast includes Fay Bainter, Charles Winneger, Jeanne Crain, Dick Hyames, Dana Andrews and Vivian Blaine.

Why I love it:

“State Fair” isn’t a high-brow film chock full of symbolism and deep meaning, but its one of my favorites.  It makes me happy no matter what, and that’s what entertainment is about.

Music: I’m a huge musical fan-viewing 432 in the past 8 years. There isn’t a song in this musical I don’t like. “It’s a Grand Night for Singing” is my favorite song in the whole movie. It’s a bit repetitive and very simple, but its a happy, ethereal song. Another close favorite is “It Might As Well Be Spring.” “State Fair” is a Rodger’s and Hammerstein musical, something that most likely surprises R & H fans. It’s very different than their other long, 9 song, operatic musicals. I think State Fair is a musical written for the average American. The songs are written like popular radio songs, easy for the average person to sing and fit the plot of farm families heading to the annual fair. If we had pig farmers singing show stopping, big budget musical numbers, I probably wouldn’t like this movie very much.

Characters/Cast: Everyone in this movie is perfect. Fay Bainter and Charles Winninger(Melissa and Abel Frank) are perfect as a sweet, loving farm couple. Jeanne Crain, as their daughter Margy,  looks her prettiest in this movie and it’s nice to see Dick Haymes in this movie as Wayne. He has a wonderful singing voice and we don’t get to see him in many films-he may have been a bigger star except for personal problems. Vivian Blaine (as Emily Edwards) is beautiful and I love her as a red-head. She was very talented and I wish she could have been in more films. But my favorite character and actor in this movie is Dana Andrews-he is so charming, rugged and handsome as reporter Pat Gilbert. I just adore him. 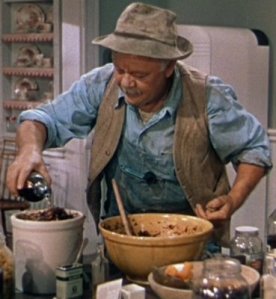 But most of all I love all the mini cameo’s of well-known character actors. Frank McHugh pops up as a song plugger. It’s weird seeing him in color, after becoming so used to him in early 1930s comedies. He is funny as ever particularly when he and Wayne get drunk. During the hog judging at the fair, we see Will Wright as one of the judges. We see Wright a few times in “Andy Griffith” grumpy old man Ben Weaver, but can be spotted in uncredited roles in 1940s and 1950s. Henry Morgan plays a carny working a side show game who conned Wayne the year before. Wayne returns to get even after practicing the game all summer and humiliates Morgan. It’s a very humorous scene particularly when Morgan starts shouting, “We’re having fun here!” as everyone is walking away.
Of course, the best character actor role in the whole film is Donald Meek as the minced meat judge who eats too much of Melissa Frank’s alcoholic minced meat and gets drunk. He is hilarious!

Humor: This movie is very sweet and poignant but has several funny scenes.  One of the funniest scenes is at the beginning. Melissa Frank doesn’t want to add brandy to her minced meat so Abel adds some when she isn’t looking. Then after he leaves, she adds even more! The result of course is Donald Meek getting drunk of the minced meat.
Another funny scene is the first “It Might As Well Be Spring” reprise with Margy in the gazebo on the farm. She’s thinking about a man and thinking he’d be like “Ronald Colman, Charles Boyer and Bing” and then each of those actors have small speaking cameos as she’s imagining it. Then when her yucky boyfriend Harry (Phil Brown) comes over and sees the prize hog Blue Boy. Harry says: “Blue Boy’s the biggest boar in the world I bet!” and Margy says: “All depends on how you spell it.” That always gives me a good laugh.

Margy and Pat are the cutest.

Nostalgia: State Fair is a very sweet, poignant and honest movie filled with slices of 1940s American life. Fay Bainter sings a little at the beginning, she doesn’t have the best singing voice in the world but somehow that part shows that she’s a simple, hardworking country mother. Wayne practices for the carnival game using his mother’s embroidery hoops. Margy doesn’t want to live on a big scientific farm with Harry and wants a simple, loving life.  The fair looks clean, exciting and perfect. Waynes dances at the little nightclub at the fair. Mrs. Frank’s minced meat wins first prize and she cries happy tears. The way Abel Frank cries when his hog Blue Boy wins first prize pig (that part gets me every time).  And when Abel and Melissa Frank try champagne for the first time and say ,”It’s better than any of that French stuff.” All of those simple moments in the movie make “State Fair” perfect. They are all so sweet and make me want to travel back in time and live just like that. 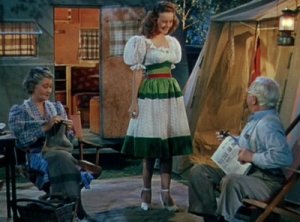 Margy's green dress on the last night of the fair.

Fashion: Like with “Shadow of a Doubt,” I love the clothes in this movie. Margy wears the cutest outfits and my mom ‘oooo’ and ‘ahhh’ over them every time we watch the film. All of her clothes are cute and colorful but not too glamorous for a farm girl.  Most of her outfits are peasant dresses, pinafores or jumpers. My favorite outfits are the simple white peasant blouse and blue skirt she wears at the beginning while singing “It Might As Well Be Spring,” the red dress she wears during the minced meat judging, the green dress she wears the last night of the fair and the blue jumper with the yellow blouse at the very end.  I also love those sports coats that tie around the waist- both Dana Andrews and Dick Haymes wear.

To review: “State Fair” is a perfect, honest film. The only thing wrong with it is that it doesn’t go on forever. The color, the slice of life it offers, the music and the characters all put a smile on my face. The only thing that makes me sad about this film is that life isn’t like that today.

Okay, I'll admit-I tear at the end. And I wish I was Margy right here.

This concludes Night 3 of Birthday Blogathon Week. Please stop by again tomorrow for another favorite film of mine!