Here is my post for my blogathon I am hosting, Gone Too Soon-dedicated to film stars who died before the age of 50.  Nearly 40 bloggers have contributed to this event! Be sure to read all of the other posts here. 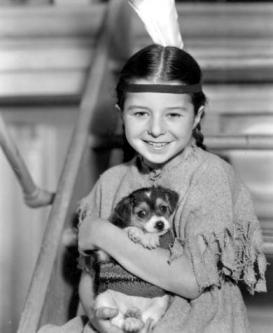 Virginia Weidler was a better child actress than Shirley Temple.

There I said it, and you may call me blasphemous if you would like, but let me explain.

Historically, Shirley Temple is more important. She made filmgoers happy during an economically difficult time. Even President Franklin Roosevelt was quoted as saying America couldn’t have gotten through the Depression if it hadn’t been for Shirley Temple.

But aside from that, what does Shirley have besides being adorable with dimples, giggles and curls?

While 1930s and 1940s child stars like Shirley Temple, Sybil Jason and Juanita Quigley (or Baby Jane) were merely cute, Virginia Weidler was a bona fide actress at a young age.

Actresses like Jason acted with Warner Brothers’ top star Kay Frances but merely as Frances’s daughter with minimal screen time. Shirley Temple also acted with big named stars such as Alice Faye or Randolph Scott, but they were generally window dressing for a Temple extravaganza.

Weidler held her own (and arguably stole the scene) in films with top celebrities like Joan Crawford and Norma Shearer in “The Women” (1939); Katherine Hepburn, Cary Grant and James Stewart in “The Philadelphia Story 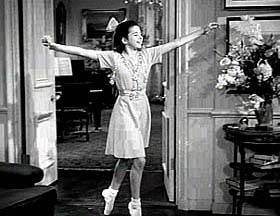 Stealing a scene in “Philadelphia Story” (1940)

Take “The Women” (1939): Virginia Weidler (as Little Mary) is staying with her father and new stepmother Joan Crawford (Crystal Allen). Crawford is in the tub and wants Weidler to help her scrub her back. Weidler shows her disdain and isn’t as obedient like most children of her era would have been expected to be.  Later Crawford shoos her out of the bathroom when she gets a phone call. Weidler quips, “I don’t understand grownups on the telephone. They all sound silly.”

Mary Haines: I’ll be doing the cooking so you know what father will get.

Weidler’s comedic comebacks in her films are as quick and sophisticated as adult lines.

Several child actors of the time only played small roles as sons and daughters or predominately in children’s movies, such as the Andy Hardy series. 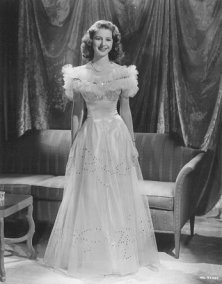 While some of Weidler’s later films were teen fluff like “Babes on Broadway” (1941), “The Youngest Profession” (1943) and “Born to Sing” (1942), Weidler’s early films were more serious. She even acted alongside The Great Profile, John Barrymore, in one of his last films, “The Great Man Votes” (1939).

Though Weidler grew up to be a lovely young woman, her film career ended with musical “Best Foot Forward” (1943) at the age of 16. According to IMDB, her career was partially shortened when budding teen beauty Shirley Temple was signed to MGM, where Weidler was under contract.

In 1947, Weidler married naval officer Lionel Krisel and she retired from show business.

“[When asked about her career in later years,] Virginia would always change the subject as quickly as possible without being rude. She never watched her old movies or replied to requests for interviews. Although she was never one to criticize, I think our boys got the impression that their mother didn’t think very much of the motion picture industry,” said her husband.

Weidler suffered from a heart ailment for many years and died of a heart attack in 1968 when she was only 41 years old.

Though she had long since been retired from films, her snappy comebacks and wisecracking characters will always be remembered with film greats including Claudette Colbert, Bette Davis and Myrna Loy.