The moody young star took the cinema by storm.

Actor James Dean won over audiences as misunderstood teens in the films “East of Eden” (1955) and “Rebel Without a Cause” (1955). 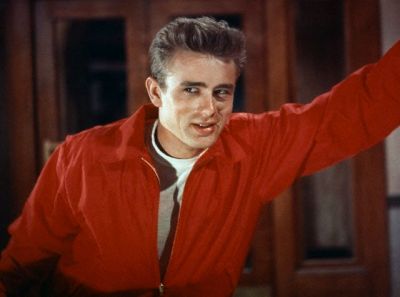 Actor James Dean in a publicity still for “Rebel Without a Cause.”

Dean had just finished up filming his third and final film, “Giant,” the epic based on Edna Ferber’s book and co-starring Elizabeth Taylor and Rock Hudson.

Dean purchased the Spyder on September 21 for $6,900 from Competition Motors in Hollywood and traded in his Speedster 356. The Porsche included an entirely hand-built, air-cooled engine, according to “James Dean” by George Perry.

Several of his friends, including actress Ursula Andress, refused to ride in the car. When Dean drove the Porsche on the Warner Brothers studio lot on September 23, director George Stevens told Dean that he would kill someone if Dean drove the vehicle on the lot again.

“You can never drive this car on the lot again. You’re gonna kill a carpenter or an actor or somebody,” Perry quoted Stevens. It was the last time Stevens saw Dean. 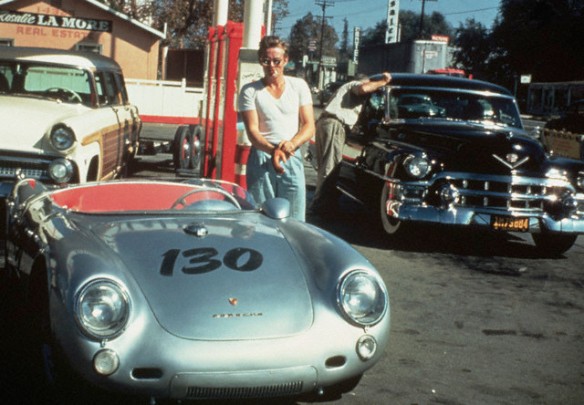 Dean the morning of his fatal crash.

Actor Alec Guiness also supposedly told Dean on September 23 that he would be dead within a week if he continued to drive the Porsche.

Dean only owned the “Little Bastard” for a little over a week before his death.

The Porche 550 was the first purpose-built race car produced by Porsche. Dean bought the 55th of 90 Spyders made from the factory, according to “History’s Greatest Automotive Mysteries, Myths, and Rumors Revealed” by Matt Stone.

Dean decided to race the Spyder in Salinas. Originally the car was going to be towed by a Ford station wagon, but in a last minute decision, Dean decided to drive the Porsche convertible to Salinas, Perry wrote. 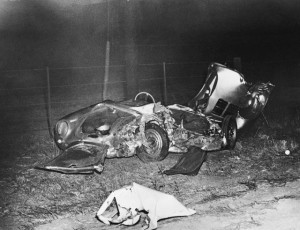 The wrecked remains of James Dean’s Porsche 550 Spyder at the site of the accident. The 24-year-old film star was killed on the evening of September 30th when his car collided with a college student’s automobile at an intersection 28 miles east of Paso Robles, California.

At 5:45 p.m. on September 30, Dean collided with a Ford coupe driven by college student Donald Turnupseed at an intersection 28 miles east of Paso Robles, CA.

The cast of “Giant” was gathered to watch the dailies of their filming when Stevens received the call about Dean’s death. Actress Elizabeth Taylor threw up in her dressing room and was so grief stricken that she had to be hospitalized, Perry wrote.

Dean’s Porsche flipped and he sustained a broken neck along with external and internal injuries, according to the inquest on Oct. 11, 1955.

Police at the scene said speed was not involved and it was impossible for Dean to avoid the crash, according to Perry’s book.

Since September 1955, many rumors have surfaced of the supposed “cursed” wrecked remains of Dean’s Porsche 550 Spyder.

Car designer George Barris is said to have purchased the remains of “The Little Bastard” for $2,500. Barris is the source of several of the “curses.”

“Everything that car has touched has turned to tragedy,” Barris is quoted in Stone’s book. “

Some of the curse stories include:

-After the totaled Porche was purchased, Barris said the vehicle slipped off the trailer and broke a mechanic’s leg.

-Barris said he sold parts from the Porsche to Beverly Hills doctor Troy McHenry and Burbank doctor William Eschrid. The two men were racing against one another in separate vehicles that both had parts from the Porsche 550. McHenry lost control of the car, hit a tree and was killed. Eschrid, who was driving with Dean’s engine, was also injured in a wreck during the race.
This story seems to be true based on an Oct. 24, 1956, article in the Spokane Daily Chronicle. After the accident, Eschrid is quoted as saying he is not superstitious about using Dean’s engine and parts.

-Barris had two tires from the 550 and sold them. The tires apparently both blew out simultaneously causing the new tire owner’s car to run off the road.

-Barris kept the Porsche and two people tried to steal parts. Barris said one of the suspect’s arms was torn open trying to steal the steering wheel and the other was injured trying to remove the bloodstained tartan seat.

-In 1959, the “Little Bastard” was put on display by the California Highway Patrol for a safety exhibit. Supposedly, the patrol garage that housed the Porsche caught on fire, according to “The Death of James Dean” by Warren Newton Beath.

While the various curses are interesting, I’m inclined to think that many of them are made up stories. The only one that is true and has credible documentation is the death and injuries of McHenry and Eschrid.

However, the mystery and myths that still revolve around James Dean even today show his effect on pop culture and influence in film history.

What do you think? Do you believe the curse? Comment below.

Actor James Dean gives a thumbs-up sign from his Porsche 550 Spyder, the Little Bastard, while parked on Vine Street in Hollywood. Dean, who had taken up racing the year before, owned the car only nine days when he lost his life in a fatal highway accident while driving the Porsche to a Salinas race.