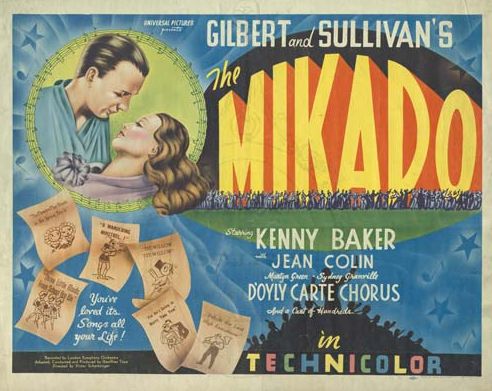 Plot:
Set in Japan, Nanki-Poo (Baker), a prince disguised as a wandering minstrel, falls in love with Yum Yum (Colin).However, she is engaged to the Lord High Execution. Nanki-Poo is set to be executed because he is in love with an engaged girl.

Trivia:
-Written by composers Arthur Sullivan and W.S. Gilbert, “The Mikado” originally opened in London in March 1885 at the Savoy Theater and ran 672 performances.
-Aside from Kenny Baker, many of the players in the film were from the D’Oyly Carte Opera Company, a professional company that opened in the 1870s and closed in 1982. The company staged Gilbert and Sullivan operas.
-Rereleaed in theaters in 1949.
-Nominated for an Academy Award for Best Cinematography, Color by William V. Skall. The film lost to “Gone with the Wind.”
-Nominated for the Mussolini Cup for Best Foreign Film at the Venice Film Festival. 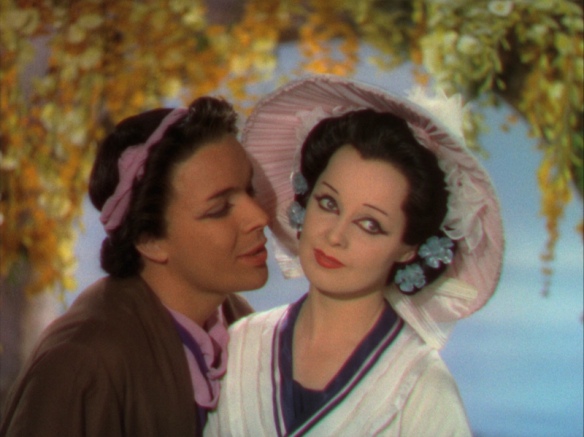 Kenny Baker and Jean Colins in “The Mikado”

My Review:
I watched this movie back in September and I have had to sit on it that long, figuring out what to say.
Simply put: “The Mikado” was boring, stupid, odd and all the songs sounded the same.
I have always heard of “The Mikado,” but I never knew what it was about. The whole hour and a half film is debating if they should kill Nanki-Poo (Baker) for loving an engaged girl.
The execution is discussed in a jovial manner. I understand dark comedies and usually enjoy them, but this was plain annoying.
While taking into consideration that this musical was written in the late 1800s, the supposed Japanese names are ridiculous. I mean…Yum Yum? This is a musical that is still performed, which honestly surprises me for the blatant disregard for Japanese culture and mockery of it.
I was ready for this movie to end from the moment I started it. I only continued watching it because I wanted to see if it would get better, and it didn’t.