When I first started getting interested in classic films, my mom would get excited about movies she wanted to introduce to me. “Gidget” (1959) was one that she could hardly wait to show me. 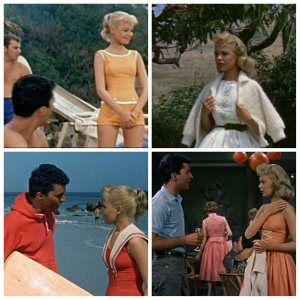 Views of Sandra Dee in some of my favorite swimsuits and dresses from “Gidget.”

Sitting there on a Sunday night at age 14, I fell in love with this film. It’s an explosion of color on the gorgeous backdrop of Malibu beach. It features awesome surfing shots and has excellent cast filled with one-liners that are real gems. It’s the perfect fun-in-the-sun Southern California travelogue. To date, it also has one of my favorite film wardrobes.

The movie was pivotal in my film love and got me further entrenched in 1960s pop culture. I read up on famous surfers, researched surfer lingo, listened to the Beach Boys, plastered 1960s surf images around my room and hunted for bathing suits that gave off a 1960s vibe. Of course, I wanted to learn how to surf, which has still never happened since I live four hours away from the beach on the east coast.

“Gidget” is the story of a teenage tomboy, Francie Lawrence (Sandra Dee), who isn’t interested on going on “man-hunts” with her shapely female friends. Up until this summer, her extracurricular activities involved playing the cello and making straight A’s in school. Her dismay with her one-track-minded friends leads to joining a group of male surfers, much to their chagrin. Once they realize she’s interested in surfing and can hold her own in their group, Francie becomes their mascot and is nicknamed “Gidget”- the girl midget. Most of the boys live for surfing and some are “surf bums,” living on the beach all summer with the Big Kahuna (Cliff Robertson) as their leader. Of course, Gidget’s summer doesn’t come without romance, as she is smitten with Moondoggie (James Darren).

On the surface, this is a teen beach romance. However, the film is also exploring if should Gidget follow the mainstream and chase boys with her friends or if she should do what she loves as one of the few females surfing in Malibu. Gidget’s loving but concerned parents (Arthur O’Connell, Mary LaRoche) support their daughter in her new outdoor activity but are still concerned about the type of people she is hanging around.

While “Gidget” may seem like a piece of fluff, this film was not only influential in the life of an impressionable 14 year old, but also in American culture. The first film started a popular franchise of “Gidget” sequels and television shows. But outside of the sequels, it also spawned a film subgenre of beach party films. These mainly low budget teenage beach films featured attractive teens in bathing suits, surfing, slapstick comedy and performances from popular 1960s musicians.

Every surfing film from “Beach Blanket Bingo” to “The Endless Summer” was a result of “Gidget,” though “Gidget” remains to be one of the better beach films. But it didn’t stop at movies; the popularity of beach music such as Dick Dale, The Ventures or the Beach Boys was also a direct correlation.

However, “Gidget” wasn’t just a story that started a popular franchise and culture. It was all based off a southern California teenager who wanted to write a story about her summer. 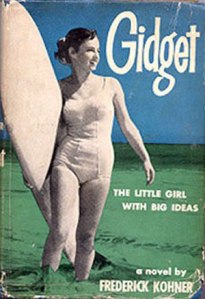 Cover of the 1956 by Frederick Kohner- featuring Kathy Kohner- about his daughter’s surf adventures.

The film is based off the 1956 book “Gidget: The Little Girl with Big Ideas” by Hollywood screenwriter Frederick Kohner. Kohner’s 15-year-old daughter, Kathy, started surfing one summer and would share her beach stories with her father. When Kathy wanted to write a story about her adventures as the mascot “Gidget,” Kohner offered to write it for her. It took Kohner six weeks to write the book which involved reading excerpts from her diary, listening in on phone calls (both with her permission) and conversations with his daughter. Kathy shared the nicknames of the surfers and the surfer slang, from “kuks” to “bitchin’” to “shootin’ the curl.” The book became a bestseller and spawned the film.

The real Gidget was fairly amused by the film, writing in her dairy, “Saw Gidget today, it was funny.” Kathy said in “Hollywood Surf and Beach Movies: The First Wave” by Thomas Lisant that she had never heard of Sandra Dee, but when they met she was very sweet. The sweet, innocent Sandra Dee character was a far cry from her experiences at the beach. In the book, Gidget talks about wearing a particular sweater to make her breasts look perky, smoked cigarettes or frequently uses the word “bitchin’” to describe the waves.

Sandra Dee as Gidget with the real Gidget, Kathy Kohner in 1959.

“It was quite funny seeing Sandra Dee and these other people acting in a movie that some of us lived,” Kathy said in Lisant’s book. “I think Miss Dee did an outstanding, memorable job and captured a moment in time…I am a real person. I’m shorter than Dee and have dark hair. I was a bit tenacious and bit fearless…Certainly I had a different personality but of all the actress that played Gidget, Sandra Dee came the closest in capturing my experiences from surfing to wishing my breasts would grow bigger to my relationship with my parents.”

As the surfing subculture reached mainstream, the once calm Malibu were overcrowded. The number of surfboards in the water seemed dangers to Kathy, according to Lisant. Once the film was released, Kathy was in college at Oregon State, but the real Gidget stopped surfing in 1960. The beaches were over populated with the craze that she unintentionally began.

Photos below from an Oct. 28, 1957, LIFE photo spread on Kathy Kohner and her father: 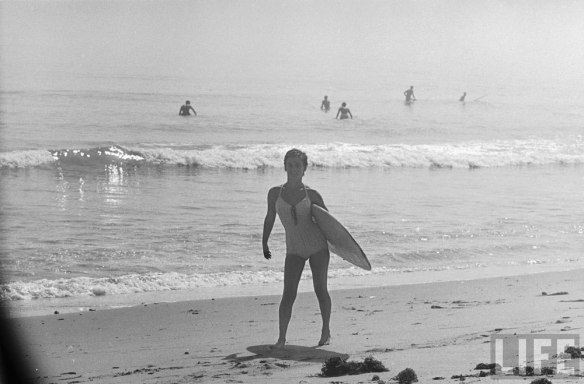 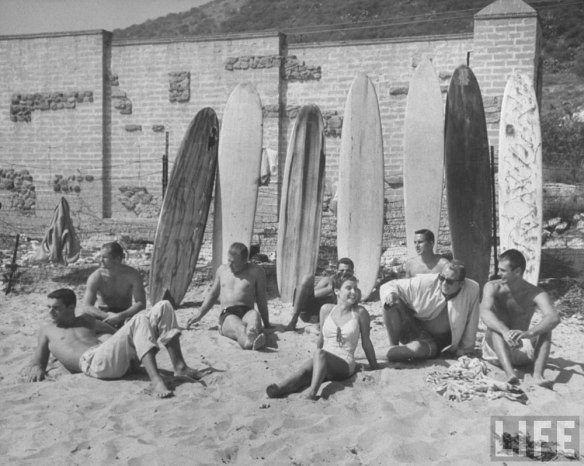 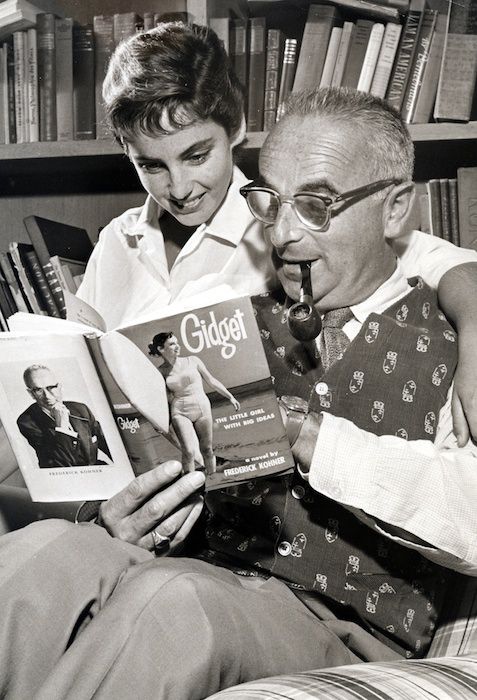 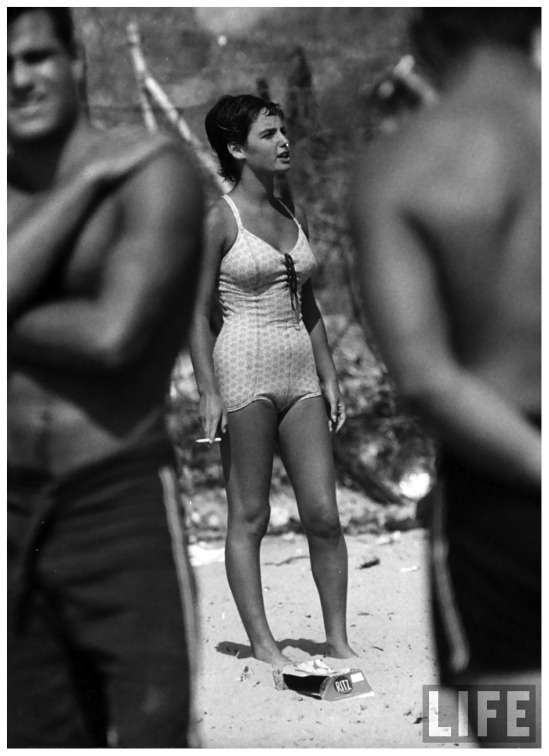 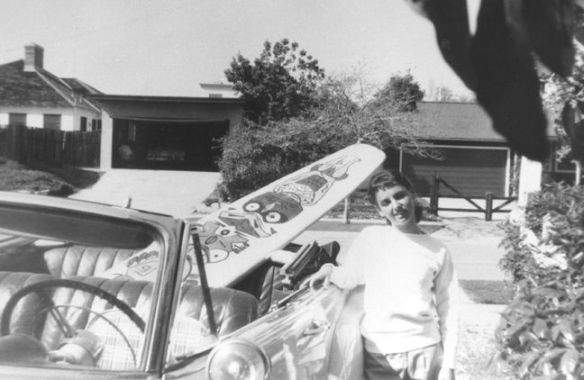 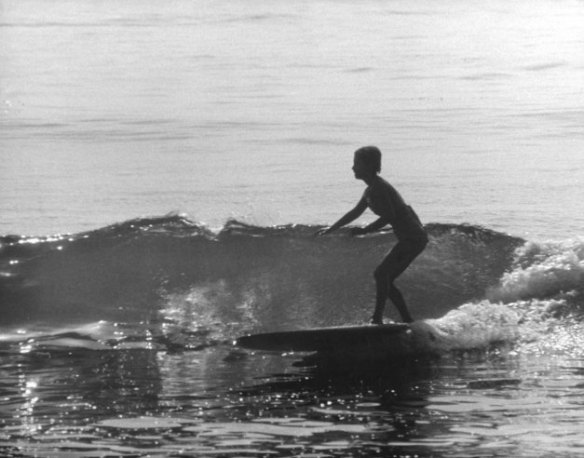 1 thought on “Gidget: Bringing the Surf Culture to Mainstream”