The same year Peggy Ann Garner performed her award winning role in “A Tree Grows in Brooklyn,” the 13-year-old actress found herself in a coming of age comedy, “Junior Miss” (1945).

Similar to “And So They Were Married” (1936), Christmas is merely a backdrop to adolescent antics in “Junior Miss” (1945), but the holidays play larger roles in this coming of age film.

Garner plays Judy Graves, a 13-year-old little girl desperately trying to be grown up. But she still leaves her roller skates in the New York apartment lobby, much to the dismay of a grocery carrying janitor, and pastes Tyrone Power photos in the elevator in an effort to brighten it up.
In well-intentioned efforts to help out her family, Judy’s meddling ends up muddling everyone’s affairs. Judy is helped by her pest of a friend, Fuffy (Barbara Whiting).

The family includes senior in high school. Lois (Mona Freeman). who also puts on airs of sophistication and has a revolving door of teenage boys coming to take her on dates. Father, Harry (Allyn Joslyn), is a stressed out lawyer and their mother (Sylvia Field) is constantly trying to smooth over the issues in her family. There is also a mysterious Uncle Willis (Stephen Dunne) who disappeared for a few years due to some troubles and suddenly turns back up.

Harry has a demanding, shouting boss, J.B. Curtis (John Alexander), who is also treats his grown daughter Ellen (Faye Marlowe) like a child. After overhearing a conversation between her father and Ellen, Judy mistakenly believes her father and Ellen are having an affair. In an effort for what she believes will keep her family together, Judy tries to throw Ellen and Willis together in romance. 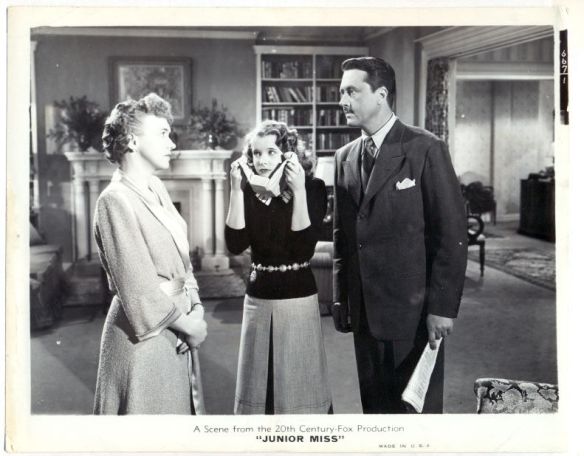 Sylvia Field, Mona Freeman and Allyn Joslyn in “Junior Miss” (1945). Freeman is holding ice to her neck to avoid a sagging chin.

While largely forgotten now, this is an enjoyable little film with some funny scenes. I particularly enjoy Allyn Joslyn’s character of the harried father. Mona Freeman probably has 10 different fellows come to pick her up for dates during the 90 minute film and Joslyn quicks, “They come and go all day long.”

Peggy Ann Garner, 13, in a publicity photo for “Junior Miss”

Almost the most puzzling piece of this film to me was that Peggy Ann Garner and Mona Freeman were the biggest names on the bill. Prior to this film, I had never heard of Faye Marlowe, Stephen Dunne or Sylvia Field who filled out the adult leads.

“Junior Miss” comes from a story written by Sally Benson, who also wrote the story “Meet Me in St. Louis” and contributed to the screenplay of Alfred Hitchcock’s Shadow of a Doubt (1943).

Prior to the 1945 film, Junior Miss was staged in 1941 by Moss Hart at Broadway’s Lyceum Theater. New York Times film critic Bowsley Crowther noted in his film review that the play is more effective. It was again reprised as a TV musical in 1957 during the “DuPont Show of the Month” and starred Carol Lynley in the role of Judy with Don Ameche, Joan Bennett, Jill St. John, Dianna Lynn and David Wayne, according to The Great American Playwrights on the Screen by Jerry Roberts.

While cultures and expectations of young women have changed since 1945, one thing stays the same: Growing up is hard. Peggy Ann Garner, who was 13 when this was filmed, exhibits this well as she tries very hard to show she is a grown up lady.

The Christmas morning scene as Judy and her family open presents displays it best. Judy excitedly receives her first pair of high heels, pomegranate colored lipstick, a coat lined with real fur, and a kit with eyebrow tweezers and nail polish.

Peggy Ann Garner with the doll on Christmas morning.

Harry’s boss gave the family presents and his gift to Judy is a doll. Judy and her sister Lois scoff at the doll and Judy says she is no longer a child and says she’ll donate it to some needy child. But once Judy is left alone, she picks up the doll, strokes its hair and hugs it. It’s a sweet and poignant moment, showing that she is still a sweet little girl.

The movie also delves into young girls as they try to impress boys. Judy has to meet Haskell Cummings, Jr. (Scotty Beckett) so he can decide if he likes her enough to take her to a dance. And each time a young man comes to see Lois, she acts like the lady of the house, introducing them to her parents.

Judy and Fuffy think they’ll get drunk from a few sips of champagne on New Year’s Eve.

Christmas and New Year’s are just a setting for the film but both have major scenes in the film. “Junior Miss” premiered in theaters in June, so I’m not sure if there is any compelling reason why this is set during the holidays—other than the fact that it makes it more nostalgic and homespun.

The movie does start with Judy discussing that she wants ice skates for Christmas and making an ice skating date with Ellen for Christmas Day. This ice skating date is when Judy connects Ellen with Willis. Lois has a date on Christmas Day to go to church with a young man. The scene where he picks her up is humorous, as he carefully takes a new cigarette case out of a pouch, because he obviously just got it and doesn’t want to mess it up.

New Year’s Eve and Day are also prominent scenes. Mr. and Mrs. Graves are out for New Year’s Eve with the boss. Judy and Fuffy are do dishes at a party and drinking champagne left in glasses in an effort to feel grown up. On New Year’s Day, Mr. Graves is comically hung over and Lois puts on airs acting like she was at a ragger of a party. New Year’s Day is probably the turning point of the film, as this is when J.B. Curtis learns Ellen has been dating a man behind his back.

While I’ll admit some of the meddling and confusion created by our “Junior Miss” in this film can be exhausting—and the character of Fuffy is annoying—this film is a poignant little coming of age story.