This week’s musical:
Duchess of Idaho–Musical #24 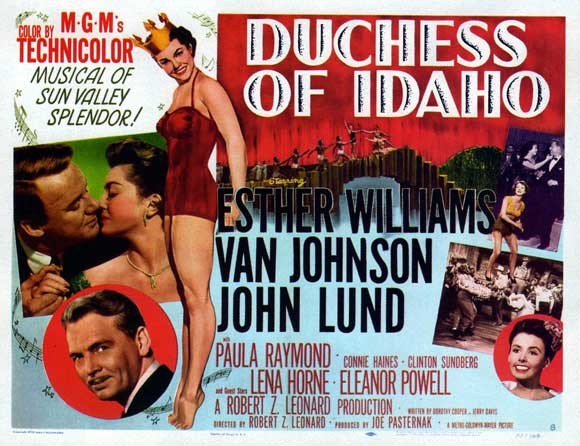 Plot:
Secretary Ellen Hallit (Raymond) is in love with her boss Doug Morrison (Lund), who constantly has Ellen pretend to be his fiance to get him out tight spots with women. In an attempt to play matchmaker, Ellen’s roommate and best friend Christine (Williams) travels to Sun Valley, Idaho, where Doug is also vacationing. Christine’s plan is to get Doug to fall in love with her, so he will call on Ellen to help him out. However, things get more complicated when Christine meets and falls for bandleader Dick Layne (Johnson). 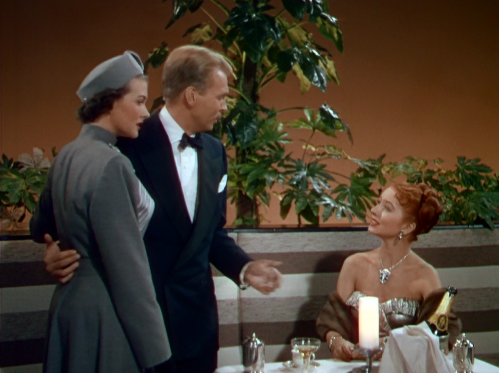 Trivia:
-Mel Torme’s song “Warm Hands, Cold Heart” was cut from the film. Torme does not have any songs in this film.

-Paula Raymond said in an interview that “Duchess of Idaho” was her favorite role, according to Screen Sirens Scream! by Paul Parla

-Lena Horne had a two more songs in the film, “You Won’t Forget Me” and “You Do Something to Me,” which were cut from the film. 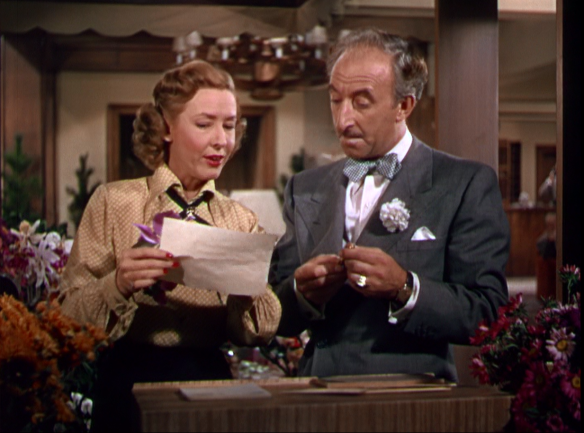 Mae Clarke in a very brief role as a flower lady. (Screen cap by Comet Over Hollywood) 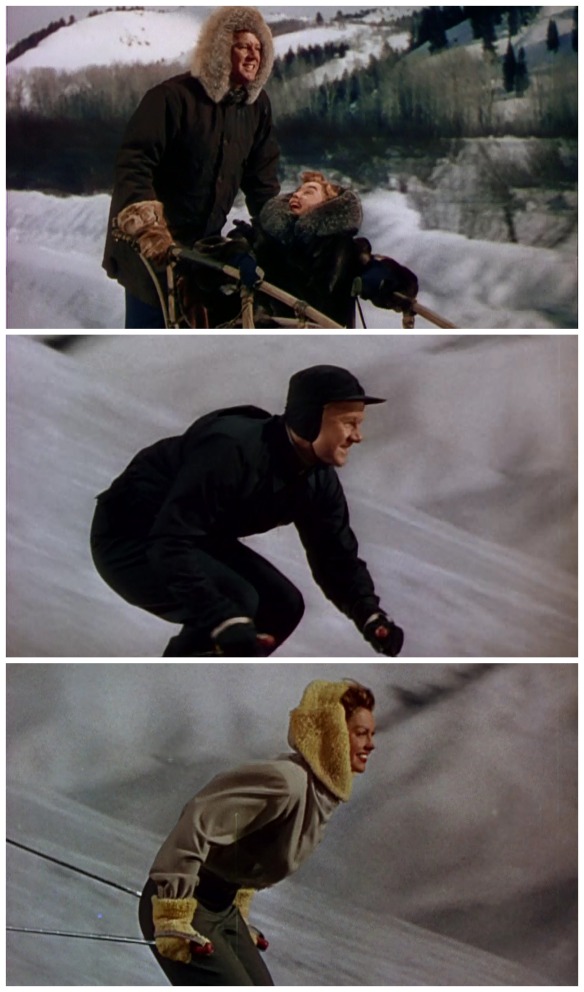 Van Johnson and Esther Williams fall in love while participating in winter sports. (Screen cap by Comet Over Hollywood)

Highlights:
-Unusual credits: The credits are sung, included the names of each actor in the film

My Review:
I vividly remember when I watched “Duchess of Idaho” for the first time.

I was 14 years old and about to start band camp (yes, I marched in the band. I played the clarinet) the summer before ninth grade. I was crying because one of my close friends, who also in band camp, had upset me. To calm me down, Mom decided we need to put on a cheerful musical, and she had recently taped “Duchess of Idaho” off Turner Classic Movies.

Immediately as the ridiculous, singing credits started playing, I began to dry my eyes and mostly forgot about how much my friend had upset me.

Ever since this first viewing in 2003, this has been my second favorite Esther Williams film- “Thrill of Romance” being my first.

“Duchess of Idaho” is one of the biggest pieces of fluff that you will ever watch. The plot is absurd: Paula Raymond allows her best friend Esther Williams to travel to Sun Valley to make Raymond’s boss/crush fall in love with Williams, simply so he’ll call Paula for help to get him out of another mess with a woman. And naturally, Williams ends with not only the boss in love with her, but band leader Van Johnson as well! 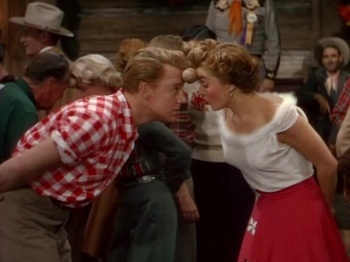 Despite the ridiculous plot, I adore this film.

The songs are catchy- I’m still upset that I can’t find an MP3 of “You Can’t Do Wrong Doing Right” performed by Van Johnson.

The Helen Rose designed costumes are beautiful and the Technicolor Sun Valley, Idaho scenery is gorgeous. Watching the stars ski, swim, dance and eat in Sun Valley makes you want to book a trip and travel via train (so you can sing “Choo Choo to Idaho”) to the ski destination.

There are also a few special treats in store: there’s a musical performance by Lena Horne, dressed in a beautiful green, tulle skirt and Amanda Blake in a small role. Best of all is the featured dance number by Eleanor Powell. Powell is dining at the ski resort when Van Johnson asks her to perform for the audience. She says no but is prodded into it. Though Powell didn’t plan on dancing for a crowd that night, she came prepared; tossing aside her long skirt which reveals a sequined leotard. Incidentally, it’s my dream to similarly have a leotard on under a dress, prepared to dance upon request.

But of course, all of these other treats are just the icing on the cake. In their fourth film together, Van Johnson and Esther Williams are always a delight to see together on screen. Williams’ swimming is worked into the plot as she performs at a nightclub. The film includes two elaborate swimming sequences and another casual swim at the Sun Valley resort. Paula Raymond and John Lund are also enjoyable to watch in the film.

“Duchess of Idaho” is no cinematic masterpiece. But if you need something to dry a few tears, try this musical on for size.