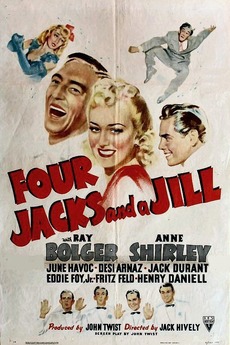 Plot:
Homeless Karanina “Nina” Novak (Shirley) is taken in by Nifty Sullivan (Bolger) and his four band-mates. Nina helps the band secure a job at a cafe with her singing and saying she is friends with a king she met in England. Taxi driver Steve Satro (Arnez) appears pretending to be the king, because they look similar, and breaks into the romance that’s forming between Nina and Nifty. 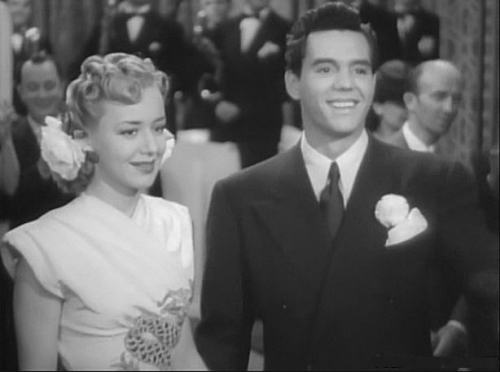 Ann Shirley and Dezi Arnez in “Four Jacks and a Jill.”

Ray Bolger listening to a symphony and stealing the tunes to adapt as swing music.

My review:
The title “Four Jacks and a Jill” sounds fun and promising. But unfortunately, the film doesn’t live up to the title, and all I can say is I’m glad this is only a little over an hour.
The main high point in the film are some interesting tap dance numbers by Ray Bolger and the jaunty tune “Boogie Woogie Conga,” but those two things alone can’t save this movie.
While I love Anne Shirley, especially in her 1930s films, “Four Jacks and a Jill” is simply annoying and thankfully brief.