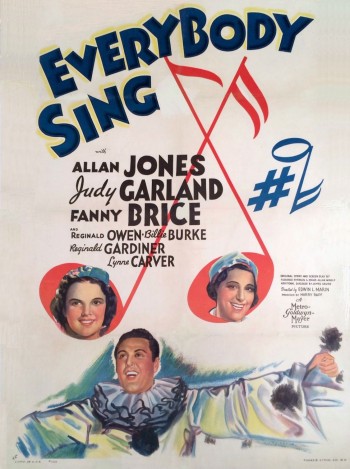 This week’s musical:
Everybody Sing

Plot:
Judy (Garland) is constantly getting in trouble and expelled from her private school. She’s expelled again when she starts singing swing in her music class. When she returns home, she finds her madcap family: her actress mother (Burke), playwright father (Gardner), mother’s protegee (Owen), Russian Maid (Brice), singing cook (Jones), and ambitious older sister (Carver). No one will listen to Judy when she tries to tell them she’s expelled, no one will listen to her and they are too wrapped up in their affairs to pay attention. When her parents try to send her abroad, she escapes and gets a starring role in a musical show.

Allan Jones, Billie Burke and Judy Garland in “Everybody Sings.”

–The St. Brendan’s Boy Choir did the singing for the girl students in the “Swing Mr. Mendelssohn” number.
-Judy Garland made her first personal appearance in her career while promoting this film. It was on Feb. 10, 1938, on the Loew State, according to Judy Garland: The Day-by-Day Chronicle of a Legend

by Scott Schechter.
-Judy Garland was announced to be in “Everybody Sing” in May 1937. The film was originally called “The Ugly Duckling” and then “Swing Fever,” according to Schechter.
-By the time Allan Jones starred in “Everybody Sing,” he starred in “Show Boat” with Irene Dunne and “Firefly” with Jeannette MacDonald. MGM was grooming him to be a top operetta star, but studio head Louis B. Mayer already favored singer, actor Nelson Eddy, according to Hollywood Songsters: Garland to O’Connor by James Robert Parish, Michael R. Pitts. “Everybody Sing” was Jones’ last MGM film before his contract expired and he left the studio.

Highlights:
-Reginald Owen doing a bit of singing
-Fanny Brice in her role of Baby Snooks. It’s annoying but notable because that is her key role.

My Review:
Judy Garland is revered today as one of America’s top performers.

From “Babes in Arms,” “Meet Me in St. Louis” or “Easter Parade,” Garland’s films and performances are stellar. But a couple of her early films, such as Pigskin Parade (1936) and this film, “Everybody Sing” (1938), are a struggle to get through.

“Everybody Sing” has entertaining music and a great cast, but it’s almost too much of a cast. Filled with Allan Jones, Judy Garland, Fanny Brice, Billie Burke, Lynn Carver, Reginald Owen, Reginald Gardiner to Monty Wooley, it’s bursting at the seams with actors. This isn’t usually an issue, but it is here because it’s a stardom vehicle for three of these stars: Allan Jones, Lynne Carver and Judy Garland. Jones has just as many songs as Garland. Lynne Carver has a few songs and you can tell MGM wanted her to be their new pretty starlet.

One notable thing about this film is the great vaudeville actress Fanny Brice’s role in the film.

While this film has great music, it’s exhausting. The madcap family shouts a great deal and the whining is tiresome. Throughout “Everybody Sings,” I felt like I sighed a great deal with irritation while watching it.

I find “Everybody Sing” excruciating to watch, but if you are a Judy Garland fan, I suggest watching it so you can see the full aspect of her career.