Plot:
Donna (Del Rio) is a diva of the stage and wants her lover Rico (Alvarado) as her leading man. To keep this from happening, the producers (Churchill, Cavanaugh) grab Roger Kerry (Marshall) off the street and say he has a contract. Donna and Roger butt heads, he’s replaced by Rico, and Donna’s play flops. While her fame flops, Roger rises as a huge radio star. The two eventually fall in love, and Roger wants both of them to leave their careers behind.

Trivia:
-This is the second and last film of the film’s leading man, Everett Marshall. Marshall was a Metropolitan Opera singer and preferred the stage.
-Originally titled “Romance in a Glass House, according to Buzz: The Life and Art of Busby Berkeley by Jeffrey Spivak 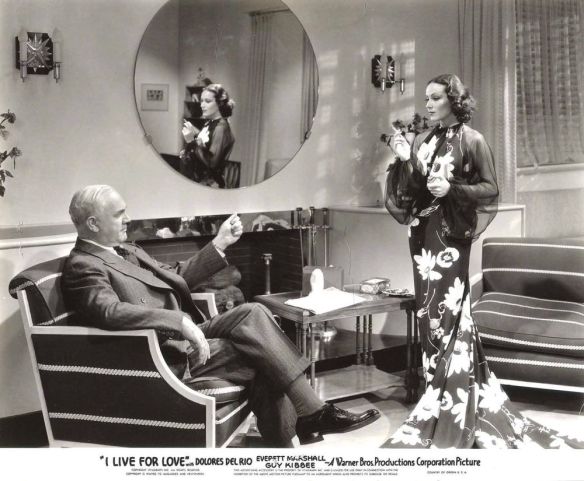 Benton Churchill and Dolores Del Rio in “I Live for Love.”

Highlights:
-Allen Jenkins dancing and singing to a ridiculous tune

My review:
“I Live for Love” is a fairly forgettable hour-long film.

Dolores Del Rio is always photographed beautifully and capable in her films, but t

Not familiar the name Everett Marshall? That’s not surprising. Marshall, a Metropolitan Opera and Broadway performer, was only in two films and this was his last film.

Though Marshall and Del Rio are the stars, character actors Allen Jenkins, Berton Churchill, Hobart Cavanaugh and Guy Kibbee are the real stars of the show. They carried the film and were the most memorable characters.

If you are a fan of Warner Brother’s fan or trying to see Busby Berkeley, I suggest seeing it. If not, don’t waste your time. 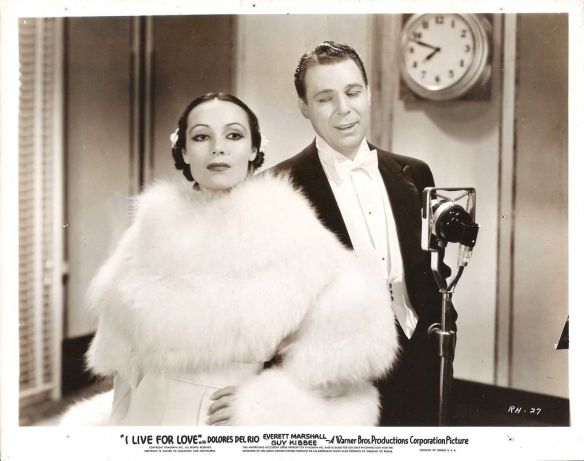 Dolores Del Rio and Everett Marshall in “I Live for Love.”