Plot:
Francis Elliott (Sothern) is a famous stage star and her teenage daughter Nancy (Powell) wants to follow in her footsteps. Along with wanting the same part in an exciting new play, mother and daughter both fall in love with the same man, Paul Berten (Sullivan).

Trivia:
-Remake of “It’s a Date” (1940) starring Deanna Durbin, Kay Francis and Walter Pidgeon
-In Jane Powell’s autobiography “The Girl Next Door and How She Grew

,” Powell said she loved Ann Sothern and that Sothern always had delicious snacks.
-A song called “Mention My Name In Sheboygan” performed by Jane Powell and Scotty Beckett was cut from the film
-Ann Sothern’s last film under contract to MGM.
-Joe Pasternak produced both “It’s a Date” and “Nancy Goes to Rio”
-Helen Rose did the costumes
-Based on a story by Fredrick Kohner, who wrote the popular book “Gidget.”
-Original titles were Ambassador to Brazil and His Excellency from Brazil.

My review:
You may remember that last week’s Musical Monday was the 1940 musical comedy “It’s a Date” starring Deanna Durbin. I thought it would be fun to pair it back-to-back with it’s Metro-Goldwyn-Mayer musical “Nancy Goes to Rio” (1950) starring Jane Powell.

It’s difficult to pick which of the two films I like better. They are both extremely similar but different enough to be their own films which are equally a lot of fun. 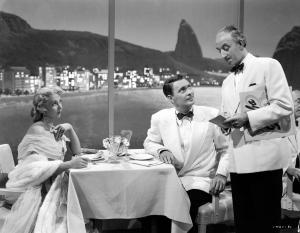 Ann Sothern and Barry Sullivan in “Nancy Goes to Rio”

In both films, the daughter gets a role that the mother wants. Needing some help with lines and wanting coaching, Nancy sails to Brazil to see her mother. While Paul Berten (Sullivan) overhears Nancy rehearsing, he thinks she’s pregnant because of the play.

“Nancy Goes to Rio” has the added bonus of Technicolor, Carmen Miranda tunes and the fashions of Helen Rose.

I also love Kay Francis and Ann Sothern, and they are entirely different actresses. It’s always wonderful to see Ann Sothern in a large, colorful MGM film since she wasn’t taken as seriously as some of her peers. However, this was Ann Sothern’s last film under contract at Metro-Goldwyn-Mayer.

The step down for me in “Nancy Goes to Rio” is the leading man of Barry Sullivan. Sullivan isn’t as handsome or as good of an actor as Walter Pidgeon.

The supporting cast in this film is also superb featuring Louis Calhern and Carmen Miranda, who are always delightful in everything they are in. At this point, Carmen Miranda’s film career is on the downswing. Miranda had already been dropped by 20th Century Fox and was picked up by MGM but her roles and songs weren’t the same caliber as they previously were. However, her roles are still as colorful and fun.

While I love “It’s a Date,” I also love “Nancy Goes to Rio.” “Nancy” has enough plot differences that it becomes its own film. Dive into this Technicolor extravaganza when you have a chance.