During his swimming career, Weissmuller set 28 world records, won 52 national championship gold medals, five Olympic gold medals and his 1927 world record for the 100 yard freestyle was unbeaten for 17 years, according to the Official Olympics website and the International Swimming Hall of Fame (ISHOF).

He was also the first Olympic swimmer to break a minute, according to the New York Times.

“Much of his success was due to his revolutionary high-riding stroke, flutter kick and head-turning breathing,” according to the Olympics. He also broke records with the backstroke and was famous for his chest high crawl stroke, according to the ISHOF.

While none of his records still stand today and swimmers Mark Spitz and Michael Phelps won more Olympic medals, some experts still consider Weissmuller the greatest swimmer of all-time “given the margin of superiority he had over his rivals.” 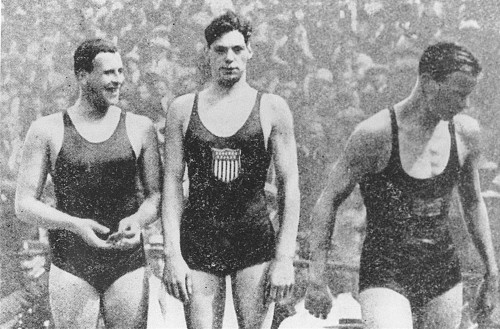 Johnny Weissmuller was nonetheless an accomplished swimmer. At the Paris 1924 Games, he won gold in the 100m freestyle, 400m freestyle and 4x200m freestyle relay. We see him here after his 400m freestyle surrounded by his fellow medal-winners, Sweden’s Arne Borg (2nd, on the right) and the Australia’s Andrew Charlton (3rd, on the left) Copyright: IOC

“He worried they would take away his medals, prohibit him from ever competing in the Olympics again, publicly disgrace him and possibly destroy his personal and professional lives,” Johnny Jr wrote. “…All of this he viewed secondary to what a scandal might do to (his) Grandmother Elizabeth. She had been so proud.”

Johnny took the secret to his grave and never told any of his wives.

At the Olympics, Johnny won four medals—three gold and one bronze:

At the 1924 Olympics with Duke Kahanamoku

In 1922, Weissmuller had already broken Duke Kahanamoku’s record, and beat him in the 100-meter freestyle at the Olympics. Along with the medals, France’s President Gaston Doumergue recognized Weissmuller for his “incomparable performance.”

After his success at the 1924 Olympics, his coach “Big Bill” Bachrach said it was time to forget the pomp and circumstance of 1924 and start training for 1928. At the 1928 Summer Olympics in Amsterdam, Weissmuller won two gold medals:

In 1929, Weissmuller retired from competitive swimming. He went pro, endorsing bathing suits for a company for $500 dollars a week (approx. $7,000 a week in 2016). It was during this time that Weissmuller was approached by Metro-Goldwyn-Mayer to perform the role he’s best remembered for today: Tarzan.

Johnny Weissmuller as Tarzan in “Tarzan, the Ape Man” (1932)

“Many think I turned pro to go into the movies, but that’s not true,” Weissmuller said in an interview. “…I was in Los Angeles and they asked me if I would like to screen test for Tarzan.  I told them ‘no thanks’ but they said I could go to the MGM lot and meet Greta Garbo and have lunch with Clark Gable.  Any kid would want to do that so I said ‘okay’.  I had to climb a tree and then run past the camera carrying a girl.  There were 150 actors trying for the part, so after lunch, I took off for Oregon on my next stop for the swim suit outfit. Somebody called me on the phone and said ‘Johnny, you got it.’  ‘Got what?’ ‘You’re Tarzan.’  ‘What happened to those other 150 guys?’  ‘They picked you.'”

Though Weissmuller starred in a brief role in the 1929 film “Glorifying the American Girl,” his big break came in 1932 with the film “Tarzan The Ape Man.”

Initially producers said his name would be too long for the marquee and that they would need to shorten it. According to Weissmuller, director W.S. Van Dyke intervened saying, “Don’t you ever read the papers? This guy is the world’s greatest swimmer.”  The producer told writers to “put a lot of swimming in the movie, because this guy can swim.”

Weissmuller starred in 12 Tarzan films. After the appeal wore off, Weissmuller continued in a similar role in the Jungle Jim series.

The Tarzan films are mainly filled with vine swinging, Tarzan’s signature yell, and Tarzan wrestling animals, but they are still highly entertaining.

Weissmuller with Maureen O’Sullivan in “Tarzan and His Mate” (1934)

“So you see why I owe everything to swimming,” Weissmuller said in an interview.  “It not only made my name, it saved my name.  Without swimming, I’d be a nobody.  Who ever heard of Jon Weis, marquee or no marquee.”

Weissmuller wasn’t the only actor to play Tarzan and compete in the Olympics. Check back this week and next week for more Olympic athletes who went to Hollywood.