This week’s musical:
“The Vagabond Lover 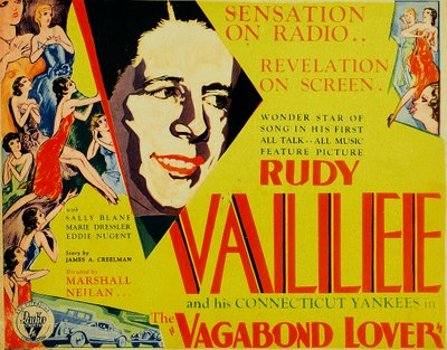 Plot:
Saxophone player Rudy Bronson (Vallee) forms a jazz band. To get off the ground, he and his band go to the home of famous bandleader Ted Grant (Waite) for an audition. Grant isn’t interested and kicks them out of his home and then heads out of town. Grant’s neighbors Jean Whitehall (Blane) and her aunt Ethel Bertha Whitehall (Dressler) mistaken Rudy and his band for Ted Grant. Rudy and his band play along but find themselves in hot water when they’re presented at a society fundraiser as Ted Grant and his band. 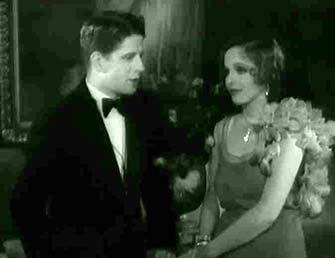 My review:
“The Vagabond Lover” is both an early film with sound and also Rudy Vallee’s film. It’s interesting to see this early film to see how both musicals and Rudy Vallee acting improved.

It’s very obvious that studios are still trying to figure out hot to best use sound. While the story line is less muddled than films like “Broadway Melody of 1929,” the sound volumes are often muddy. Sometimes the music is louder than the singing or talking, and other times I feel like the actors are shouting to be picked up by the microphone.

In his first film, Rudy Vallee isn’t a very good actor. But he apparently improved his acting craft over the years because Vallee was a skilled comedic actor in the 1940s and 1950s.

“Vagabond Lover” is just over an hour-long. It’s not terrible, but rather lackluster. Marie Dressler is wasted in the film and doesn’t exercise her comedic talents. Sally Blane is lovely, but is merely window dressing in the movie.

Overall, it’s watchable but not one I would be pressed to revisit.