Throughout the Halloween season, Comet Over Hollywood is spotlighting Halloween episodes of classic television shows.

“The Adventures of Ozzie and Harriet”— “Halloween Party”
Season 1, Episode 5

Plot:
The show begins with young Ricky dressed in his skeleton Halloween costume. His mother, Harriet Nelson, says it “gives her the willies.”

Ricky Nelson in his skeleton costume.

“My skeleton costume makes me look real thin and people feel sorry for you and give you more cake and ice cream,” Ricky said.

Ricky’s brother David comes home with a box of Halloween goodies and decorations. He’s the class treasurer and just bought everything for a school Halloween party.

During the conversation about Halloween parties, their dad, Ozzie Nelson, comments “Yeh Halloween is a lot of fun for kids” and continues to say that as you get older, you get tired of parties and games aren’t fun. He says, “It’s time to give Halloween back to the kids.”

Despite being down on parties, Ozzie goes next door to talk to his pal Thorny (Don DeFore), and they talk about how their parties aren’t fun, because the events are poorly planned. Thorny and Ozzie decide to plan a party using their “masculine efficiency.” They decide a party with an itinerary is the answer; planning down to when they will play games, dance and eat. Thorny and Ozzie also decide only a couple of “talented fellows” (them) should dress up in Halloween costumes rather than creating confusion with a bunch of “would-be comedians” in costumes. Thorny dresses like a Scotsman and Ozzie dresses like a devil. 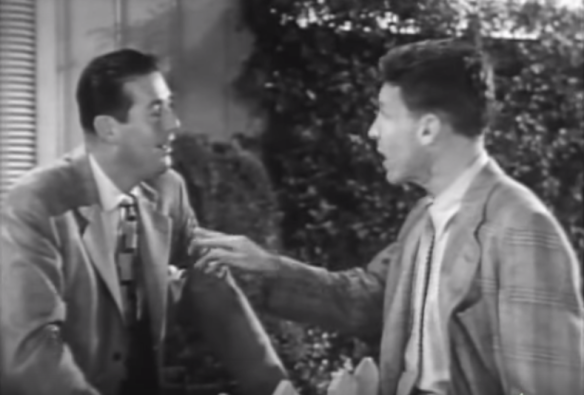 Ozzie and Thorny feel they have everything for the party scheduled down to a T. But then their wives point out one thing: the night of the party the men never set a location for the party. Knowing they had forgotten, the wives set a party venue on their own. The evening goes well until everyone discovers Thorny and Ozzie never planned for refreshments. 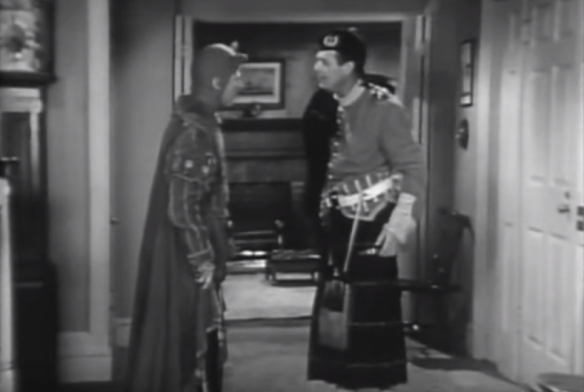 Ozzie and Thorny in their Halloween costumes.

Review:
While “The Adventures of Ozzie and Harriet” is often cited as the quintessential “perfect 1950s family” TV show, this is only the second episode I have ever seen.

This was a fun little episode, but I was disappointed that we didn’t see more of Ricky and David Nelson. Ricky and David are in the first five minutes of the 24 minute program and are not seen again. I wanted to see Ricky’s skeleton trick-or-treating antics and David’s school party. Since this is only one of two episodes I have watched, I’m not sure if it is typical for the shows to focus on Ozzie and Harriet and not their children. I think I was expecting it to be more child centered, like “Leave it to Beaver.”

Little Jerry Mathers on “The Adventures of Ozzie and Harriet”

Speaking of “Leave it to Beaver,” we see tiny four-year-old Jerry Mathers in his second film or TV appearance as a trick-or-treater. He is precious! This was probably the highlight of the show.

The show is fun and light-hearted, but if I had to pick another “perfect 1950s family,” I would go with “Leave it to Beaver,” “Father Knows Best” or “The Donna Reed Show.” While this Halloween episode was entertaining, I do feel the acting of Ozzie and Harriet is a little bland, and again, I wish the focus had been more on Ricky and David.

3 thoughts on “On the Small Screen: The Adventures of Ozzie and Harriet — Halloween Party”