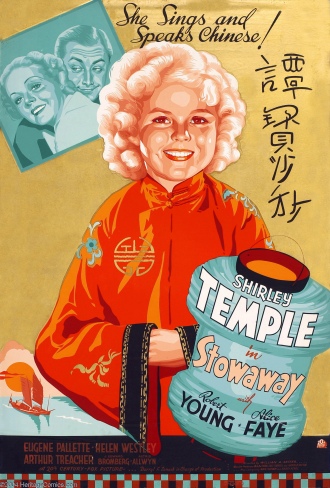 Plot:
Barbara (Temple), nicknamed Ching-Ching, is an orphan in China after her missionary parents were killed and now lives with other missionaries. When there’s danger in town, Ching-Ching’s friend, Sun Lo (Philip Ahn) puts her on a boat for Shanghai so she will be safe. Ching-Ching gets lost in Shanghai and is befriended by American Tommy Randall (Young). Ching-Ching accidentally ends up on a boat for the United States. On the ship, Tommy and Susan Parker (Faye) care for Barbara/Ching-Ching, but neither can adopt her because they aren’t married. The two get married to give Barbara a home.

Trivia:
-“Stowaway” was the big Christmas release of 1936. Released in December of 1936, a Christmas song and scene are tacked on to the end since it was released at Christmas.
-Shirley Temple was required to learn several Chinese phrases for the film. She was taught by a UCLA student from Shanghai, according to Temple’s autobiography “Child Star.”
-Production for the film was held up for four weeks after both Shirley Temple and Alice Faye had the flu, according to Shirley Temple’s book.
-Robert Young was borrowed from Metro-Goldwyn-Mayer for this film
-Third and final film for Shirley Temple and Alice Faye 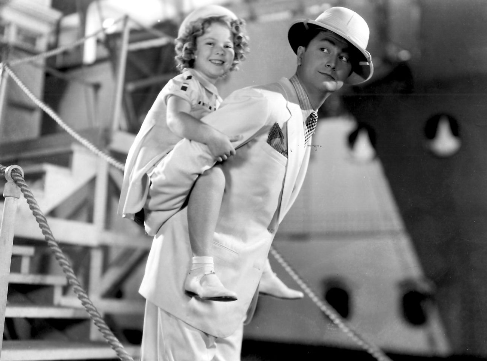 I apologize that the only YouTube version I could find is colorized:

My Review:
“Stowaway” (1936) is one of Shirley Temple’s better films as a child star. Her character of an orphan living with missionaries in China is adorable and witty. And even though Shirley ends up as a “Stowaway,” there isn’t any mad-cap confusion, like other films would probably throw in.

I also find it pretty impressive that Shirley Temple learned multiple Chinese words, phrases and proverbs and delivers them fairly convincingly. The adult leads of Robert Young and Alice Faye flank Shirley well and also compliment each other. Faye is already engaged to another man when she meets Young and her travel companion is his meddlesome mother-in-law, played by Helen Westley.

Her performance of “You Gotta S-M-I-L-E to Be H-A-Double-P-Y” is fun and energetic. During the song she does impressions of Al Jolson and Eddie Cantor which is a bit ridiculous, but fairly humorous.

We also hear Alice Faye’s deep melodic voice reprising “Goodnight, My Love” and later “One Never Knows, Does One?” According to Shirley Temple’s autobiography, Shirley was angry, knowing Faye had out-sung her in “Goodnight, My Love.” However, as a viewer, I feel that both performances give the song different meaning, almost as if it’s a separate song. Shirley’s is a sweet lullaby, nostalgic of what her mother used to sing to her. Faye’s is an uncertain romantic tune performed to the man she’s not engaged to. 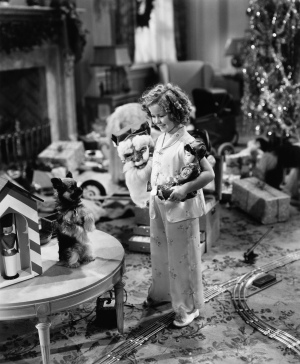 Shirley Temple in a publicity photo for the brief Christmas scene in “Stowaway.”

If you want a fun Shirley Temple film that has a hint of Christmas, this one is for you. This one may be one of my favorite Temple films, along with “Rebecca of Sunnybrook Farm” and “The Little Princess.”