Plot:
Business partners Skip Hutton (Oakie) and Freddy Austin (Wilde) own a struggling Canadian hotel and are on the brink of foreclosure. When a Norwegian millionaire Hjalmar Ostgaard ( Sakall) and his niece Nora (Henie) stay at the hotel, Uncle Hjalmar is conned into buying the hotel. Nora falls in love with Freddy, but she’s mad that he has to spend most of his time with pretty reporter Marion Daley (Reynolds) so that the hotel can get publicity. Nora also starts performing as an ice skater to earn more money. While Nora is chasing Freddy, singers for Woody Herman’s band Flossie and Brad (Landis, Romero) are having love problems of their own.

Trivia:
-Sonja Henie’s last film under contract with 20th Century Fox. She only made two more films after this, “It’s a Pleasure” (1945) and “The Countess of Monte Cristo” (1948)

Highlights:
-Sonja Henie skating numbers
-“Dancing in the Dawn” numbers where everything is dark except for Woody Herman’s band

My review:
“Wintertime” is an enjoyable enough film and has a wonderful cast, but the plot has some holes that left the film feeling incomplete when it ended.

Going into this film, I thought it was going to be a joyous and big band music-filled romp like “Sun Valley Serenade” (1941). Understandably, Sonja Henie film plots are fluff padded out with some fun jive music and beautiful ice skating scenes. And while “Wintertime” featured a good-looking leading man (Cornel Wilde), a well-known big band name (Woody Herman) and some great musical and ice skating numbers, the plot was still left me scratching my head.

New York Times critic Bosley Crowther describes it best in the opening of his Sept. 30, 1943 review:
“Time was when the Sonja Henie pictures were glittering and graceful delights, back in the good old days of “Thin Ice,” “Happy Landing” and “My Lucky Star.” But something has happened to them—or rather, has not happened—within the past few years, and an almost insufferable monotony of pattern and style has marked them. Latest in the succession, “Wintertime,” which came to the Roxy yesterday, not only lacks originality. It lacks humor, verve and color as well.” 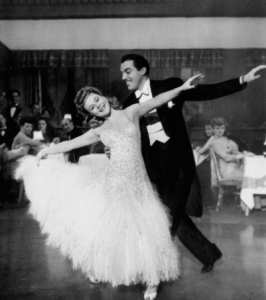 While Sonja Henie and Cornel Wilde are supposed to have a romance, the two are rarely together on-screen. Part of this is because of the jealousy conflict of Wilde escorting the pretty female reporter, played by Helene Reynolds. But Reynolds’ role feels a bit random and like it was thrown in last-minute. No one discussed her before and all of a sudden she is there, demanding Wilde’s attention.

Sonja Henie and Cesar Romero even perform a ballroom dancing performance together, which feels odd. “With all due respect, the little lady cuts a much fancier figure on skates,” Crowther wrote in his review. I’m inclined to agree.

To keep Henie and Romero from running off to get married, the last several minutes of the movie involve the “someone takes Romero’s clothes while he’s in the shower” gag, and he is running around the hotel in his long underwear. While in his underwear, Romero is avoiding Carole Landis and trying to get to a sled to run away with Sonja Henie, but doesn’t succeed.

And then after this lengthy gag, we cut to a finale ice skating number with Sonja Henie and the film ends. I was watching this film with my mother and we looked at each other and said, “But who did she end up with?”

They didn’t even end the film with the favorite conflict resolution method in musicals: Smiling at each other from the wings or audience during a performance. We don’t see Wilde again, who she previously told to go to blazes, and we assume Romero ends up with Landis.

Sonja Henie and Cornel Wilde in “Wintertime.” Your guess is as good as ours if they end up together.

It’s fine if Sonja Henie ends the film as an independent and single woman, but I don’t think that was the intention. She was so bound and determined to marry throughout the film that it all felt incomplete.

Overall the film had a great cast of actors and it was interesting to see clarinet player and band leader Woody Herman in a film. But I was expecting another “Sun Valley Serenade” and was disappointed.