It was Thursday, April 25, 2013, and I had just flown into Los Angeles from North Carolina for my first Turner Classic Movies Classic Film Festival. 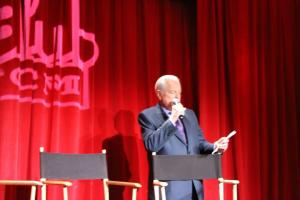 I was excited, tired and scared. It was my first solo plane trip, and I had unwisely flown into the festival the day it started, rather than the day before. I was momentarily homeless until my friend, Lindsay — who I was staying with — got out of class at UCLA. I stashed my suitcase in the hotel room of another friend, Jill, and went with her to the Roosevelt Hotel to get my film festival pass and for a press announcement.

I’m sitting at a small table, nervously saying hello to friends who I knew only from the internet before the film festival. And then film historian and Turner Classic Movies host Robert Osborne walks out on stage. Everyone else around me is calm and collected but I’m about to burst. I didn’t know if I should cry, laugh or faint. I had only been in Los Angeles for two hours and there was my hero standing 15 feet away from me! 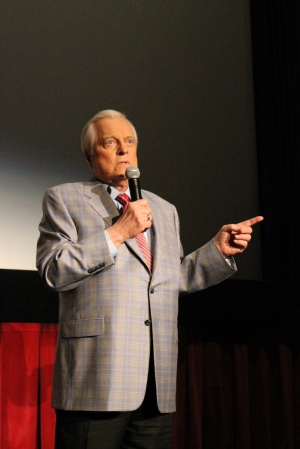 That Saturday during the festival, I was first in line for a rare screening of The Desert Song (1943), a Dennis Morgan and Irene Manning musical that isn’t often seen because of copyright issues. A volunteer confided that she heard Robert would be introducing the film. I excitedly sat in the front row so I could get a good picture.

Robert discussed the film and said that he had never seen The Desert Song and would be joining the audience to watch. While the Technicolor Warner Bros. film danced on the screen, I could barely focus; knowing Robert was somewhere behind me in the crowd.

After the film ended, I waited outside to see if I could get a picture and fulfil my dream of meeting Mr. Osborne. Another fan held Robert in conversation and it looked like I may not get my chance. When the fan left, I meekly approached him and asked for a photo.

“Yes, but we will have hurry because I have to meet Ann Blyth before Mildred Pierce,” he said.

I weakly said I was planning on seeing Mildred Pierce, too. But he still generously posed for a photo before darting a few blocks down Hollywood Boulevard to the Egyptian Theatre.

I retrieved my camera from the friendly volunteer who snapped the photo and, with my knees shaking, ran out of the Chinese Multiplex and called my mom squealing that I had met my favorite person. 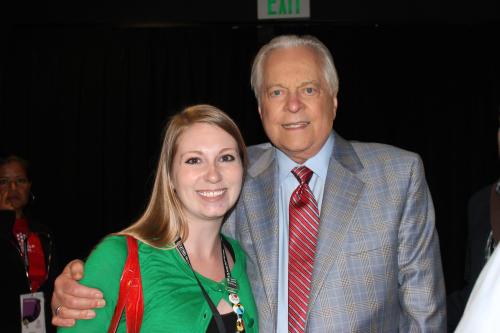 It’s a moment I will never forget.

It’s hard to say when I first really became aware of Robert Osborne. I actively started watching Turner Classic Movies in 2002 when I was 14, but I think his golden words filled with film knowledge really started to sink in when I was in high school — lounging on the couch over spring break and binge watching Metro-Goldwyn-Mayer musicals like Luxury Liner (1948), Three Daring Daughters (1948) and even dreadful Athena (1954).

Throughout high school and college, I would shush my family members if they started to talk during one of Robert Osborne’s Turner Classic Movies film introductions. Not only was he sharing his invaluable wisdom, but each introduction held so much warmth and friendliness. Robert Osborne felt like a friend or a favorite uncle coming into your living room. His introductions felt personal, like he was speaking just to you.

In February 2009, Robert Osborne was interviewed by one of TCM’s programmers. He discussed how he went to journalism school, traveled to Hollywood, became friends with Lucille Ball and how that catapulted his career of film history. Ball had never met anyone else so interested in classic films (nostalgia wasn’t en vogue) and told him to combine his journalism skills and film knowledge to write a book.

I was a sophomore in journalism school when I watched this and was inspired that he could combine his journalism career and film love to create something so great. On a much smaller scale than his success, Robert Osborne inspired me to create Comet Over Hollywood and, when I was at a daily newspaper, to write a weekly Sunday film column.

I spent many lonely New Year’s Eves with Robert Osborne, who would be dressed in a tuxedo and lifting his champagne glass to the TV camera. December 31st wasn’t so lonely when I had that.

Even non-classic movie fan friends know about my love for Robert. My senior year of college, I walked into Winthrop University’s student newspaper office on my birthday and the desktop background of my computer had been changed to a photo of Robert Osborne saying Happy Birthday. A few years later, another friend Photoshopped an image of me and Robert in the interview chairs for another birthday greeting.

And sadly, when Robert Osborne’s death was announced on March 6th, a handful of non-classic film friends sent messages of condolences — almost if Robert Osborne had been a family member.

But, he sort of was, wasn’t he? To the classic film community, Robert Osborne was a great uncle who told us fantastic stories and shared so much knowledge. Since he had been Turner Classic Movie’s host since its inception in 1994, its difficult to imagine him without it. 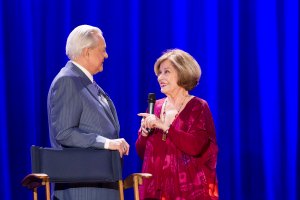 Diane Baker with Robert Osborne during the Ask Robert Event at The Montalban Theatre on Friday at the 2014 TCM Classic Film Festival In Hollywood, California. 4/11/14
PH: Mark Hill

I didn’t meet Robert again at the Turner Classic Movies film festival in 2014 — the last year he attended — but I attended a celebration of his 20 years at Turner Classic Movies. It was almost like a “This is Your Life” event with his family members from Oregon and actor friends like Eva Maria Saint, Robert Wagner, and Diane Baker. There was laughter, tears and a sparkling cider toast.

“You can’t say Robert Osborne without smiling,” Eva Maria Saint said during the tribute. And she was right, until today. Now I only have tears.

The closing film of the 2013 film festival was The General (1926) in the Grauman’s Chinese Theater shortly before it would be renovated into an IMAX theater and renamed TCL Chinese Theater.

Robert stood in front of the crowd and encouraged everyone to look around and soak in the theater’s architecture; to look at the ceiling and pay attention to the detail, because these historic buildings won’t always be with us.

Unfortunately, the same goes for our favorite people. Robert Osborne was the only person I ever felt star struck by. No one can replace him, but he couldn’t physically stay with us forever.

Of any death, this is the hardest to swallow. It almost feels like losing my grandparents all over again. We have so much to thank Robert Osborne for: the creation of a classic film network that brought classic film fans together and showing that classic films still have a purpose in today’s world. Robert taught the world that a film can’t be old if you have never seen it.

Thank you, Robert. Your legacy will always live in our hearts and minds. You will never know how much you meant to us. 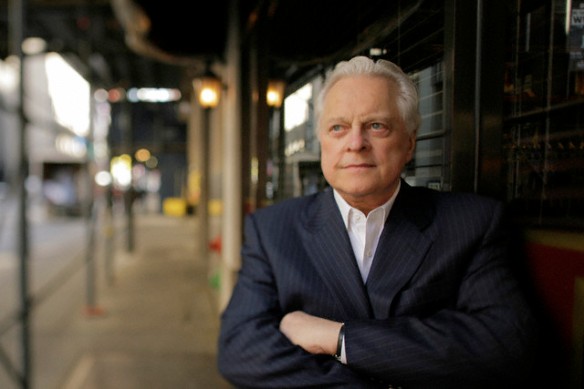 A few photos inspired by my love for Robert: 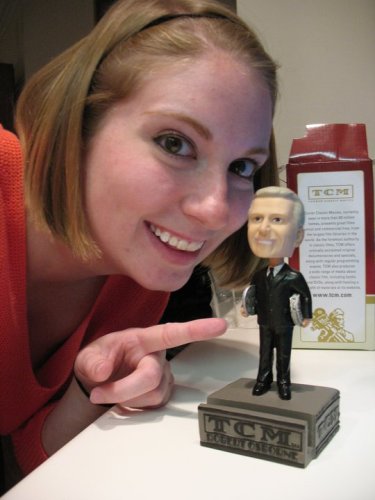 Birthday gift of the Robert Osborne bobble head in 2010. This bobble head still sits on my desk at work 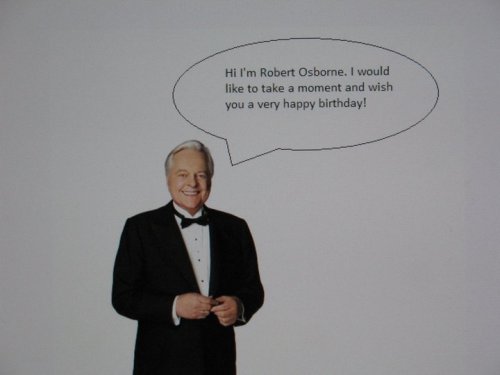 Birthday greeting in college in 2010 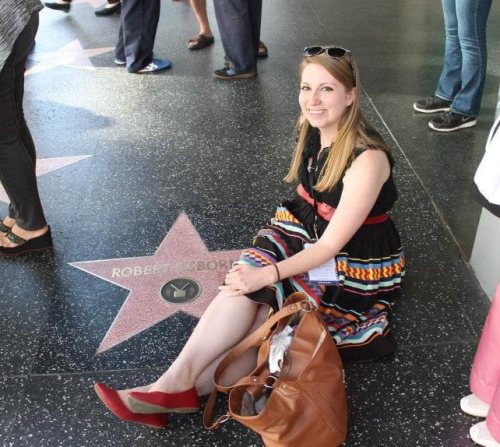 With Robert’s star on the Walk of Fame. Located in front of the Ricardo Montalban Theatre on Vine Street 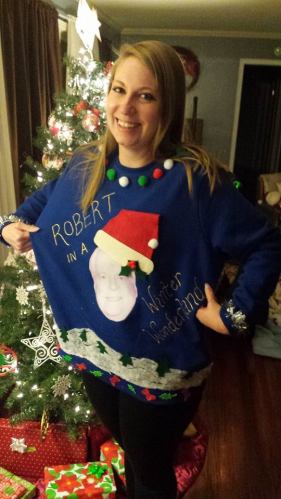 My Robert Osborne Christmas sweater in 2014.

9 thoughts on “Remembering Robert Osborne, a Friend to all Classic Film Fans”