Plot:
When the star of a Broadway show walks out after a tiff with the show’s choreographer Ted Sturgis (Champinon), the show publicizes that they are looking for a newcomer to “give a girl a break.” Three girls with varying talents: professional Broadway dancer Madelyn Corlane (Champion), sophisticated ballet dancer Joanna Moss (Sharp), and young, inexperienced tap dancer Suzie Doolittle (Reynolds).

Trivia:
-Musical numbers staged by Gower Champion and Stanley Donen, though Bob Fosse coregraphed his own dances.
-Gower and Marge Champion dancing together
-Gower Champion was dubbed by Bill Lee

Highlights:
-“Give a Girl a Break” montage of various women wanting to audition
-“The Balloon Dance” performed by

My review:
“Give a Girl a Break” isn’t a film often discussed today. It’s colorful and fun, has great dancing, but I think that’s largely forgotten when it comes to MGM’s catalog of 1950s Technicolor musicals.

Why is that? It’s directed by Stanley Donen, co-stars Debbie Reynolds (post-Singin’ in the Rain), has costumes by Helen Rose and dances choreographed by Bob Fosse and Gower Champion.

It’s probably because the film stars (then) husband and wife dancers, Marge Champion and Gower Champion as it’s leads. While Fosse and Reynolds are in the cast, they are very much secondary characters.

But don’t get me wrong, I love the Champions. I think they are likable on screen and are some of the best dancers to grace the silver screen. But for some reason they never caught on with fans. MGM signed the married dancers in 1951 for the film “Show Boat” with the hopes of making them the next Fred Astaire and Ginger Rogers. They only made three films with MGM and left the studio in 1955. “Give a Girl a Break” did poorly in the box office and lost MGM $1 million. After they left in 1955, they appeared on other TV shows but no more film roles to the significance that they had at MGM.

While they may not have been well liked by audiences, the Champions are some of my favorite dancers. In fact, I think Gower Champion is a better dancer and choreographer than Bob Fosse. There, I said it. I’m glad I got that off my chest.

There is even a dance that Champion and Fosse do together and I think Gower out dances him in the “Nothing is Impossible” number. Though I’ll admit that Bob Fosse’s “Balloon Dance” is of fun. I just don’t know why Gower is largely forgotten while Fosse is revered. Maybe it’s because Gower saw several flops in the 1970s while Fosse flourished with shows like Chicago and Pippin (which I star relevant today, I know). Or maybe people are enamored with the fact that Gwen Vernon and Fosse were married.

Anyways, I digress. I just would like to hear about Gower Champion occasionally, when great choreographers are discussed. 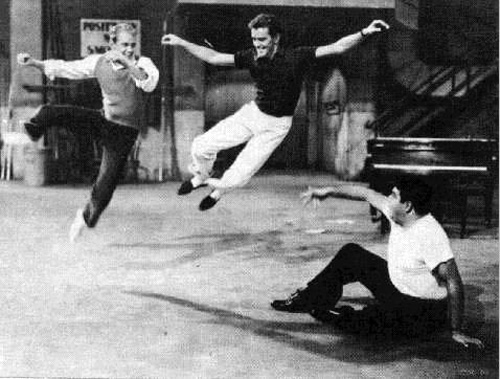 Bob Fosse, Gower Champion and Kurt Kasznar in “Give a Girl a Break”

One thing I like about this film is that it focuses on three women trying to get a role and we get to learn each girl’s story. That type of plot is more intriguing to me because, while Marge Champion is the most featured of the three, the “leading lady” is less defined. For me, it’s hard to decide which girl I would want to cheer for to be picked for the Broadway show, because each one has her traits that are interesting and could work.

Marge Champion, Dolly Sharp and Debbie Reynolds in “Give a Girl a Break.”

If you love colorful musicals, give this one a whirl. You may have never heard of it, but I think you will want to.