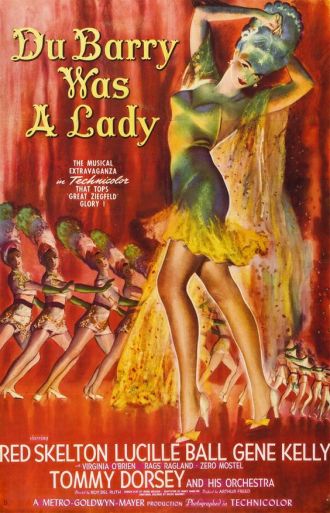 Plot:
All working at the same club, coat check boy Louis Blore (Skelton) and master of ceremonies Alec Howe (Kelly) are both in love with nightclub performer May Daly (Ball), where she sings a song as Madame DuBarry. May is in love with Alec, but she is holding out to marry a rich man. Louis wins $150,000 in a sweepstakes. Then he drinks a drugged drink and dreams that he’s King Louis XV and May is Madame DuBarry.

Lucille Ball and Red Skelton go back to the 1700s

Trivia:
-Lucille Ball’s first starring role under contract with MGM.
-Ann Sothern was originally set to star in this film but turned it down because she was pregnant with her daughter, Tisha.
-Zero Mostel’s first film
-Lucille Ball was dubbed by Martha Mears
-Produced by Arthur Freed
-Based on the 1939 Broadway musical starring Bert Lahr, Ethel Merman and Betty Grable. The film used very little of the original Cole Porter score.

My review:
“DuBarry Was a Lady” isn’t the best MGM musical around, and a lot of it is nonsense, but it sure is fun.

The film revolves around a nightclub hat check, played by Red Skelton, who is in love with the club’s singer, played by Lucille Ball. Ball’s character portrays ‘s Madame Du Barry in her act (hence the title). Lucille Ball is in love with fellow performer Gene Kelly, but she is unwilling to marry a poor man and end up happy but broke like her parents. Skelton strikes it rich but gets accidentally drugged, where he dreams everyone in the club is back in the days of France in the 1700s (include Tommy Dorsey and his band).

The time-traveling dream sequence may seem a little random, and it does take you out of the storyline, but it’s fairly entertaining.

For some reason, this 1943 Technicolor musical seems to explode color than any other 1940s MGM musical. Maybe it’s because of the costume color selections that were picked. We start with a musical number of chorus girls in Ziegfeld Girl-like blue and purple costumes. Then there is Lucille Ball with her vibrant red hair (a color MGM stylist Sydney Guilaroff called Tango Red). Of course, Red Skelton also has a shock of red hair. And then there’s Virginia O’Brien’s unforgettable chartreuse blouse. Visually, this film is off-the-charts gorgeous! 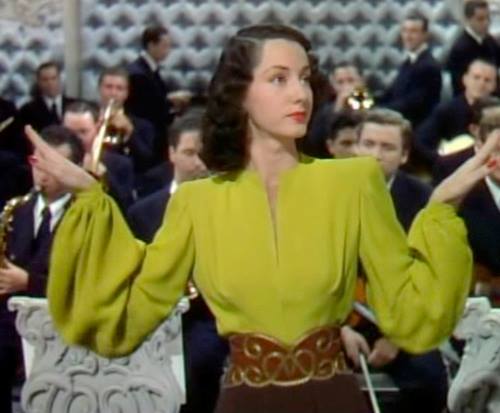 Virginia O’Brien with this chartreuse blouse

Colorful costumes for the opening number

Red Skelton is the star of this film and has the most screen time. While Lucille Ball and Gene Kelly may be the reason some folks tune into this one, Kelly is really secondary to Ball and Skelton. Kelly only has one full-on dance number. According to her autobiography “Love, Lucy,” Lucille Ball enjoyed working with Red Skelton. Lana Turner even has a cameo in the film!

Zero Mostel also randomly shows up in this film and does some moderately annoying impressions. For example, he does one of Charles Boyer in “Algiers” (1938) and just repeats “Heddyyyy” about 15 times. And then there is Virginia O’Brien, who sings in her straight-faced singing style, that is somehow so appealing.

“Du Barry was a Lady” has its faults and is silly. But I won’t deny that I love it. Hopefully, you will too.