Contemporary classic film fans have the luxury of watching older films in many different forms. Stream on Netflix, buy it on BluRay or DVD, watch it on their phone on YouTube, or turn the television to Turner Classic Movies at any point in the day.

But despite all of these options and opportunities, sometimes film lovers want to see the film the way it was meant to be shown—on the big screen. But the real treat is if the movie is projected on film, but not just any film—rare nitrate film.

Up close look of Ingrid Bergman on nitrate film in a 1945 Red Cross promotional film. Pass holders had the opportunity to photograph and touch this film. (Photo: Comet Over Hollywood)

What makes this unique is the rarity of nitrate film. Why is it rare? Nitrate, which was the earliest mass-produced celluloid format, was only used for motion pictures from 1895 to 1948. It was discontinued because nitrate is highly flammable. And those films left existing on nitrate either were not properly preserved or were destroyed (either intentionally for safety or because they caught on fire).

As many of you may know, I generally attend the Turner Classic Movies Classic Film Festival (TCMFF) in Los Angeles, but was unable to make it there for a fifth year due to a scheduling conflict. To ensure that I got my film festival fix for 2017, I decided to try the Nitrate Picture Show.

Prior to this film festival, I don’t think I had ever watched a film on nitrate. But now, I have seen nine feature films and seven shorts all on nitrate film. The films for the Nitrate Picture Show aren’t released until the Friday that the festival starts, giving you what they called a “blind date” with these films. The festival concludes with a true blind date film—you don’t know what you are watching until it starts. 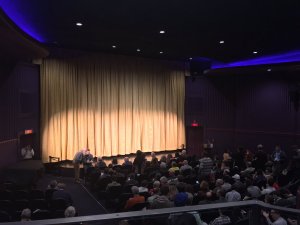 Inside the Dryden Theater before Alexander Nevsky (1938). (Photo: Comet Over Hollywood/Brandon B.)

The Nitrate Picture Show is quite different from what I’m used to. All of the films are in one theatre—the Dryden Theatre connected to the Eastman Museum—rather than in several different venues, like at other festivals  I have attended.

Another difference was the audience. This audience seemed more academic than the avid classic film fan you may meet in line at the TCMFF. I marveled at their passion to preserve film, but, on the other hand, was shocked when I heard butchering of José Iturbi’s name (and questioning who he was) after an Anchors Aweigh screening.

Gene Tierney and Richard Widmark in “Night and the City”

I was also discouraged and annoyed by laughter (that I interpreted as derisive) throughout non-comedic films. A good example would be the dark, gritty noir “Night and the City” (1950). In one scene, Gene Tierney is telling her scheming partner, Richard Widmark, that he’s killing himself and killing her. Widmark is digging through her belongings to find money to pay off someone who wants him dead. While Tierney collapses on the floor sobbing, Widmark takes the money he needs and throws the rest on the floor. And the audience laughed? I actually don’t think there are any funny scenes in “Night and the City.” It’s a dark, uncomfortable, rather tragic movie.

My interpretation was of the laughter “I’m too smart for this movie” which was off-putting.

There was also laughter throughout Alfred Hitchcock’s “Spellbound” (1945) — Hitchcock adds humor in many of his films but the laughter wasn’t just during the humorous scenes. While it is definitely not Hitchcock’s best (too much romance and not enough action, for me), but it seems a little pretentious to laugh at the work of someone considered the best director of all time.

Laughter aside, it was amazing to see films like MGM’s Technicolor “Anchors Aweigh,” “Bachelor and the Bobby-Soxer” and Hitchcock’s “Spellbound” on nitrate. Nitrate is known for its clarity of images and beauty.

I also watched several foreign films I probably wouldn’t have gone out of my way to see on my own, such as Levoton very (1946) or Le sang des bêtes (1949).

Oddly enough, while the films were introduced, little historical context or trivia was shared in the introductions. This is unusual, even for local screenings I have attended. For example, we were told the BFI print of “Night and the City” had 15 extra minutes than the U.S. print, but the audience was told, “but I couldn’t tell you where those 15 minutes are in the film.” Isn’t that something you should know if you are introducing a film at a festival?

Along with seeing the movies, pass holders were able to tour the George Eastman Museum and touch strips of nitrate film (while wearing gloves) to examine the thickness of the material.

Looking at a strip of Nitrate Film with a 1945 Red Cross promotional film with Ingrid Bergman.

Now, while watching films at home, I sit and wonder “I wonder how this would look on nitrate?” This festival sparked my interest to see more films in this rare format.

The films I saw during throughout the festival included:

7 thoughts on “Nitrate is Hot: First time at the Nitrate Picture Show”