I was excited to find a new-to-me classic Christmas film (which I have previously palmentioned can be hard to find). 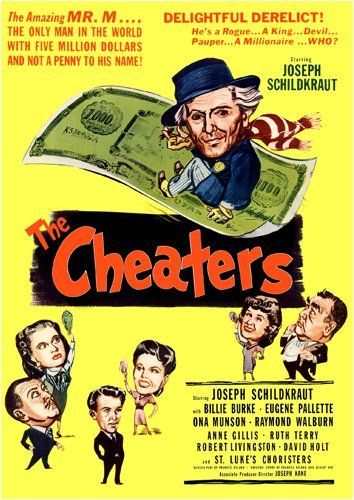 “The Cheaters” (1945) most likely won’t be added to my mandatory list of Christmas season viewing, but it’s a fairly enjoyable film.

Wealthy James C. Pidgeon (Eugene Pallette) is about to go bankrupt while his wife Clara (Billie Burke), children (Ann Gillis, Ruth Terry, David Holt), and brother-in-law (Raymond Walburn) are all still happily living off what little money he has left.

For their charity case, the family selects Anthony Marchaund (Joseph Schildkraut), a has-been actor who was injured in a car wreck at the height of his career. He now drinks too much and walks with a limp.

To help solve the financial problems, the family is counting on an inheritance from the $5 million estate of their dead Uncle Henry. However, the uncle only leaves the family $1, saying they would squander it. Uncle Henry leaves it to an actress who he saw play Little Eva in the play “Uncle Tom’s Cabin” in 1913.

However, Uncle Henry doesn’t know where the girl lives, and if she can’t be found in a week, the money will go to the family.

The Pidgeons decide to search for the girl, Florie Watson (Ona Munson), to keep her from finding out from the inheritance. When they locate her, they lead her to believe that she is their relative and invite her to their Christmas celebration in a remote area, so she won’t be able to read the news. However, celebrating Christmas in a house built in 1771, causes the family to reminisce on tradition.

All the while, the charity case actor, Mr. Marchaund, figures out what the family is up to and causes them to face the (perhaps ugly) truth about themselves.

One source called “The Cheaters” (1945) “an unofficial reworking of My Man Godfrey,” and another compared it to Dickens’ “A Christmas Carol.” And I have to disagree with both. There are similarities to “My Man Godfrey” with Eugene Pallette starring and the “charity case” coming to live with the Pidgeons for Christmas. But he is no hobo-turned-butler like Godfrey. As for “A Christmas Carol,” Joseph Schildkraut gives a monologue at the end, comparing the family’s Christmas to the revelation Scrooge has about his wrongdoing.

Joseph Schildkraut and Ona Munson in The Cheaters (1945)

While “The Cheaters” is relatively entertaining, it feels like the writers tried to do too much in 87 minutes. When the movie begins, you think this will be about rich people going bankrupt. Then Joseph Schildkraut’s “charity case for Christmas” is mentioned, so you think this will be about the adventure of him staying with the family for the holidays. But the audience is tossed another plotline of down-on-her-luck Ona Munson about to inherit $5 million. In fact, when the son (played by David Holt) comes in announcing about their uncle dying and no money, I thought, “Wait, did I miss something?” because the plotline is so out of the blue.

It just feels like too much. The studio should have gone with either the Schildkraut plotline or Munson, not both.

This film was originally considered to be a vehicle for actor John Barrymore, according to the National Board of Review of Motion Pictures. Barrymore died in 1942, and instead Joseph Schildkraut was cast as the lead, who will remind you a bit of John Barrymore here (in my opinion at least).

I felt like Ona Munson was the best part of the film. Munson gave a warm performance that drew me to her character. 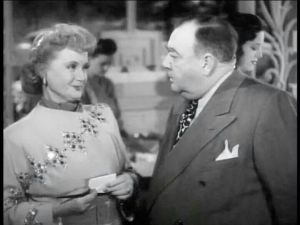 Billie Burke and Eugene Pallette in The Cheaters

Of course, Eugene Pallette was another highlight in the film, playing his usual, gravel-voiced father figure. I thought it was interesting because I rarely see Pallette as the main character — usually, he is in the supporting cast — and he was one of the leads. “The Cheaters” was Pallette’s third to last film. Billie Burke also played her standard dizzy character.

As for the rest of the cast, Ruth Terry, Ann Gillis and David Holt all came across as whiny. I know that was how their characters were written, but it just seemed so shrill the whole time. I’m not familiar with David Holt and his work, but he was a terrible actor in this movie.

Though the whole film takes place during Christmas, Republic released this movie on July 15, 1945. The New York Times’ July 21, 1945, review was not complimentary, saying it was aptly named as it cheated the audience:

“Republic wasn’t kidding when it titled the vapid little film which it delivered yesterday to the Gotham “The Cheaters.” It’s a swindle, all right… the whole thing is trashy—just a compound of witless platitudes. And several good actors are wasted in it. Remember: the title is the tip.”

I wouldn’t be quite as harsh as the New York Times’ review, as I didn’t find it trashy or witless. “The Cheaters” is an entertaining little film, and I think it’s worth watching, especially if you love Christmas movies. I just don’t think it will take the place of “The Bishop’s Wife” or “Remember the Night” in my line up.