Basil Rathbone as Scrooge and Johnny Desmond as nephew Fred

Plot:
A musical retelling of Charles Dickens’ novel, “A Christmas Carol.” Miserly Ebenezer Scrooge (Rathbone) is warned by the ghost of his friend Marley (Weede) that he needs to change his ways or he will end up chained to his sins. On Christmas Eve night, Scrooge is visited by ghosts to show him his past, present and future life to convince him to change.

Trivia:
-The show was originally lost for several years. It was found at the home of a retired Alcoa executive’s home.

-Originally filmed in color, but only the black and white version exists.

-Broadcast live on December 23, 1956, on the NBC anthology series The Alcoa Hour.

-Remade in 1978 as an animated TV cartoon special with voice work by Walter Matthau, Tom Bosley and Theodore Bikel.

My review:
Over the past few years I have watched a few various musical “Christmas Carol” adaptations, including the feature film “Scrooge” (1970) starring Albert Finney and the musical TV play “A Christmas Carol” starring Fredric March, presented by Shower of Stars.

When I went into this, I fully expected it to be similar to the Fredric March “Christmas Carol”: simple songs, truncated story and only lasting an hour. I was completely wrong! “The Stingiest Man in Town” is 81 minutes long and is performed almost like a Broadway production. It’s also impressively filmed and broadcast live!

Basil Rathbone is a good Ebenezer Scrooge. He sorta sing/talks his songs, rather than fully singing them. I was surprised to see Vic Damone as young Scrooge, who of course sang beautifully.

“The Stingiest Man in Town” includes 13 songs and interpretive dances. Parts of the story aren’t told in the traditional manner and interpreted through songs. For example, young Scrooge becomes more involved in his money and his romance with Belle (Patrice Munsel) breaking apart. This is exhibited by a wall of (literal) gold building between the two, as they sing about what might have been on either side of the wall. 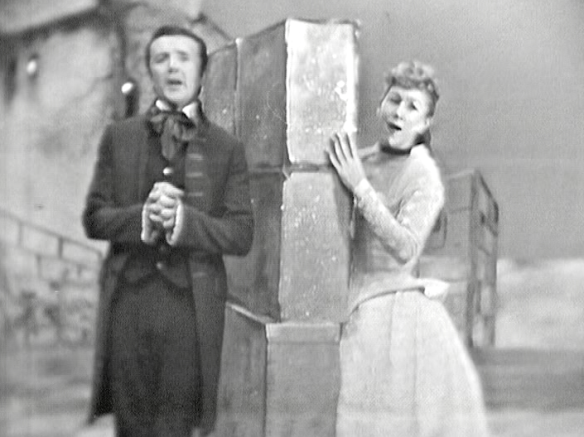 Another example is that we don’t really see the Ghost of Christmas Future. Ghost dancers perform around Basil Rathbone.

“The Stingiest Man Alive” is fairly entertaining. It also is pretty special that we are able to see this TV movie again since it was lost for so many years. My only complaint is that it seems rather long at 81 minutes. If you’re able to catch this one, it’s definitely interesting to see another classic actor performing the role of Ebenezer Scrooge!