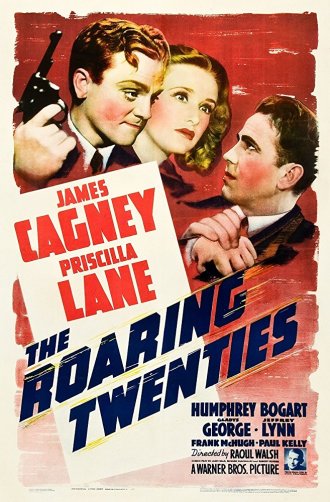 Plot:
During World War I, three men meet in a foxhole and become friends: Eddie Bartlett (Cagney) who wants to go back to his pre-war job as a mechanic, George Hally (Bogart) who is a bit brash and wants to run a saloon, and Lloyd Hart (Lynn) who is college educated and wants to be a lawyer. When the war ends, Eddie returns home and can’t find work. Prohibition begins and Eddie gets mixed up with bootleggers. He also meets and falls in love with Jean (Lane), who doesn’t reciprocate his feelings, and gets Jean a job singing in a club owned by Panama Smith (George). The years go by and Eddie and George work together as bootleggers and Jean grows closer to Llyod. 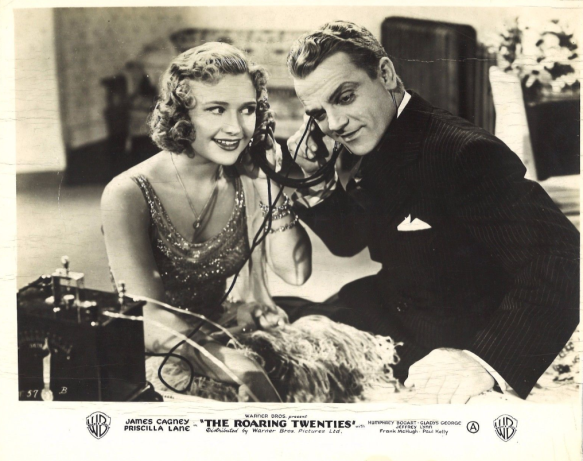 Priscilla Lane and James Cagney in “The Roaring Twenties”

Other trivia:
• Gladys George’s character of Panama Smith is based on Texas Guinan. The role originally was cast to Glenda Farrell. It then was offered to Lee Patrick and Ann Sheridan before George got the role.
• Raoul Walsh replaced Anatole Litvak as a director
• A 1920s nostalgia craze followed this film, including popular 1920s songs recorded again and magazine publishing 1920s photospreads, according to James Cagney Films of the 1930s by James L. Neibaur.
• Working title was “The World Moves On”
• Writer Mark Hellinger based the film off of what he witnessed as a newspaper reporter in the 1920s. He based the characters on real-life gangsters Larry Fay, Moe Snyder and Hymie Weiss.

My review: Searching for the “1939 feature”:
James Cagney is a versatile actor: he could play bad guys, comedy roles and he could sing and dance. But when it comes to 1930s films, his roles as gangsters sneering “You dirty rat” readily come to mind.

“The Roaring Twenties” was one of his last gangster roles, and his last role of the 1930s, but it’s different from his characters in films like “Public Enemy.” In this film, Cagney returns from war wanting to live a simple life and falls into a career of bootlegging. It’s not what he necessarily wanted, but he ends up being successful at it. But the character has more depth than the usual bad guy gangster who just wants money. We see him pining for Priscilla Lane, knowing deep down that she isn’t his.

Humphrey Bogart’s character is really the antagonist of this film. Bogart started in films in 1928, with his first standout role coming in 1936 as Duke Mantee in “The Petrified Forest.” However, I feel like he was stalled from 1936 to 1939, but in 1939 he started to progress again into larger roles and he was a bonified star by 1940.

Jeffrey Lynn plays his usual handsome nice guy and I won’t deny that I love him. Lynn and Priscilla Lane make a great pair, and Warner Brothers agreed since this is one of four films Lynn and Lane co-starred together in 1939 alone! My only beef is that I could have used more Lynn/Lane romance! 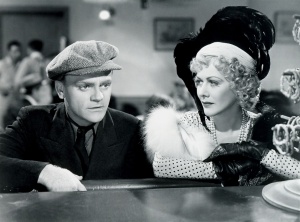 James Cagney and Gladys George in “The Roaring Twenties”

And in the background of our glittering stars is Gladys George as Panama Smith, a character modeled after Texas Guinan. She loves Cagney’s character from afar and suffers for it. George plays the role beautifully and heartbreakingly.

What I think is interesting about “Roaring Twenties” is that it’s not your usual crime film. It is almost filmed like a documentary where there is narration and it jumps forward a few years to progress us through “the roaring twenties.” The film begins during World War I and follows the three soldiers through the end of the war, returning home, prohibition beginning, organized bootlegging and the crime accompanying it, the introduction of Tommy guns, and then finally the end of prohibition.

The 1930s are often categorized with gangster films and I feel like “Roaring Twenties” caps off the decade well. It nicely packages up the history of bootleg whiskey and organized crime into a gift that gives more heart to the story than just Tommy guns and criminals with molls.

2 thoughts on “Watching 1939: The Roaring Twenties”