Each year when I return from the Turner Classic Movies Classic Film Festival (TCMFF), I have a hard time articulating the experience.

“How was your trip? Who did you see?”, friends and coworkers ask.

I practically stutter like Porky Pig as films I watched and classic stars I clapped for swirl in my head like a kaleidoscope, thinking “Where do I begin?” The same thing happens when I try to put into words here about this extraordinary festival. So many exciting things happen over the span of three and a half days that it can be difficult to put your arms around it to begin to describe it: Tearing up as 100-year-old Marsha Hunt was interviewed by Eddie Muller, standing inches away from former child star Claude Jarman, Jr. as I interviewed him on the red carpet, excitedly hugging and catching up with friends I only see once a year at the festival.

The 2018 TCMFF festival was my fifth time attending. The festival began in 2010, and my first year was in 2013. I have attended every year since, except I, unfortunately, was unable to attend the 2017 festival due to other obligations. 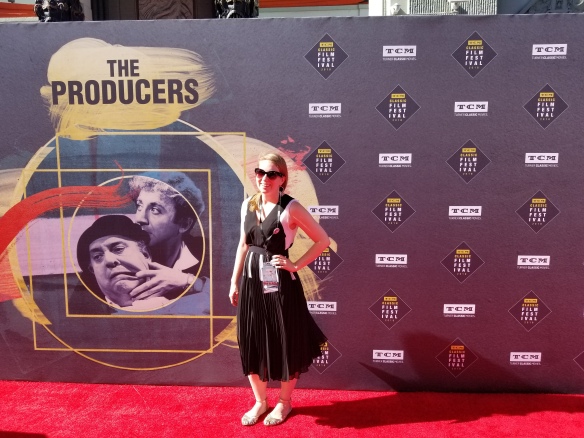 TCMFF 2018 was full of firsts for me. It was my first year covering the red carpet arrivals (a separate post to come on this), my first time seeing a movie at the Cinerama Dome, and the first time my boyfriend, Brandon, attended the festival (and his first time in California). I even skipped all midnight screenings so I could sleep, something I generally don’t do. I also had the opportunity to visit the American Society of Cinematographers clubhouse with TCM Backlots, which was an amazing experience.

Broken down by decade, this year I saw:

1930s:
A Star is Born (1937) starring Janet Gaynor and Fredric March. This film was screened on nitrate (!) at the Egyptian Theatre. It had been several years since I saw it so it was lovely to revisit it. The print was so vibrant and gorgeous and I sobbed at the end of the film. TCM host Alicia Malone interviewed director William Wellman’s son, William Wellman Jr., before the film. Wellman Jr. said of the 80 films his father made, “A Star is Born” was his favorite.

1940s:
This Thing Called Love (1940) starring Rosalind Russell and Melvyn Douglas. I have seen almost all of Rosalind Russell’s films, but “This Thing Called Love” was a new-to-me watch. It was a romantic comedy revolving around Russell’s character believing that her marriage will only succeed if she and her husband live in name only (no consummated marriage) and make sure they can live together. Douglas’s granddaughter, actress Illena Douglas, introduced the film. I really enjoyed this film and it was fun to watch with a laughing audience. Added bonus: It was on 35mm

None Shall Escape (1944) starring Marsha Hunt, Alexander Knox, Henry Travers. This is the film I most looked forward to and I had been dying to see it ever since it was announced. I have never seen (or heard of) this film and it was a rare screening. And to make it even more special, 100-year-old actress Marsha Hunt was going to be interviewed beforehand! I skipped a film block just so I could be in line to see Miss Hunt (I was number 10 in line), and that was the best decision I made during the festival. Miss Hunt was touched by the excited response of the audience and was lovely in her interview. As for the film, it was like no other film I have ever seen from the genre. It focuses on trials after World War II ends, but since the war was not over, the film assumes that Germany loses. It is a shocking and brutal story that is very unique for 1944 and is more similar to films made in the 1950s or 1960s.

1960s:
The World Of Suzie Wong (1960) starring Nancy Kwan and William Holden. I had seen “The World of Suzie Wong” before but it had been several years. While it was recently shown on TCM, I knew I had to attend this screening to see the marvelous Nancy Kwan. Historian Donald Bogle interviewed Kwan before the film. Kwan shared how she got the role, which was her first film role, and how Holden and director Richard Quine guided her, and about how she felt about Asian representation today. I’m glad I was also able to revisit this film, because it is a lovely story. And I cried at the end.

Grand Prix (1966) starring James Garner, Yves Montand, Eva Marie Saint, Toshirô Mifune, Jessica Walter, Brian Bedford, Antonio Sabato. Filmed in Panavision and screened at the Cinerama Dome on Sunset Boulevard, this movie is not one I generally would have gone out of my way to see. But I’m glad I did. I never had been to the Dome before and it was fantastic to see a movie in Panavision! Grand Prix was a new-to-me film and I’m glad my first watch was in Panavision, the way it was meant to be watched, rather than on a TV. John Frankenheimer directed the film to be shot in a certain way with grid-like visuals, and that wouldn’t have come across as well. My only complaint was that I didn’t love the romance between Saint and Montand. Eva Marie Saint was interviewed by Leonard Maltin at the end of the film, where she shared that she didn’t like the film. (Let’s be real: The real MVP of Grand Prix was Jessica Walter’s perfect hair).

Everyone at Grand Prix received a program, like they would have during the original run of the film.

Point Blank (1967) starring Lee Marvin and Angie Dickinson. I had seen “Point Blank” before and it was not my original plan to see the movie. However, the first time I watched it was on a small TV and I was hoping seeing it on the big screen would help me have a more decisive decision about the storyline: Did it happen or was it all a dream/hallucination? This was also a very cool screening, as it was shown on 35mm. It wasn’t a perfect print and the imperfections of the film gave an extra grittiness to the film.

Since it was my boyfriend’s first time at the festival, I asked him to share his thoughts on the festival as well. In addition to the festival, Brandon Brown was also filming for his Bernard Herrmann documentary in Hollywood:

I enjoyed how the festival offered films in multiple formats, from 35mm to nitrate to DCP. I caught the screening of POINT BLANK during the festival, and seeing the film on 35mm was a real treat. I’ve seen the film many times; however, seeing it projected with an audience of film lovers truly added to the experience.

Brandon and I at “A Star is Born”

The demonstrations offered during the festival were excellent, as well. In particular, I loved being able to visit the American Society of Cinematographers’ clubhouse. It was a unique opportunity to learn about the history of cinematography from working cinematographers. The clubhouse was like a mini-museum and it’s not every day that you have the chance to stand inches away from the camera that was used to shoot CITIZEN KANE.

The location for the TCMFF is perfect and I’m not sure if it’d work as well in any other city in the US. Hollywood is rich with historical theaters and venues. I enjoyed meeting the people who I connected with on social media over the years

Being able to screen a nitrate print of A STAR IS BORN (1937) in The Egyptian, for instance, was outstanding. Most of all, the TCMFF offers film lovers a chance to see introductions and talks by some of their favorite stars, filmmakers and critics. Seeing Marsha Hunt and Eddie Muller speak before the brilliant (but brutal) film NONE SHALL ESCAPE was a moving experience that I’ll never forget. John Carpenter’s introduction to SCARFACE (1932) also provided useful insight on the film and suggested deeper meanings behind its rich cinematography.

Inside the American Society of Cinematographers clubhouse in Hollywood. (Photo: Jessica P.)

I did see fewer films this year, but it largely was to make sure I didn’t miss once in a lifetime experiences, such as touring the American Society of Cinematographers clubhouse or seeing Marsha Hunt introduce a rare film. It was an outstanding time and I hope to be back next year for TCMFF’s tenth year!