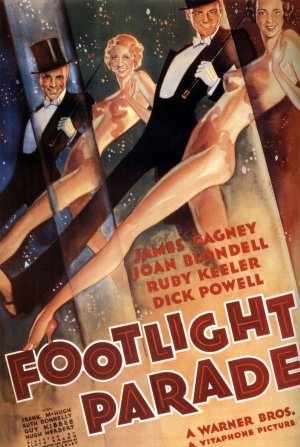 Poster for Footlight Parade. I’m not sure why the girls aren’t wearing clothes.

Plot:
Chester Kent’s (Cagney) Broadway musicals are failing, because of talking films, so he reinvents himself and begins producing the musical numbers shown before the movie begins. His secretary Nan (Blondell) is in love with him and helps him with ideas, but they learn that some of his ideas are leaking out to other similar agencies. To get a movie theater contract, Chester makes a dormitory out of the theater so that no one can leak the ideas.

Trivia:
-James Cagney’s first musical
-Choreography by Busby Berkeley
-It took a week to film the “By a Waterfall” number and much of the time all the girls were in the water and there would be six hours between takes. One daily call production report showed they shot from 9 a.m. to 2:48 a.m. Some reports showed 10 a.m. to 7:45 a.m., according to the book Buzz: The Life and Art of Busby Berkeley by Jeffrey Spivak
-For the “By a Waterfall” number, there was a camera underneath the swimming tank, according to Spivak’s book
-James Cagney campaigned for the lead in this film because he wanted to get away from the tough guy roles, according to the book James Cagney Films of the 1930s by James L. Neibaur
-Cagney’s character Chester Kent is said to be based on choreographer Chester Hale, who was in Hollywood during this time, according to Neibaur’s book.
-One of the top films of 1933
-Preserved by the Library of Congress in 1992
-The “By a Water Fall” number was featured on The Great Movie Ride at MGM Studios in Walt Disney World from 1989 until the attraction closed in 2017.

Highlights:
-Frank McHugh as the dance instructor
-All of Busby Berkeley’s numbers

Still of the “By a Waterfall” number

My review:
“Footlight Parade” is one of my favorite pre-code 1930s musicals, and I think it is some of Busby Berkeley’s best work.

It could be compared to “42nd Street” or the “Gold Diggers” films, which Berkeley also worked on, but “Footlight Parade” has something those didn’t: James Cagney.

While James Cagney is still known more as a Hollywood tough guy, today’s audiences also know him as a song and dance man from films like this or his Academy Award-winning performance in “Yankee Doodle Dandy.” But can you imagine seeing this film for the first time in 1933 and only knowing James Cagney from gangster roles like “Public Enemy” (1931)? I love Cagney’s fast-talking businessman who comes up with wild ideas for musical numbers.

Outside of Cagney’s character, this film has an excellent supporting cast. Joan Blondell is wonderful as always and this is a great pairing for her and James Cagney.

Ruby Keeler plays a mousy secretary, who glams herself up and becomes a dancer. She catches the eye of Dick Powell, who has a considerably small part in this film compared to other Berkeley musicals, but she has no time for him since he hangs around with wealthy Ruth Donnelly.

But one of the cast highlights is Frank McHugh who leads the dance rehearsals and is always so overwrought and stressed to the point of making himself sick. He’s hilarious, per usual.

This musical is also filled with wonderful Pre-Code moments like Joan Blondell telling her enemy “As long as there’s a sidewalk, you have a job” and Dick Powell’s character being a kept man of Ruth Donnelly.

Most of Busby Berkeley’s musical numbers are lavish to the point of ridiculous, but I feel like his numbers in this one, especially “By a Waterfall” take the cake and are some of his best on film.

And I dare anyone to watch this film without walking away with one of the songs written by Sammy Fain and Irving Kahal, or Harry Warren and Al Dubin singing in in their head for at least 24 hours.

Simply put, I love “Footlight Parade” and it’s an excellent example of how Busby Berkeley took the movie musical and made it profitable.