This is the 39th installment of the classic actress beauty tips that I have read about and tested.

Actress Carroll Baker entered Hollywood in the 1950s as a new face, with roles ranging from Rock Hudson and Elizabeth Taylor’s daughter in “Giant” (1956), a virginal southern girl in “Baby Doll” (1956), or a young woman dealing with the mental effects of rape in “Something Wild” (1961).

While her roles varied, Baker was considered glamorous. In an Aug. 1, 1962, article with Lydia Lane, she said when she first started out, she was less concerned with glamour and was more interested in being a good actress.

But according to Lydia Lane’s beauty column, this changed by 1962.

“With success there are obligations and I felt that when I appeared in public, people expected me to look like a movie star,” she’s quoted in Lane’s column.

To achieve her glamorous look, one beauty secret Carroll Baker performed was rinsing her blond hair with beer.

“My hair is oily, and I like to wash it every other day…,” she is quoted in Lane’s column. “I like to set my hair in flat beer and use large rollers. I have tried other wave sets, but nothing gives body to my hair like beer.”

Baker would then sit under her personal hair dryer while her hair set. She would leave the beer bottle open until the beverage lost carbonation and was flat, according to Lane’s column.

After reading this, I decided to give this a try. After all, I‘ve rinsed my hair with champagne for classic films, why not try another alcoholic beverage?

Like Carroll Baker, I have oily hair. Mine is slick, flat and oily so I have to wash it every day. I also generally don’t use any styling products and only wash and dry my hair.

My Ingles grocery store sells beer separately by the bottle, so I was able to buy just two bottles (rather than a whole pack). I decided to use Sierra Nevada beer.

I rinsed my hair on two separate days and styled differently and here’s how it worked out.

Sunday, Aug. 19:
• I opened the Sierra Nevada beer and left it open on the counter overnight so it would be flat. I didn’t refrigerate because that would be too cold when it’s dumped over your head! 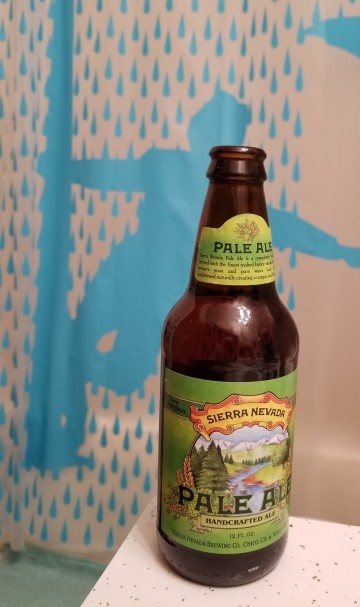 My flat beer ready for the shower.

• I showered like normal and washed my hair with shampoo and conditioner (TRESemmé Deep Cleansing Shampoo and Garnier Fructis Pure Clean conditioner). I rinsed out the conditioner.

• I dumped the Sierra Nevada beer over my head. Even though it was room temperature, the beer still felt cold compared to the shower! I let the beer sit in my hair for 3 minutes (I read this in another article).

• I rinsed my hair slightly with cold water but not completely.

• After towel drying my hair and combing, I rolled my hair in large Conair plastic rollers. Once it was in rollers, I tried to dry my hair with a handheld hair dryer. I kept my hair in the rollers for over an hour.

Hair in curlers after rinsing with beer.

Once I unrolled it my usually flat as a pancake hair had more body and was higher than it usually was. I loved it!

Hair after rinsing my hair with beer and rolling with curlers.

Friday, Aug. 24
• I did all the same steps as above of shampooing, conditioning and lightly rinsing my hair with flat Sierra Nevada beer.

• I wanted to try this again because I generally don’t roll my hair, so I wanted to see what happened if I just washed and dried like I usually do.

My hair didn’t quite have the height or the same level of volume as it did when I rolled it, but it still had more body than usual with washing, beer rinse, and drying.

My hair when just rinsed and dried with beer. No other styling. Not as much volume, but slightly more than usual.

To review:
I was impressed with the results of rinsing my hair with beer. When I was drying my hair, it felt slightly stiff like I used mousse or a volume spray. I really loved how my hair looked when I rolled it, but I probably won’t take the time to do that (I also need assistance from my mom, because I’m inept at styling. Thank you, Mom).

I was surprised that it wasn’t sticky and my hair didn’t really smell all that bad. It smelled like a brewery as I dumped beer over my head, but throughout the day you barely noticed it. I did go to the gym later in the day after using the beer rinse and was worried that I smelled like beer because of the sweat.

While I can’t say that I would frequently rinse my hair with beer, I will say that I would consider doing it again in the future. It was better than any volume styling product I’ve ever used!