Plot:
Mr. Magoo (Backus) is on Broadway playing Ebenezer Scrooge in a stage version of Charles Dickens’ “A Christmas Carol.” Scrooge is visited three ghosts and take him on a journey of self-exploration of his past, present and future.

Trivia:
– First animated holiday special made for television
– Music by Jule Styne and lyrics by Bob Merrill
– Marie Matthews was the voice for young Scrooge
– It was framed around the Broadway show, because the producer Lee Orgel thought that audiences wouldn’t accept Magoo suddenly in the 1800s as Scrooged, according to a 2012 New York Times article.
– The film special is 53 minutes long, though current airings sometimes cut out the story framing of Mr. Magoo being on Broadway.
-Richard Rodgers and Frank Loesser were approached to write the music for the TV special

Mr. Magoo and the Ghost of Christmas Present

My review:
For this week’s Musical Monday, how about something a little different?

I’m starting to run out of holiday musicals, so as we transition to television specials I decided to watch “Mr. Magoo’s Christmas Carol,” one of the first animated Christmas specials played on national networks. I also try to see as many “Christmas Carol” versions as I can, so this checks off this box.

On the television side, there are many musical versions of “A Christmas Carol,” including with Basil Rathbone and Fredric March. But this one is unique as it takes the character of myopically challenged Mr. Magoo and puts him in the role of playing Ebenezer Scrooge on Broadway.

I was most caught off guard by the fact that the music was by Jule Styne, truthfully my favorite song was one that is often now cut from the TV airing – “It’s Great to Be Back on Broadway.” Jule Styne was the composer of shows like “Funny Girl,” “Gypsy,” and “Bells are Ringing.”

For a cartoon story of “A Christmas Carol,” this was surprisingly a by-the-book retelling of the story, complete with Mr. Magoo saying lines like “decrease the surplus population” and other lines that come straight from the story. I expected something to be more like Mickey’s Christmas Carol, which tells the story but uses some artistic license. There are, however, some jokes about Mr. Magoo’s eyesight (like Scrooge being too cheap to buy eyeglasses).

Speaking of Jack Cassidy, I don’t think I ever heard him sing prior to watching this and found his voice extremely pleasant.

I also loved hearing Jim Backus voicing Mr. Magoo. I hadn’t watched a Mr. Magoo cartoon in years prior to watching this TV special, and since had only seen Jim Backus on TV and in classic films. He did well with the singing and it was fun to hear him in character.

I can’t say “Mister Magoo’s Christmas Carol” is going to be a TV special, but it was interesting to see another version of this story. 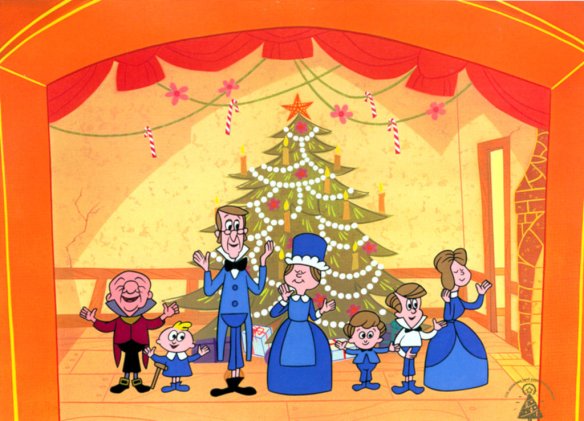