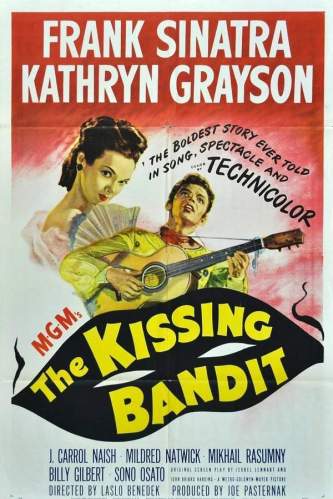 Plot:
Set in the 1800s, shy Ricardo (Sinatra) returns to Spanish California after receiving his education in Boston. Ricardo believes he’s taking over his deceased father’s business, running an inn. However, his father’s friend Chico (Naish) informs him, but the family business is being the Kissing Bandit, a robber who kisses women. When he meets Teresa (Grayson), the daughter of the governor, he is smitten but doesn’t kiss her, much to Teresa’s dismay. Ricardo can’t get close to her because the governor is searching for the Kissing Bandit, so Ricardo pretends to be the tax collector.

Trivia:
– Singer Marion Bell, known for her lead role in Broadway’s “Brigadoon,” was originally announced as the lead in “The Kissing Bandit,” according to The Hollywood Reporter.
– MGM took a loss of more than $2 million because this film was such a failure.
– Frank Morgan and Lina Romay were also announced as the title players by The Hollywood Reporter.
– Tony Martin was cast with Kathryn Grayson and was replaced by Frank Sinatra.
– The only film that featured dancer Sono Osato
– Music by Nacio Herb Brown
– Produced by Joe Pasternak

My review:
At least “The Kissing Bandit” is pretty to look at because the Technicolor is about the only thing this MGM musical has going for it.

“The Kissing Bandit” is often joked to be one of MGM’s biggest musical flops. The actors knew it was bad too — while filming they joked “when is the sequel being made,” according to the Turner Classic Movies article on the film. After the film came out, Frank Sinatra joked he had “been trying to change my name ever since.”

The cast is great, the color is beautiful and the costumes by Walter Plunkett in all sorts of vibrant greens, yellows, red and orange. But the fault here lies in the storyline and the script. It’s not a very interesting premise and is executed to make it even less interesting.

We know we are in trouble with J. Carrol Naish, an American actor who was usually saddled with playing an ethnic role, appears with a fake, bulbous nose and an exaggerated accent. When Picturegoer magazine panned the film, they said: “The one worthwhile performance comes from J. Carrol Naish as The Kissing Bandit’s henchman.” I couldn’t disagree more. His character is annoying and off-putting. 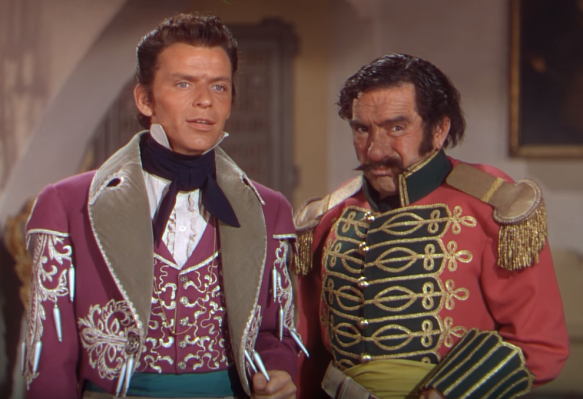 Frank Sinatra and J. Carrol Naish in “The Kissing Bandit” (Screen shot by Comet Over Hollywood)

The leads here are Kathryn Grayson and Frank Sinatra in their third and last film together. Sinatra plays the son of the Kissing Bandit. When he returns home to Spanish California from receiving an education in Boston, Sinatra is expected to take over where his father left off. Being shy and uncomfortable swindling people and kissing strange women, his character is reluctant. Grayson is on the first (and only that we see) stagecoach that Sinatra tries to hold up. She knows he’s the Kissing Bandit and takes it personally that the well-known smooching thief didn’t lay one on her, wondering with the song, “What’s Wrong with Me?” 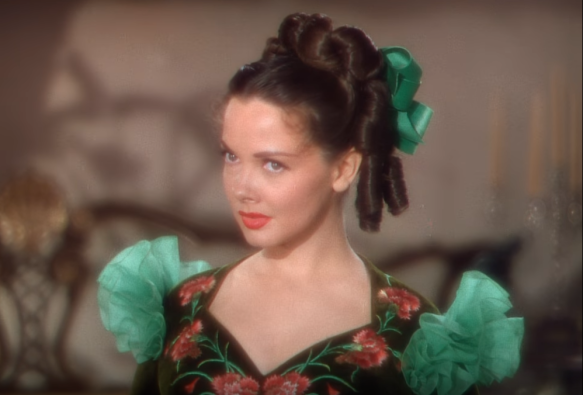 In his very thin years, Sinatra has the look for being a fellow uncomfortable in his new job. To add to the goofiness of this film, every time his character has an idea, the camera zooms out and then in on his face, and there is a cartoon-like “boing” sound as he smiles.

For being one of the stars, Kathryn Grayson has relatively little screentime. She looks very lovely in the Technicolor, but her character often is huffy – made the wasn’t kissed or that Sinatra is dishonest.

For two great singers (who have different singing styles), neither Grayson or Sinatra have very memorable songs. Grayson does sing a great version of “Love is Where You Find It,” a song MGM seemed to love since Jane Powell sang it again in “A Date with Judy.” The song I enjoyed the best from Sinatra was probably “Siesta,” as it had a low, rich tone.

The best part of “The Kissing Bandit” has nothing to do with its lead actors: it’s two specialty dancing acts.
1. Sono Osato performs “I Like You” while trying to woo Frank Sinatra. Osato may not be a name you know from films, because “The Kissing Bandit” was her only film. Osato, who died Dec. 2018 at age 99, was a ballet dancer who originated the lead role of Ivy Smith in “On the Town” on Broadway. She is beautiful and performs an impressive dance, cracking a whip and spinning. 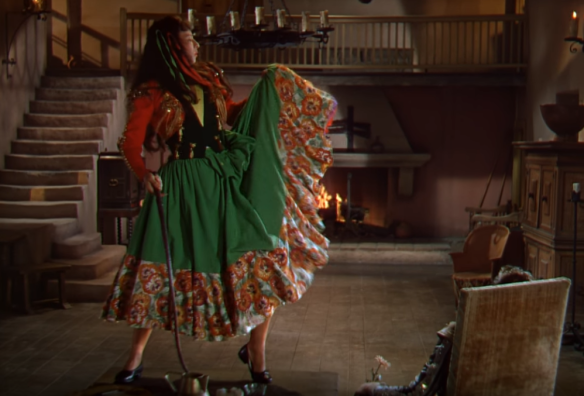 2. Ann Miller, Ricardo Montalban and Cyd Charisse perform “The Dance of Fury” during a party. They have nothing else to do with the plot, but they are a highlight of the film. The dance is essentially Miller and Charisse competing over Montablan, all three in brightly colored costumes. I would say this number is really the only reason to watch “The Kissing Bandit.” 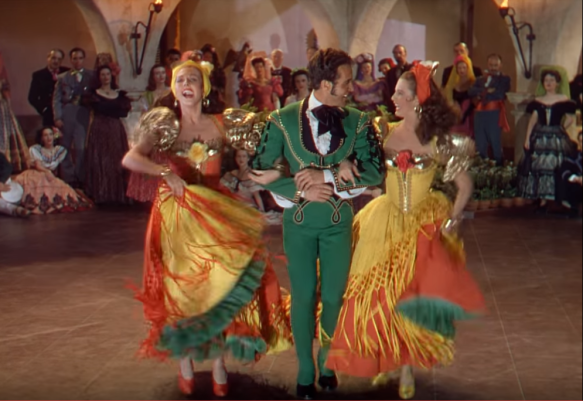 Ann Miller, Ricardo Montalban and Cyd Charisse in “The Kissing Bandit” (Screenshot by Comet Over Hollywood)

Despite “The Kissing Bandit” being a massive failure, it didn’t affect either career of Grayson or Sinatra, (other than bringing them embarrassment) and both had continued on success with their careers.

MGM is heralded for producing some the best musicals on film. Watch “The Kissing Bandit” to see that even the best can make a mistake … and for the dance performances of Osato, Miller, Charisse and Montalban.