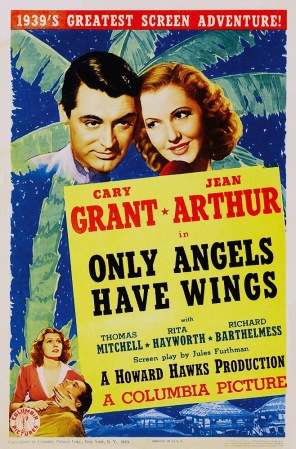 Plot:
Barranca Airways is run by Geoff Carter (Grant) in South America. Geoff and his pilots fly hazardous missions over mountains and in bad weather to carry air mail in and out of South America. His closest friend is veteran flyer Kid Dabb (Mithcell). Performer Bonnie Lee (Arthur) gets off a boat one night and meets Geoff and some of the fliers while waiting for her next boat. She ends up staying; intrigued by the flying business and Geoff. The business is complicated when Bat MacPherson (Barthelmess) and his wife Judy (Hayworth) arrive. Bat previously bailed out of a crashing plane which had the brother Kidd (Mitchell), and Bat’s wife is also Geoff’s old flame. 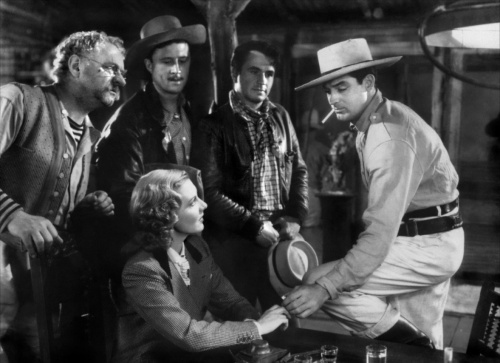 My review: Searching for the “1939 feature”:
Until I started film review series, I didn’t often revisit movies. I would watch movies and keep trucking with other new-to-me viewings because there are so many movies to see!

I’m ashamed to say the acclaimed film, “Only Angels Have Wings” (1939) is one of those many films I had only seen once until revisiting yesterday. I first watched “Only Angels Have Wings” when I was 15 or 16; attempting to see all of Rita Hayworth’s films. For some reason, I recall being disappointed but I don’t know why. As I’ve discovered revisiting more and more films, I think I was too young to appreciate some of these films and also had preconceived perceptions about the roles I wanted my favorite actors to play.

Revisiting the film at least 15 years later, I enjoyed and appreciated “Only Angels Have Wings” (1939), particularly what it represented for the careers of some of the performers.

Cary Grant plays tough, moderately rude and sometimes unlikeable Geoff Carter. Carter runs an airline with his partner, Dutchy, played by Sig Ruman. After playing so many sophisticated and smooth characters, the character of Geoff was a different role for Grant. Other than being handsome, it’s almost curious why Bonnie Lee, played by Jean Arthur, would like Geoff. The only person Geoff really shows any care for is veteran flyer, Kid Dabb, played by Thomas Mitchell.

Thomas Mitchell’s five film roles in 1939 ran the gamut, from a drunk doctor in “Stagecoach” to Scarlett O’Hara’s dad who eventually goes crazy in “Gone with the Wind.” Mitchell’s character of Kid is a loyal and also caring character. When Bonnie Lee finds her emotional reaction to the death of a flyer unwelcome, Kid speaks with her and gives her the score. He also needs flight so much in his life that he might as well be a bird. But his love of flight is taken away when his sight begins to fail him.

Jean Arthur was only in two film roles in 1939, the other was “Mr. Smith Goes to Washington” which she co-starred with Thomas Mitchell. While Howard Hawks wished Arthur played the character of Bonnie Lee sexier (according to Todd McCarthy), I still think she played the character well as an out of place person coping with situations out of her element. Arthur’s screentime isn’t as substantial as other characters, but she leaves an impression.

“Only Angels Have Wings” was Richard Barthelmess’s first film role in three years. While Barthelmess was a top star in the 1920s and early 1930s, his career was waning. This career decline almost makes him the perfect fit for the flyer who can no longer find work due to a plane crash – he bailed out and allowed the mechanic to die. His character Bat MacPherson is pathetic but also needs work. Barthelmess was only in three more films after this role.

Twenty-year-old Rita Hayworth plays Bat McPherson’s wife, Judy, who was also an old flame of Geoff. For some reason, in my teenage memory, I remembered her as being mean and more of a rival to Jean Arthur. She isn’t and in fact, the predictable Hayworth-and-Grant-rekindle-their-old-love plot line thankfully doesn’t occur. That would have been an easy plot device, and I’m glad it doesn’t happen. Instead, Judy is desperate to know why her husband is unemployable and also why he gets the most dangerous flights. The role of Judy started a turning point for Hayworth, who was cast in her first true A-budget picture. In one to two years, Hayworth was a star.

Outside of the leads, “Only Angels Have Wings” has an excellent cast of supporting actors. Other pilots are played by John Carroll, Allyn Joslyn, Noah Beery Jr and Donald Barry. Sig Ruman and Victor Kilian round out the cast. I like that Sig Ruman plays a different character than usual. He can play a grouchy shop owner, evil German or a bumbling comedian. But here, he is able to show compassion and concern, while also having to mask it like the rest of the men to push forward.

I would be remiss if I didn’t mention the cinematography by Joseph Walker, and the fantastic flight filming by Elmer Dyer.

“Only Angels Have Wings” could have just been an adventure film with illicit romance mixed in, like some many films of this era were. But it’s much more, showing pilots risking their lives and living one day, one hour at a time to get by.