Plot:
Singer and performer Al Jackson (Jolson) loses both his singing voice and all of his money, due to a tax mix-up. Al leaves the city and heads to the country for a rest. He meets Ruth Haines (Roberts) and her niece Sybil (Jason), who rent him their country home. Ruth is an aspiring playwright, who Al falls for while trying to help with her career. Sybil wins over Al’s friends (Horton, Jenkins). 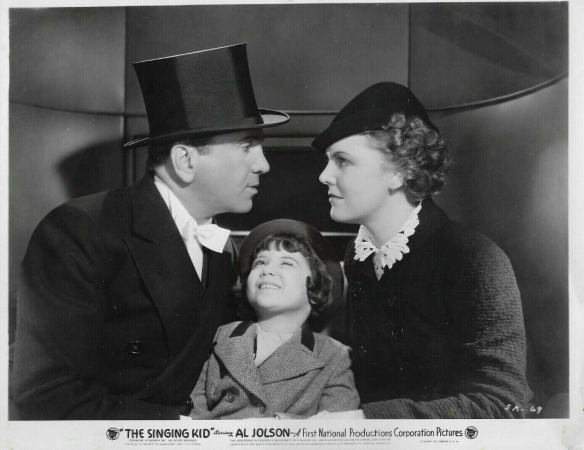 Trivia:
• The song “I Love to Singa” was written by Harold Arlen and E.Y. Harburg for this film. It later became even more popular by the Merrie Melodies cartoon “I Love to Singa,” which features a singing owl, Owl Jolson, which mirror “The Jazz Singer” storyline.
• Beverly Roberts’ second film
• Al Jolson’s last film under contract with Warner Bros.
• Busbey Berkeley directed some of the scenes, according to Sybil Jason’s autobiography, What’s It All About, Sybil?

My review:
Even if you aren’t familiar with “The Singing Kid” (1936), you most likely are well familiar with a song that runs throughout the film.

Have you ever watched the Merrie Melodies cartoon featuring a young Owl Jolson who wants to “sing-a, like the moon-a and the June-a and the spring-a”? If so, then you will know the main song from this film and hear it many times.

Before watching this film, I only knew “I Like to Sing-a” from that cartoon of the same title. But you hear the Harold Arlen and E.Y. Harburg tune many times in “The Singing Kid.”

Starring Al Jolson, this is the last Warner Bros. film Jolson starred in — he had been at the studio since “The Jazz Singer” (1927). The former Broadway performer is well known for donning blackface when he sings.

And “The Singing Kid” is no exception.

“The Singing Kid” begins with a three-minute montage of Al Jolson performing various songs, all in blackface (except for the last couple of songs). Be prepared if you start this film — the montage directly follows the credits and you are smacked in the face with it. It’s not surprising in a Jolson film, but it’s offputting and tiresome.

This continues in another number, “Save Me Sister,” with specialty singer Wini Shaw performing a spiritual number in blackface.

Singer and bandleader Cab Calloway is featured in this film and is in the “Save Me Sister” number. I have to wonder what he thought of it all.

Despite all of this, there is a silver lining, though it may be slim. The supporting cast is the real highlight of “The Singing Kid.”

Edward Everett Horton and Allen Jenkins are hilarious in “The Singing Kid,” particularly when they play jacks and dolls with child star Sybil Jason.

Beverly Roberts, who isn’t as well known today, is lovely in one of her first film roles. Admittedly, she is an odd romantic choice for Al Jolson – though who does fit with him?

But the true bright spot of the film is child star, Sybil Jason. She’s adorable and her interactions with the adult stars, notably Jenkins and Horton, are so much fun.

Cab Calloway’s role is brief, and we only get to see him in a few numbers. But seeing him dance and sing in this film is still a treat – particularly for anyone who mainly knows Calloway from “The Blues Brothers.”

I truthfully am not a fan of Al Jolson, so I only really watched this film because it’s a musical (how I suffer for my readers). The blackface in the film is terrible. But I stayed for Sybil Jason and enjoyed her scenes in the country as Jolson recovered from his lack of voice. I was sorry when Jolson’s character recovered and was able to sing again.