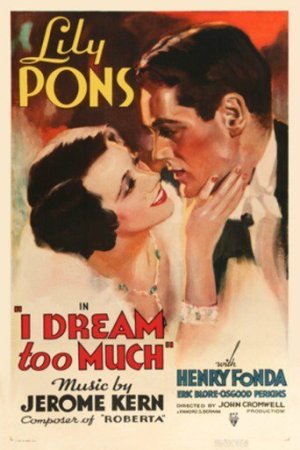 Plot:
Annette Monard (Pons) is training to be an opera singer. When she goes to a carnival one night, she meets aspiring composer Jonathan Street (Fonda), who is writing an opera. The two get married when Johnny is drunk and struggle financially as he writes his opera. As Annette tries to sell his opera to a producer, the producer (Perkins) is more interested in Annette’s voice and makes her a prominent opera star. Jonathan feels like an outsider to her new life.

Trivia:
• The first film of opera singer Lily Pons. She was only in four films.
• Henry Fonda’s third film
• The original working title was “Love Song.”
• Music by Jerome Kern 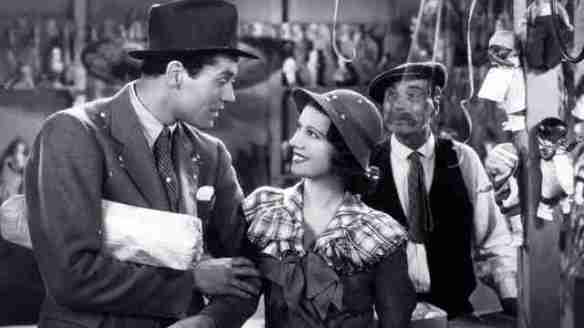 Henry Fonda and Lily Pons in “I Dream Too Much.”

My review:
In the 1930s, opera singers were popular in musicals. By 1935, Metro-Goldwyn-Mayer had Jeanette MacDonald, Paramount had Grace Moore, and by 1936, Universal had Deanna Durbin.

RKO Pictures’ response to the soprano craze was signing French opera singer Lily Pons, who debuted as an unknown in 1931 with the Metropolitan Opera, becoming an overnight success. Though Pons’s career was primarily in opera, she made four films.

Her first film was “I Dream Too Much,” which co-starred her with another Hollywood newcomer, Henry Fonda in his third film role.

In the film, Pons is a singer who marries an aspiring opera composer, played by Henry Fonda, after only know each other for a few hours. While he struggles to get his opera produced, she becomes a successful opera singer, which he resents.

This movie is a bit convoluted and shifts in all directions from what you think it will do from the beginning (and not in a good way):
– The movie starts with Annette, played by Pons, training as a singer with her uncle. He’s angry that she isn’t taking her singing seriously and says he will send her to a convent. Annette escapes the house, running into Jonathan, played by Henry Fonda, and the two go to a carnival. From here, you would think the plot would be that her family starts looking for her? Nope, next …
– After a night together at the carnival, Annette and Jonathan (who doesn’t want to get married) get married. Annette focuses on being a wife while they struggle along financially, and Jonathan tries to get his opera produced. Jonathan hears his wife sing (he didn’t know she could) and puts his career on hold so she can work as a singer, but he gets mad about a song she sings in a cafe.
– To help out Jonathan, Annette takes his opera to a producer. But when the producer hears her sing his opera, he is more interested in her voice. As her success grows, Jonathan feels pushed aside and gets mad. Then Annette says she’s going to leave singing because of how it makes her husband feel.

I feel like there is a common theme in this movie: Henry Fonda’s character of Jonathan is angry.

Pons’s character of Annette is dizzy and shrill one minute and then singing beautifully the next.

While her singing is beautiful, as a comedic actress, Lily Pons is not my favorite. She was only in a total of four films; three from 1935 to 1937 and one appearance as herself in Carnegie Hall (1947). While her film career didn’t pan out, she stayed popular on the stage and on the radio.

“I Dream Too Much” (1935) has a theme that irks me in classic films – the wife can’t work and be successful, because traditionally the man is the breadwinner. And usually, in these 1930s films, the wife will throw away her career — even if it means them being broke because the husband is unemployed — so that they can be broke and happy and stay married. It drives me crazy.

Thankfully, this film doesn’t end that way, but for a minute, you think it will.

“I Dream Too Much” is interesting, because it gives us a glimpse of a famous opera singer we otherwise wouldn’t get to see today. But it’s only interesting as a historical record.