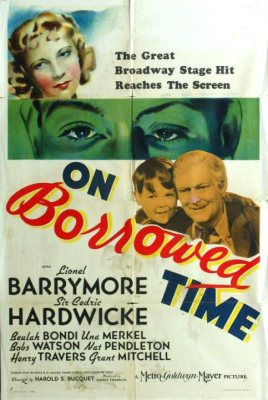 Plot:
When Pud’s (Watson) parents die, he goes to live with his grandparents Julian Northrup (Barrymore) and Granny Nellie (Bondi). Because of Pud’s inheritance, his aunt Demetria (Malyon) tries to adopt Pud using his grandfather’s bad influence as an excuse. When Death, named Mr. Brink (Hardwicke), visits to take Gramps, Gramps traps Death in a tree so he can stay with Pud and keep him away from Aunt Demetria.

Other trivia:
• Adapted from the book 1937 “On Borrowed Time” by Lawrence Edward Watkin, which was adapted into a Broadway play in 1938.
• Lionel Barrymore was in a wheelchair because of his arthritis.
• Cedric Hardwicke was billed as Sir Cedric Hardwicke.

My review: Searching for the “1939 feature”:
There were many versions of “On Borrowed Time” before it finally made it to the screen in 1939.

Inspired by a legend, Lawrence Edward Watkin’s book “On Borrowed Time” was published in 1937.

The book was then transformed by Paul Osborn into a Broadway play, which ran from Feb 3, 1938, to Nov 5, 1938. Directed by Joshua Logan, the play starred Dudley Digges as Gramps, Peter Miner as Pud and Dorothy Stickney as Granny, and took place in the summer before World War I broke out.

Then in the spring of 1939, Metro-Goldwyn-Mayer began production on their screen version, which was released in June 1939. The setting was updated to present and Lionel Barrymore took the role of Gramps, Beaulah Bondi as Granny and Bobs Watson as Pud.

By this time in his career, Barrymore was wheelchair-bound due to his painful arthritis, but this doesn’t hold him back from giving outstanding performances during this time frame of his career.

Bondi is made up to look much older than she was during this time. She’s fabulous as always but has a smaller role than I expected, but she’s wonderful.

Now, if you love child actor Bobs Watson like I do and marvel at his ability to turn on the waterworks, he doesn’t disappoint. I think Bobs may cry more in “On Borrowed Time” than any of his other films. It almost breaks your heart though, because you wonder what they did to this child to make him cry like this.

The supporting cast is filled with many of the studio era’s best character actors:
Eily Malyon plays the greedy aunt who wants to take custody of Watson’s character and she is as detestable as she always can be on screen. Somehow Malyon rarely plays a nice character!

The most important character is played by Cedric Hardwicke, who plays Mr. Brink, or death. While death is supposed to be the bad guy, Hardwicke plays Death as sophisticated and also compassionate.

Gramps traps Mr. Brink in a tree so that he doesn’t die so he can stay on and look after Pud, worrying what will happen to his orphaned grandson when his grandparents are dead.

And while Gramps isn’t dying, neither is anyone else.

The story is interesting because it shows that while death is scary, it is also necessary. As Mr. Bink is unable to perform his duty, people are staying alive but maybe in pain and with a poor quality of life. This point is driven home when Gramps and Pud experience a tragedy.

While the idea of the story is interesting, I do feel like the 110-minute movie, is a bit too long. I feel like much of what occurs could have been summed up in about 80 minutes. It feels like it’s about 20 minutes too long.

When the film was released in 1939, the critics didn’t feel like it offered quite the “emotional punch” the original Broadway play offered.

However, this film is an interesting look at the different phases of life and is a bit different than others released in 1939.