Trivia:
• “Ac-Cent-Tchu-Ate the Positive” was written by Harold Arlen and Johnny Mercer for this film.
• Last credited film of director Mark Sandrich who died in March 1945, three months after “Here Come the Waves” premiered.
• Edith Head is credited with designing the “non-military costumes.”
• For the film, director Mark Sandrich consulted with Capt. Mildred Helen McAfee, the director of the Women’s Reserve of the Navy.
• Initially, Bing Crosby’s character can’t enlist, because he’s colorblind. Crosby was colorblind in real life, according to his biographer Gary Giddins.
• A 15-year-old discovery, Gloria Saunders of Columbia, SC, was announced to be a lead in the film, according to a March 28, 1944, news brief. However, Saunders did not appear in the film.
• Paramount tried to secure a second female lead, before settling on Hutton playing a dual role, according to an April 26, 1944, Los Angeles Times news brief.
• An April 28, 1944, news brief said the film was going to be in Technicolor. The final outcome was not in Technicolor. By May 4, 1944, it was announced that the musical would not be in color, calling it a “death blow” to the film.
• Anabel Shaw is billed as Marjorie Henshaw.
• The song “My Mama Thinks I’m a Star” was written for the film but not used. 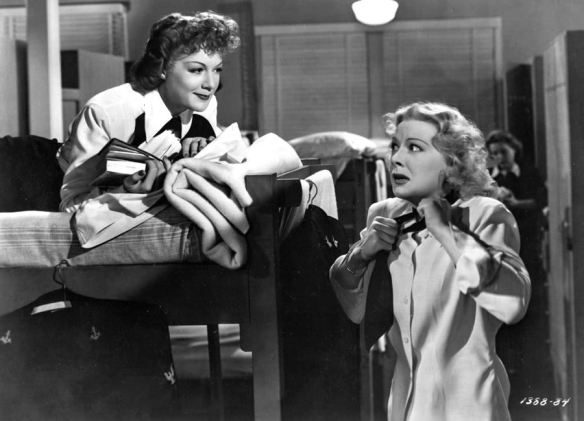 My review:
This week’s Musical Monday is a mix of military recruitment film and musical comedy.

Since WAVES aren’t in mainstream lingo in 2020, I’ll give a quick rundown for those not familiar with the term. WAVES – or Women Accepted for Volunteer Emergency Services – was the women’s branch of the United States Navy, which served during World War II. The group was created in 1942 and disbanded in 1946.

“Here Come the WAVES” (1944) largely serves as a recruitment film for the women’s branch. Many might dismiss this, but I find this film interesting because there aren’t many classic films that I have run across that do this – particularly musicals. There are many World War II-era films that focus on military nurses, such as Cry Havoc (1943) and So Proudly We Hail! (1943), but few dedicated to women in the various service branches.

In a double role, Betty Hutton plays twin sisters Susie and Rosemary. Susie is blonde, excitable and hair-brained (the character we are used to seeing her play). Rosemary is red-headed and more subdued and refined. I know not everyone is a fan of Hutton’s zany “vitamin-pill-with-legs” entertainment, so don’t be completely detered by the double role – the Rosemary character is manageable. I like Hutton, but recognize that a little bit goes a long way.

It’s fun to see the 1944 camera tricks of the two Huttons standing together or talking. But I also think it would have been fun to see Betty Hutton’s real-life sister Marion Hutton perform in the film with her. Two years prior, Marion performed with Glenn Miller’s band.

In the film, the sisters are night club performers, when Rosemary decides to join the WAVES and Susie reluctantly follows. They both end up enjoying their new work.

The romantic leads for both Huttons are Sonny Tufts as sailor Windy Windhurst and Bing Crosby plays famous singer Johnny Cabot, who is 4F until the rules are eased up and Cabot is drafted into the Navy. Susie is a major fan of Johnny’s and Rosemary can’t be bothered by Johnny, who ends up falling for her.

The film is quite funny in parts, including at the beginning when we are made to believe that Johnny really is Susie’s boyfriend. We soon realize that she is just in love from afar. There’s a hilarious scene where the sisters go see Johnny perform and the auditorium is filled with swooning bobbysoxers, fainting left and right. Ushers run out with stretchers to collect the fainted girl.

The film is filled with songs written by Johnny Mercer and Harold Arlen, including their hit “Ac-Cent-Tchu-Ate the Positive,” which won the pair an Academy Award for Best Song.

I love the song “Ac-Cent-Tchu-Ate the Positive” (and listen to it frequently during particularly negative times), but it’s really painful that this song is performed in blackface. Bing Crosby is dressed like a blackmail carrier and Sonny Tufts is dressed like a doorman. This type of entertainment is obviously not acceptable today. Sonny Tufts appears to be doing his own singing, as I can’t find documentation that he was dubbed – so I was surprised that he was doing his own singing. This number does feature great dancing from the chorus.

However, Charles Lang’s photography is beautiful, and even “glittering.”

The non-military costumes were designed by Edith Head. I also have to note, that it bothered my dad that the girls wore white summer uniforms, and the men wore navy winter uniforms. Also, on a funny note, one news brief said that Betty Hutton got shin splints while wearing the low military high heels.

The film ends with a montage of WAVEs and all the various work they can do. “Here Come the WAVES” is fairly entertaining and has great music. It may not be one of the best-known films of Bing Crosby or Betty Hutton, it is still worth seeing for the military recruitment aspect.