Plot:
In a follow up to HERE COMES MR. JORDAN (1941), Danny Miller (Parks) is directing a Broadway musical about the seven muses with Terpsichore, the muse of song and dance. When the Muses learn that the musical portrays them as fast-living women, marrying multiple men at once, an outraged Terpsichore (Hayworth) goes down to Earth with the help of Mr. Jordan (Culver). Danny’s life (literally) depends on the success of the play. Terpsichore, under the name Kitty, tries to revamp the Broadway musical as star and make it accurate to Greek life.

Trivia:
• Follow-up to the comedy “Here Comes Mr. Jordan” (1941). The only actors who reprise their roles are James Gleason as Max Corkle and Edward Everett Horton as Messenger 7013. Roland Culver is made up to look like Claude Rains.
• Remade as Xanadu (1980)
• The film was inspired by the Broadway show “One Touch of Venus” starring Mary Martin, which was mixed as a sequel to “Here Comes Mr. Jordan”
• Rita Hayworth is dubbed by Anita Ellis. Adele Jergens is dubbed by Kay Starr. Larry Parks is dubbed by Hal Derwin. This was the only film where Kay Starr dubbed an actor.
• The Breen censorship office objected to Rita Hayworth’s diaphanous Greek costumes that looked like she had nothing on underneath, according to The Merchant Prince of Poverty Row: Harry Cohn of Columbia Pictures by Bernard F. Dick.
• Dorothy Hart is billed as Dorothy Brady.
• Jean Willes is billed as Jean Donahue.

Highlights:
• Gorgeous Technicolor cinematography
• The film exhibits Rita Hayworth’s range of dancing from modern dance in the Greek version of the show to the boogie woogie numbers in the finished film.
• Jack Cole choreography

My review:
I was a teenager and sick at home, when my mom checked out “Down to Earth” from the library for me to watch. I was so excited, because I was dying to see this musical – I was trying to see every Rita Hayworth movie and musical that I could. I don’t know what I expected at the time – I had no knowledge of the plot, and I hadn’t seen “Here Comes Mr. Jordan” yet. I remember being disappointed for whatever reason. I think partially because I didn’t understand the source material, and I wasn’t into Larry Parks as the leading man.

Now, revisiting this film for the first time in at least 15 years, I found myself enjoying it more as I often do with these revisits. I’ve found keeping your expectations low for a revisit makes you like the film better.

Six years after the release of “Here Comes Mr. Jordan,” Columbia Pictures released a sequel in the form of a Technicolor musical. This time instead of messengers from heaven, a Greek muse travels down to New York City (with the help of heaven) to improve on a Broadway musical.

Rita Hayworth plays the Greek muse Terpsichore, the goddess of dance and chorus, and Larry Parks plays Danny Miller, the musical director and producer, who also is starring in the show. Miller’s show, “Swingin’ the Muses,” follows two military pilots who crash on Mount Parnassus, meeting Terpsichore (played on stage by Adele Jergens). The man crazy goddess decides to marry both pilots.

Outraged, the real Terpsichore goes to see Mr. Jordan (Roland Culver made to look and sound like Claude Rains), who helps her travel to Earth. As a mortal named Kitty, Terpsichore replaces the lead in the Broadway musical and convinces Danny to change the plot to give a more accurate representation of Greek mythology. The problem being that it makes the musical a boring flop, and Danny’s life literally depends on the success of this show.

The only carryovers from “Here Come Mr. Jordan” are James Gleason as Max Corkle, who is now a Broadway agent, and Edward Everett Horton, as a heavenly messenger who thoroughly disapproves of Mr. Jordan helping a Greek goddess. Max Corkle also shows a photo of Robert Montgomery from his role in “Mr. Jordan.”

“Down to Earth” isn’t the best musical, and Rita Hayworth reportedly said it was her least favorite film. However, it is visually beautiful to look at. The songs are so-so, but the dances are the real highlight here.

I can’t think of another actress who better fits the bill of “goddess” than Rita Hayworth. With costumes designed by Jean Louis, Rita Hayworth is usually dressed in gauzy costumes – from dresses to Broadway costumes to her Greek goddess outfits. And she truly looks like a goddess.

When Hayworth crashes the Broadway musical by dancing in the chorus, she is wearing a filmy green day dress with gold sequin accents and gold sequin shoes.

At this point in her career, Anita Ellis was dubbing Hayworth’s singing voice. I argue that Ellis and Martha Mears (who dubbed her in earlier films) fit her speaking voice and look better than her later dubbers, like Jo Ann Greer.

Adele Jergens’s role is small in this film, but one highlight is that famous singer Kay Starr is dubbing her. As far as I can tell, this is the only time Starr substituted her singing voice for an actress. 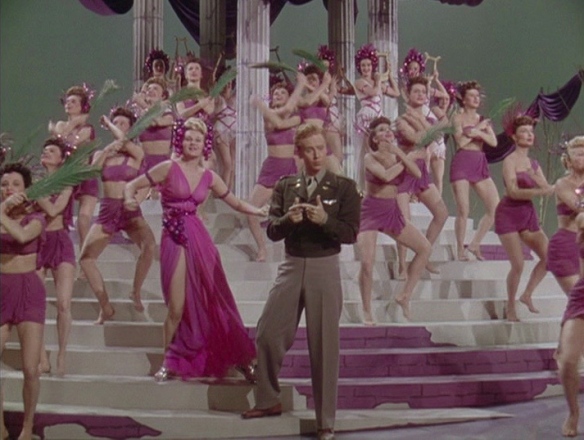 Now that I know who Larry Parks is (I didn’t know him as a teen), I didn’t dislike him as a leading man as much, but he is a weak leading man. His career was on the rise at this point, but only in a few years, his career would be ruined because of the House of Un-American Activities accusations.

I would argue that Hayworth is the actor who carries this film.

Also co-starring is dancer, actor Marc Platt, who played Dream Curley on the original Broadway cast of “Oklahoma.” Platt previously starred with Hayworth in “Tonight in Every Night.” While I feel he is wasted, we still get to see some impressive dancing. With choreography by Jack Cole and Platt as a dancer partner, I feel like the true highlight of “Down to Earth” is the range of dancing we get to see from Hayworth. I think people often forget that first and foremost – Hayworth was a dancer.

While the Greek mythology musical is supposed to be a plot, the dance number in the film is pretty magnificent. Platt and Hayworth’s dancing is excellent, and we get to see both perform modern dancing, rather than just hoofing. Later, we see more boogie woogie and jazz dancing from Hayworth.

As an aside: If you look this movie up on IMDB, you may see a piece of trivia that I submitted when I was 14 years old after watching this movie: In one scene, Hayworth throws a snowglobe and it looks like the globe thrown by Charles Foster Kane in “Citizen Kane,” played by Orson Welles. Hayworth and Welles were divorced this same year. I don’t really know if it was supposed to look like “Citizen Kane,” but this goes to show that anyone can submit trivia to IMDB so be careful what you believe.

Overall, “Down to Earth” isn’t the best movie musical, but it is a visually gorgeous escapism piece. Get lost in the colors, costumes and dance.