Plot:
Bud Hooper (Dix), a cadet at a military school, sends a prom invitation to movie star Lucille Ball (as herself). Ball’s agent thinks it would be a great publicity stunt and she attends the dance, much to the chagrin of his girlfriend Helen (Weidler) and to Ball. However, since it was Helen who was approved to attend the dance, Bud as Ball pose as Helen.

Trivia
• Film version of the Broadway musical that opened Oct. 1, 1943. Rosemary Lane played the actress in the musical on Broadway but was not brought to Hollywood for the film.
• Nancy Walker, Kenny Bowers, Tommy Dix, Jack Jordan, Stanley Donen and June Allyson were the only actors in the original Broadway play who reprised their roles in the film though they were initially told everybody would go to Hollywood, according to Allyson’s autobiography.
• Lana Turner was originally considered for the role of the movie star. However, she became pregnant and was replaced by Lucille Ball, according to the Lucille Ball biography “Ball of Fire.”
• Tommy Dix’s first film. He was only in two films.
• Former child actor Virginia Weidler’s last film.
• Vocal talent includes:
– Gloria Grafton dubbed Lucille Ball
– Jeanne Darrell dubbed Virginia Weidler
– Ralph Blane dubbed Jack Jordan
• Feature film debut for Stanley Donen, June Allyson, Nancy Walker and Kenny Bowers.
• Jack Jordan’s only film.

Highlights:
• “The Three B’s” is the best number and a show stopper in the film, as well as on stage. This is the only considerable screen time Walker, DeHaven and Allyson have.
• Technicolor cinematography
• Nancy Walker and Harry James dancing together in “Alive and Kickin'” 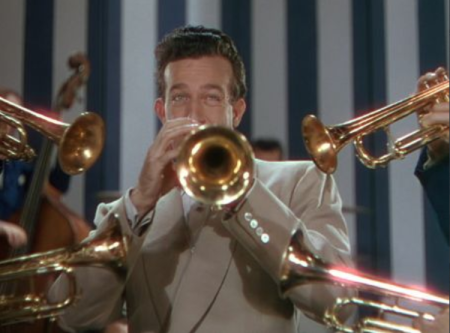 My Review:
I remember the first time I watched “Best Foot Forward” (1943). I was 14 and had just come home from a sleepover party (where I hadn’t gotten very much sleep) and sleepily watched a movie that I had been eager to see.

For some reason, I was disappointed in this Technicolor musical then (most likely, not enough June Allyson who was a big favorite at that point).

But now every couple of years, I rewatch this MGM musical, and each time I like it a little more.

As far as the plotline goes, it’s fairly simple and irritating in parts:
The Winsocki Military Academy prom is approaching and student Bud Hooper, played by Tommy Dix, invites Hollywood actress Lucille Ball, as herself, to his prom. Surprisingly, Lucille Ball arrives at the dance; urged by her agent for good publicity. However, Bud has also invited his girlfriend Helen Schlesinger, played by Virginia Weidler. Since he can only have one date and Helen is who is down as his formal date, he tells Helen not to come to the dance and for Miss Ball to pretend to be Helen so he doesn’t get in trouble.

Hijinks ensure as Tommy and his friends try to keep Miss Ball out of sight at the dance and away from the other students who want to dance with her.

Truthfully, you have to think that if the boys had just told the school, “Hey an actress is coming to the dance!” they would have been fine with it, since the school would also have gotten publicity. But like most films, no communication is what makes the plotline!

A comedic trio of young ladies who traveled to the dance have the laughs: This includes Nancy Walker, June Allyson and Gloria De Haven. Walker and Allyson made their feature film debut with “Best Foot Forward,” where De Haven had appeared in a few films as a child. While Allyson and De Haven don’t have many lines, it’s Walker who has the laughs. She was sent as a blind date for the dance and spouts self-deprecating humor.

But while the plotline is goofy, the musical performances are what make “Best Foot Forward” worth watching.

Harry James plays himself as he leads his Music Makers in playing pop standards of the day, including a performance of Count Bassie’s “Two O’Clock Jump.” James even performs “The Flight of the Bumblebee” which is impressive to the audience, but not the students.

The “Bumblebee” performances leads us to our comedic duo performing “The Three B’s,” and sharing that at a dance, they don’t want to hear Johann Sebastian Bach, listen to Ludwig Beethoven and
don’t give a hoot for Johannes Brahms. Walker wants boogie woogie, De Haven wants the blues and Allyson wants barrelhouse.

I am not exaggerating when I say “The Three B’s” is one of the best musical numbers ever shown on-screen. It’s funny, exuberant and so fun to watch. While the three young ladies sing, the classmates and their dates provide the chorus. Every time I watch this number, I want to stand up and applaud.

In her autobiography, Allyson said the number brought down the house every night on Broadway as well.

Notable is that this is the last film of child actress Virginia Weidler, who’s first film was released in 1931 when she was four years old. At age 16, Weidler walked away from the film industry. Going from a scene-stealing child star to a lovely teen, it’s a shame that we didn’t know how her career would have panned out as an adult. But sadly, this is a thankless last role for Weidler. She looks lovely and has pretty clothes, but has little screentime.

In the stage version, the famous actress attending the prom was played by Rosemary Lane. For the film role, MGM originally cast Lana Turner, who had to drop out due to pregnancy. Lucille Ball replaced her, which is interesting because while Ball was famous, in 1943 she hadn’t yet reached the heights that she has today – in fact, she was disappointed in the roles she was being in cast in. So casting her here as a “big Hollywood star going to a dance” seems a bit odd to me.

While filming the movie, Ball and Allyson became friend, and Ball encouraged Allyson to stay in Hollywood when she was ready to head back to Broadway.

Others from the original Broadway cast include leading young men, Tommy Dix, Kenny Bowers and Jack Jordan. While this film was a hit, did not stay in Hollywood.

While the boys were in the original cast, I think it’s strange that some of them were obviously dubbed, like Dix in “Buckle Down, Winsocki.” Maybe I’m wrong, but his voice here doesn’t match his singing in the rest of the film.

While I initially had my doubts about what I felt about “Best Foot Forward,” I now really enjoy it. 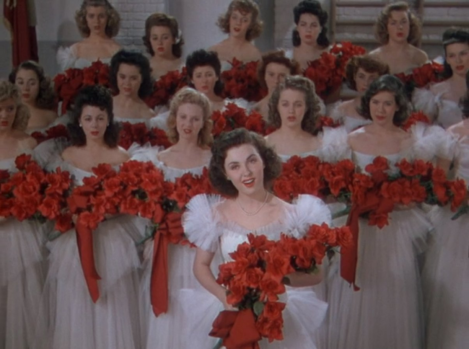 To top it all off, it is visually gorgeous in Technicolor and includes gorgeous costumes (Lucille Ball’s outfits are breathtaking!). I love the use of color used here, even though much of the cast wears similar outfits – the young men in cadet blue and the young ladies in white formals. But it is filmed in such a vibrant way, and I always find the first shot of “My First Promise” with the young ladies in white with huge red rose bougquets to be breathtaking.

But let me say this: If you are one of those individuals who don’t like June Allyson (I don’t share your sentiment, sorry), don’t let her minor role turn you away from this film.

Because you have to see “The Three B’s” – especially if you call yourself a musical lover.