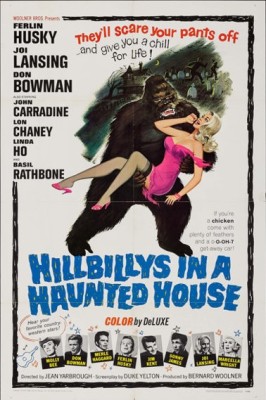 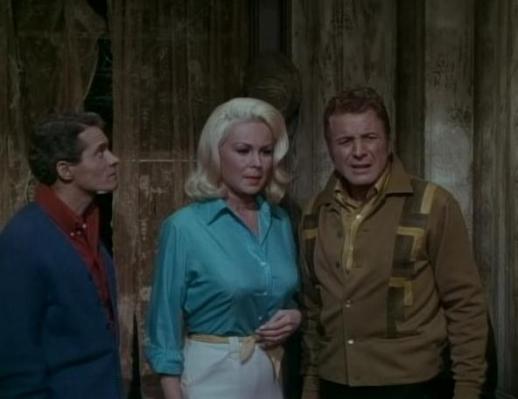 My review:
With a 2.6 IMDB rating and a RiffTrax episode dedicated to this film, I went into “Hillbillys in a Haunted House” (1967) cringing at the idea of watching it. On top of everything, the title is even misspelled – it should be “Hillbillies” rather than “Hillbillys.”

And I’ll tell you something – I may be one of the few reviews giving this country music-horror-espionage comedy a break. Figuring this would be terrible, it wasn’t as terrible as I thought it was going to be. (I watched the straight film and not the RiffTrax).

Now that said, “Hillbillys in a Haunted House” isn’t a good movie. But I don’t feel like it’s any worse than it’s contemporaries of it’s time. I say this looking to the television show “Beverly Hillbillies” (which I can’t believe was on for 9 years) or “Hootenanny Hoot” (1963).

The humor and plotline are pretty similar to low budget comedies of the 1960s, like the beach films or those produced by American International Pictures.

Country music is performed throughout, but once Husky, Lansing and Bowman get out of the haunted house, they head to the jamboree in Nashville, Tenn. The last 10 minutes if a country music concert featuring songs from Molly Bee, Merle Haggard, and Marcella Wright.

Rathbone and Carradine usually played refined and intelligent men, and here they are a bit dopey, but are also fairly humorous in the process.

But there are some sad point to this goofy film:

By this point in her career, Joi Lansing was playing lousy roles like this, and she was unhappy about this. Also unfortunately, Lansing died a few years later in 1972 of breast cancer.

I also felt sad for Rathbone, Carradine and Chaney Jr.

But on the plus size, it features some fairly good country music. However, while this isn’t the best film, I feel like if you can watch any beach movie or anything by AIP, you can probably get through “Hillbillys in a Haunted House” – but you will still be irritated by the misspelling of the title.

1 thought on “Musical Monday: Hillbillys in a Haunted House (1967)”