Plot:
A musical remake of the 1940 film “Shop Around the Corner,” “In the Good Ole Summertime” takes place in the early 1900s in Chicago. Veronica Fisher (Garland) is corresponding through letters with an unknown man.

Trivia:
• Based on the Hungarian story “Parfumerie” by Miklos Laszlo. The story was first made into the film “Shop Around the Corner” (1940) starring Margaret Sullivan and James Stewart, which this film is a musical remake of. “Shop Around the Corner” was again remade in 1998 with “You’ve Got Mail.”
• First credited film role of professional violinist Marcia Van Dyke.
• Actor Buster Keaton was cast after he was the one who devised a way to fall and break Mr. Oberkugen’s violin. Buster Keaton also worked with Van Johnson on how to ruin Judy Garland’s bird hat at the very beginning of the film.
• June Allyson and Frank Sinatra were originally cast at the leads and it would be titled as “The Girl from Chicago,” according to historian John Fricke. Neither were available.
• The song “Last Night When We Were Young” by Harold Arlen and E.Y. “Yip” Harburg was in the film and performed by Judy Garland but was cut from the final movie.
• Judy Garland’s second to last MGM film. The last was “Summer Stock” in 1950.
• Liza Minnelli, 3, in her screen debut playing her mother’s child.
• Buster Keaton’s first at MGM since 1933.

Van Johnson and Judy Garland in “In the Good Old Summertime.”

Judy Garland performing in “In the Good Old Summertime.”

My Review:
As rule, Comet Over Hollywood generally thinks most musical remakes are a bit goofy. But this week’s Musical Monday is an exception.

The story of that “In the Good Old Summertime” (1949) is based on has a long history:
• The story was originated by Miklos Laszlo in 1937 in the Hungarian stage play, “Parfumerie”
• In 1940, Hollywood adapted the play to “Shop Around the Corner” (1940) starring Margaret Sullivan and James Stewart, and directed by Ernst Lubitsch. The film was still set in Budapest.
• The story was transformed into a musical, “In the Good Old Summertime.” Starring Judy Garland and Van Johnson, the time was set in 1900 in Chicago.
• In 1963, “Parfumerie” was adapted into a Broadway musical called, “She Loves Me,” starring Barbara Cook and Daniel Massey.
• The story was adapted for the last time in 1998 as “You’ve Got Mail” set in contemporary New York City and starring Meg Ryan and Tom Hanks.

And while I’ve never seen the two play versions, I feel like this story has the unique advantage of every film version working and being enjoyable.

Today, however, I’m focusing on the musical version, “In the Good Old Summertime.” Despite the title, much of this film is set in the winter, specifically at Christmas.

Van Johnson plays Andrew Larkin, the head sales clerk at Oberkugen’s music store. He also has a letter correspondence with an unknown woman, where they discuss intellectual ideas. Judy Garland plays Veronica Fisher, a young woman looking for a job who lands a job at Oberkugen’s after selling a harp to a customer. Veronica also has a secret correspondence with a man. Andrew and Veronica take an instant disliking to each other, not knowing that they are writing each other letters – and falling in love with each other on paper.

“In the Good Old Summertime” is the rare musical remake that is fun and charming. Judy Garland and Van Johnson complement each other well in this film and make a great leading couple.

The leads were originally supposed to be Frank Sinatra and June Allyson, and I am thankful they were both unavailable, as I don’t think this would have been as good of a film. I love June Allyson, but the characters MGM was casting Frank Sinatra in during this time (On the Town, Anchors Aweigh, The Kissing Bandit) all had him playing dopey and bashful characters. I think that would have been the case here, and it just wouldn’t have worked.

The supporting cast of “In the Good Old Summertime” is equally great. We have comedic master Buster Keaton as Oberkugen’s nephew. Keaton was originally hired as the comedic advisor for comically breaking a violin. Instead, he was hired for the role, performing the violin breaking himself and also choreographing other comedic scenes, like when Van Johnson and Judy Garland first meet. Johnson knocks her over, destroys her hat, and rips of her skirt as he rides away on a bicycle. If you think of Keaton’s silent film work, you can see his hand in this scene.

Mr. Oberkugen is played by the wonderful S.Z. “Cuddles” Sakall and his finance Spring Byington is his girl. They both are wonderful, as always. We also have MGM contract worker, reliable Clinton Sundberg.

Also watch for Marcia Van Dyke in her first credited film role. While this is one of her few roles, she is good in the part. Unlike many violinists in films, Van Dyke really is doing her own performing here. She was a professional violinist in the San Francisco Philharmonic. 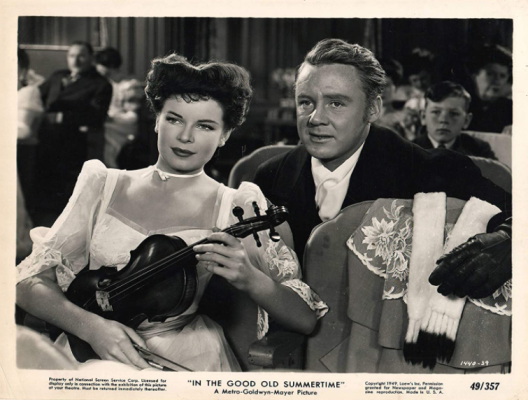 Marcia Van Dyke and Van Johnson in “In the Good Old Summertime.”

Also watch for the end – with little Liza Minelli in her first screen role as Judy Garland’s child.

The film is filled with songs popular in the era that was set. I’ve always found the “I Don’t Care” number humorous (probably unintentionally), but I also have tried to make that tune my mantra – don’t we all?

A highlight is Garland’s performance of “Merry Christmas.” The whole movie has a warm and cozy vibe, and I love to see the various Christmas decorations in the film.

My only complaint is that “In the Good Old Summertime” was Van Johnson and Judy Garland’s only teaming. They made a great pair.