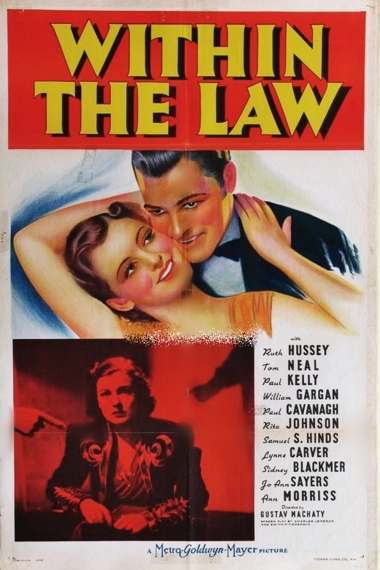 Plot:
Mary Turner (Hussey) is falsely accused of grand larceny when stolen goods are planted on her. She’s sent to jail for a three year stretch, and while she’s there, she studies law books. When she gets out, she learns how to break the law … but within the law.

Other trivia:
• This is one of many film versions based on the 1912 play, “Within the Law.” The other films include:
– Within the Law (1916) — a short film made in Australia
– Within the Law” (1917) — made by Vitagraph in the U.S. starring Alice Joyce, Harry T. Morey and Walter McGrail
– Within the Law (1923) — Produced by Joseph Schenck in the U.S. and starring Norma Talmadge, Lew Cody and Jack Mulhall.
– Paid (1930) — produced by Metro-Goldwyn-Mayer and starring Joan Crawford, Robert Armstrong, Marie Prevost and Douglass Montgomery.
– Intaquam (1969) — filmed in India by Shaktiman Enterprises and starring Sadhana and Ashok Kumar.
– Pagabattina Paduchu (1971) — filmed in India
• Lee Bowman was originally going to be cast as Richard Gilder, which went to Tom Neal.

My review: Searching for the “1939 feature”:
I’m going to start sounding like a broken record but … bring back the 65 minute movie (or really anything under 90 minutes, for that matter).

This week’s 1939 film WITHIN THE LAW runs at 65 minutes. And in that brief amount of time, the story is effectively packs a punch with a gripping story of a woman falsely accused of a crime and how it alters her life when she’s released from jail.

Now, this isn’t a new story. It was first presented on the stage in 1912 and then told numerous times on film since then. Metro-Goldwyn-Mayer produced this same story starring Joan Crawford just nine years before retelling it as a B-budget quickie.

Even in 65 minutes, actress Ruth Hussey is excellent—I think she is really great and doesn’t often get recognized for her ability.

Another highlight is Rita Johnson, who dishes the snappiest lines while looking fabulous. Johnson really has the plum role of the film.

The cast is rounded out by other actors who generally land in B-films like Paul Kelly, Paul Cavanagh, Tom Neal, Samuel S. Hinds and Sidney Blackmer.