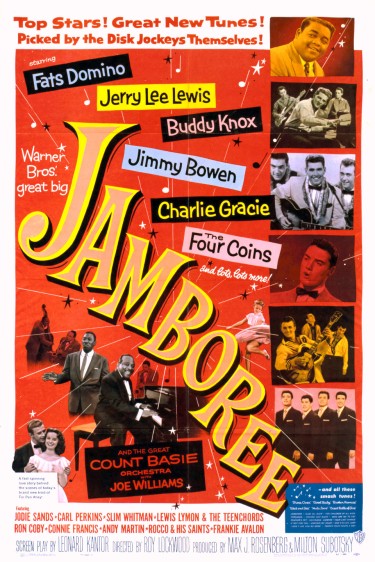 Plot:
Teen singers Honey Wynn (Holloway) and Pete Porter (Carr) aren’t doing well on their own. Their agents (Medford, Pastene) —who were previously married — hatch the idea that they should be a singing duo.

Highlights:
• Appearances of performers and deejays 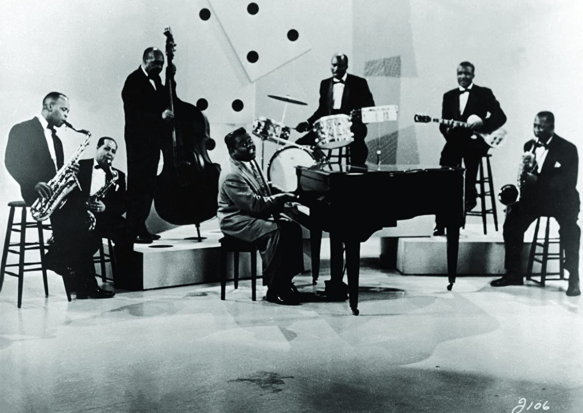 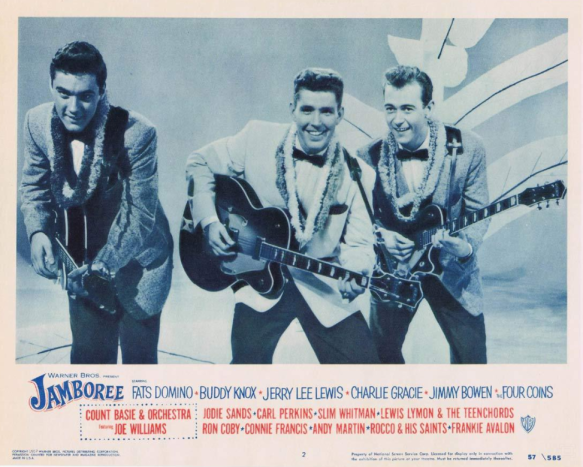 My review:
If you are looking for a musical with a solid plot, JAMBOREE (1957) isn’t your film. But if you are interested in a time capsule of 1950s performers and radio deejays, this movie may interest you.

JAMBOREE is one of several films around this time that mainly focuses on rock and roll performances. This includes ROCK, ROCK, ROCK; ROCK AROUND THE CLOCK and DON’T KNOCK ROCK.

The minor plot in JAMBOREE is that two teens Honey Wynn (Holloway) and Pete Porter (Carr) can’t make it as solo singers, so their agents (Medford, Pastene) — who happened to be divorced from each other — decide to make the two a singing duo. Honey and Pete become successful together and also fall in love. But their greedy agents decide to use the new fame to launch solo careers, turning Honey and Pete against each other.

Throughout this plot are rock performances. They are worked in as either other singers recording in studios, performing on shows that the teens are singing on, and largely in a major telethon that the teens take part of.

I wasn’t familiar with some of these names prior, and really enjoyed Slim Whitman, Joe Williams and Buddy Knox as new-to-me performers.

As for our teen stars, Paul Carr appears to be doing his own singing, but Freda Holloway is dubbed by Connie Frances, who is given vocal billing in the credits. Frances also dubbed Tuesday Weld in ROCK, ROCK, ROCK. So Frances later acted in films, I’m curious why she didn’t appear in these films. Incidentally, this was Freda Holloway’s only feature film.

Another major highlight is the radio deejays from around the country who participate in the telethon—from Dick Clark to Jacko Henderson who wears a far out, space-like outfit.

Overall, don’t worry about the plot of this film. I forgot the plot half the time, because I got lost in the music. If you are a 1950s rock n’ roll fan, this is a must see.