Plot:
Ethel (Revnell) and Gracie (West) try to enlist in the Women’s Auxiliary Air Force (WAAF) so they can go to a dance. In the process, they capture German spies and join the Balloon Command. 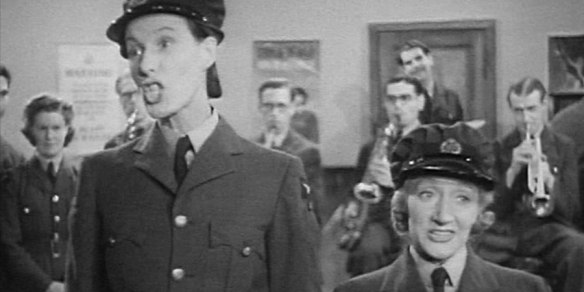 Highlights:
• The real footage of the WAAF Balloon Command.

My review:
“The Balloon Goes Up” is a brisk 53-minute musical with musical numbers that were better than the plot.

The plot follows two women, Ethel and Gracie, who decide to join the WAAFs so that they can go to a dance and meet men. Not exactly cut out for the work, they still manage to catch German spies.

This was my first introduction to comedic team Ethel Revnell and Gracie West, who were a comedic team. They were pretty funny and I enjoyed their musical numbers together.
To me, the most interesting aspect of the film was the real-life footage of WAAFs in the Balloon Command. It also had interesting credits, showing the sheet music for each song that will be performed.