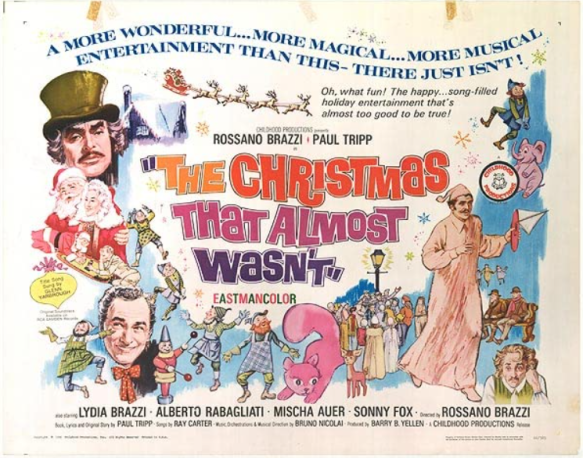 Plot:
When child hating Phineas T. Prune (Brazzi) buys the North Pole he threatens to evict Santa Claus (Rabagliati) unless he stops giving toys to children. Refusing to stop bringing joy to children, Santa seeks the help of lawyer Sam Whipple (Tripp) to help him figure out what to do. Sam helps Santa get a job in a department store meeting children. 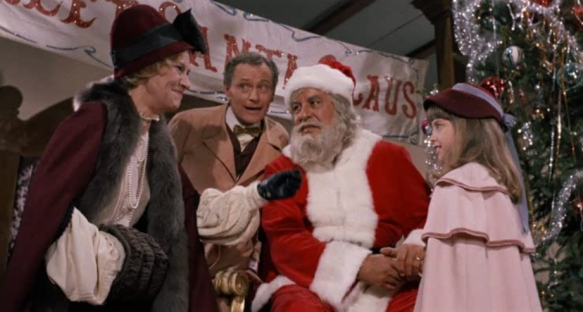 My review:
Italian actor Rossano Brazzi usually played suave, debonair romantic leading men throughout the 1950s and 1960s in films like SOUTH PACIFIC, SUMMERTIME or LIGHT IN THE PIAZZA.

You see Brazzi like you’ve never seen him in THE CHRISTMAS THAT ALMOST WASN’T.

In his directorial debut, Brazzi plays completely against his usual type. In THE CHRISTMAS THAT ALMOST WASN’T, Brazzi plays a child and Christmas-hating miser named Phineas T. Prune. His look is cartoon-like with wild eyebrows, long hair coming out of a top hat and he lives in a dusty, cobwebbed home. Prune hates Christmas so much that he buys the North Pole so he can evict Santa Claus so that Santa can’t bring joy to children with toys on Christmas Eve.

A downtrodden Santa (Alberto Rabagliati) visits lawyer Sam Whipple (Paul Tripp) and asks for help. Years ago, Sam wrote Santa a thank you note after Christmas saying “if he could ever help him, let him know.” Sam tries to figure out a way to help Santa, and determines Santa needs a job to pay the rent.

THE CHRISTMAS THAT ALMOST WASN’T comes from a story by Paul Tripp — who stars in the film — and the screenplay was adapted by Tripp and Brazzi. The songs in the film were written by Tripp with Ray Carter.

This is sort of a strange movie, and also not the best, but somehow I didn’t hate it. The heart of the story is there and Brazzi is really excellent. I actually felt what could have elevated it was better actors and better songs.

Tripp made me think of a poor man’s Danny Kaye, and many of his songs were overly rhyme-y. For example, “I’m glad your sad that I’m bad” or “moon, prune, spoon, June, the name of the song is prune.”

Would this film have been elevated if Kaye co-starred with some Sylvia Fine tunes? I’m not sure.

While the songs aren’t very good (though the intro song “The Christmas That Almost Wasn’t” is quite the swingin’ sixties toe-tapper), I did enjoy hearing Brazzi actually sing, especially since he was dubbed in SOUTH PACIFIC.

Also in the supporting cast was Brazzi’s wife, Lydia Brazzi who only started appearing in films 1966, and veteran Hollywood actor, Mischa Auer. Auer plays the head elf, Jonathan, with his signature depressed comedic looks. This was one of Auer’s last films, as he died in 1967.

Italian actor Alberto Rabagliati plays a thoroughly depressed Santa in his last films. At one point Santa freaks out, because he has to deal with children when they are awake

THE CHRISTMAS THAT ALMOST WASN’T is an Italian-American film, and while it has an Italian feel and you would think most of the actors were dubbed by in English, most of the actors were veterans to Hollywood films or American. Brazzi and Auer were both Hollywood actors, and Tripp was American. Tripp narrated the 1975 cartoon, TUBBY THE TUBA. Sonny Fox, who plays Santa’s employer, was an American game show host. As far as the lead actors, I think Rabagliati was the only adult actor who may have been dubbed.

The beginning of the movie had me shaking my head but I was charmed at the end, and I don’t even know why. I really think it was seeing Brazzi in a completely different character than you’ve ever seen him.

1 thought on “Musical Monday: The Christmas That Almost Wasn’t (1966)”