Plot:
Broadway producers — Al Marsh (Skelton), Tony Naylor (Keel) and Jerry Ralby (Gower Champion) — are trying to raise capital for their new show. Just as they are about to give up, Marsh learns that he inherits a fashion house in France after his Aunt Roberta passes away. The three travel to France, to sell Marsh’s portion of the fashion house to earn capital for their show. The plan backfires when they learn the business is financially not doing well. The three stay on to help Stephanie (Grayson) and Clarisse (Marge Champion) get the business back up on its feet.

Trivia:
• Version of the film “Roberta” (1935), which was based on the novel “Gowns by Roberta” by Alice Duer Miller and then made into a 1933 Broadway play.
• MGM purchased the film rights to “Roberta” from RKO. In 1946, the Hollywood Reporter initially announced Lucille Ball to be in the comedic countess role, that Ginger Rogers played in the RKO film. In 1948, the Los Angeles Times announced Judy Garland, Gene Kelly, Frank Sinatra and Betty Garrett as potential stars of a “Roberta” remake.
• Zsa Zsa Gabor’s first film.
• Second (of three) films co-starring Howard Keel and Kathryn Grayson.
• Director Mervyn LeRoy said Kathryn Grayson, Marge Champion, Ann Miller and Zsa Zsa Gabor were such close friends on set that they were often all laughing together in a corner, according to TCM host Jacqueline Stewart.
• Kathyrn Grayson’s last film under the her original MGM contract. 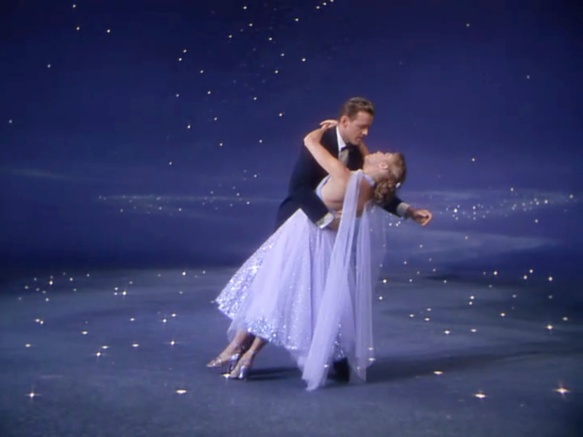 Gower and Marge Champion dancing to “Smoke Gets in Your Eyes”

Highlights:
• Marge and Gower Champion dancing together, especially the “Smoke Gets in Your Eyes” number.
• Gowns by Adrian, who is also worked into the script. On fashion designing, Howard Keel’s character says “If it’s good enough for Adrian, the great American designer, its good enough for us.”
• Red Skelton singing and then saying, “Well you knew I wasn’t Howard Keel when I came out here!” 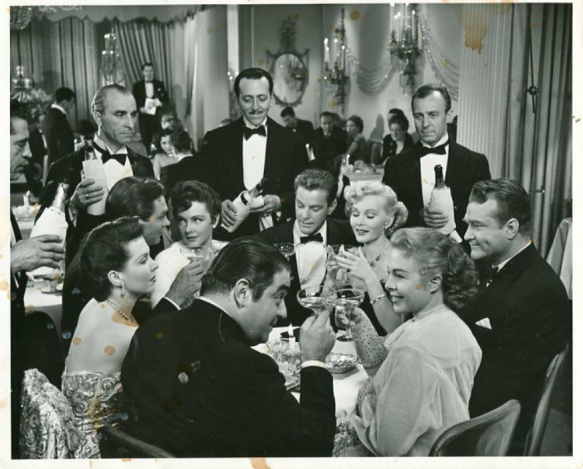 With its slightly different plot and characterizations, the story stands on its own two feet and isn’t just a rehashing with a new set of actors repeating the same old lines. “Roberta” (1935) was an RKO musical while “Lovely to Look At” (1952) is an MGM musical — both are glittering spectacles but in entirely different ways.

Many of the same songs are repeated, but performed in a different manner. For example, “I’ll Be Hard to Handle” was a duet dance with Fred Astaire and Ginger Rogers in ROBERTA and here, it was a nightclub number performed by Ann Miller.

LOVELY TO LOOK AT is star-studded with Kathryn Grayson, Howard Keel, Ann Miller, Red Skelton, Marge Champion, Gower Champion and Zsa Zsa Gabor in her first film! There are so many top stars here, it’s hard to know what order to place them in.

Kathryn Grayson and Howard Keel proved they had great chemistry the year prior with SHOW BOAT. But for me, the best romantic pairing are real-life husband and wife dancers, Marge and Gower Champion. Frankly, they steal the show and are the main reason to watch this film. Their dance numbers are stunning, particularly the “Smoke Gets in Your Eyes” dream sequence. If you aren’t into fashion or opera singing, watch for them.

LOVELY TO LOOK AT is also quite funny. There are some lines said by the characters that tie back to the actual cast and crew that made me laugh. For example, while talking about fashion designing, Howard Keel’s character mentions “Adrian, the great American designer.” Adrian created the costumes for this film. During a comedy skit, Red Skelton starts to sing and then says, “Well you knew I wasn’t Howard Keel!”

While sometimes Skelton’s style of comedy can be a bit much for me, I thought he was very funny here, including in his comedy skit. Gower Champion plays the piano behind him, and I felt his laughter looked genuine.

The whole film is wrapped up with a 10-minute, Technicolor, Adrian-designed fashion show. What more could you ask for? In my opinion, there is nothing like a film fashion show.

LOVELY TO LOOK AT is perhaps not one of MGM’s best remembered musicals, but it’s such a delight, and a feast for the eyes.