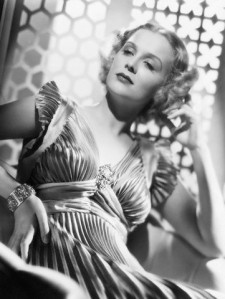 Many people know Gloria Stuart as the adorable old lady who plays Rose as an old woman in the 1997 waste of time “Titanic.”

However, when I think of Gloria Stuart, I think of her in my favorite Shirley Temple movie, “Rebecca of Sunnybrook Farm” (1938). Stuart played the country girl that befriends Shirley Temple and helps get her to a radio gig at the end of the movie. She also plays the love interest to attractive Randolph Scott.

Gloria Stuart was one of the many beautiful Warner Brothers glamour girls of the 1930s, however she did not have as a big of a career as other actresses such as Joan Blondell, Gail Patrick or Ginger Rogers.

She did manage to appear and be serenaded by  Dick Powell in “Gold Diggers of 1935” (1935), one of the few “Gold Diggers” movies that didn’t star Joan Blondell.

I have to be honest, “Rebecca of Sunnybrook Farms,” “Poor Little Rich Girl“(1936) and “Gold Diggers of 1935” are the only Stuart films I have seen. Most of her films were low budget 1930s and 1940s films. She had 69 film credits to her name, which sounds like a lot by todays standards, but wasn’t much for a 1930s and 1940s actress. Actresses like Kay Francis and Bette Davis made up to 100 films, filming two to four in just one year.

But though Stuart’s film career might not be as impressive as some, she accomplished one thing that many stars do not: She was married to her filmographer husband Arthur Sheekman from 1934 until his death in 1978, a long marriage by Hollywood standards that few are able to boast.

Stuart was also nominated for an Oscar for Best Supporting Role in “Titanic.” I think it is really a shame that she didn’t win, seeing that the film won every other Oscar, tying for most winnings with “Ben-Hur” (which in my opinion, how can you compare a stupid romance movie with the religious and moving Ben-Hur. I like the 1950s version of Titanic MUCH better).

Anyhow, let us not remember Miss Stuart for tossing a blue sapphire necklace into the ocean at the end of a movie, but for her lovely 1930s glamour as Dick Powell serenades her with “The Words are in My Heart.”