In the shadows of Elizabeth Taylor’s death, Farley Granger died on March 27, at age 85.

Sometimes I think that Farley Granger was forgotten. He wasn’t as dynamic as other 1950s actors like Marlon Brando, and he was pretty awkward compared to suave Cary Grant, but Mr. Granger was one of my passing crushes when I first dove into classic film at the age of 14.

I’m not sure what attracted me to the tall, lanky and usually angry Farley Granger, but he was one of the many random actors (along with John Kerr, Peter McEnery and James Darren) that I had fleeting crushes on. 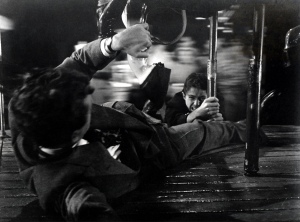 My favorite scene in “Strangers in a Train.” Farely is in the background holding on for dear life.

Granger was also in two of Hitchcock’s most well known films: the odd film adpatation of the play “Rope” and the thrilling “Strangers On A Train.”

I next saw Granger in “Hans Christian Andersen” (1952) with Danny Kaye. It’s such a quirky, silly movie but I love it. The etherial song “Wonderful Copenhagen” and the adorable “No Two People” had me enchanted.  Granger plays an angry fellow who is mean to Danny Kaye and locks him in a closet!  Granger then goes on to play an equally hot tempered man in “Small Town Girl” with Jane Powell.  I’m not sure why Granger was always cast as a hot head, but he could play a grouch very well.

Farley Granger and Ann Blyth in “Our Very Own”

A few of my other favorite films of his are “Our Very Own” where Ann Blyth finds out she was adopted, and, one of his first films, the war film “Purple Heart.”

Granger’s film career petered off in the mid-1950s and he acted mainly on television and then made a few films in the 1970s.  It’s sad that he entered and exited the film scene so quickly.  He only had substantial roles in half of them, while several of his others were small supporting characters.

Regardless of his screen time, I am sad that yet another star has risen. Farewell Farley Granger, you will be missed.