It’s no secret that the Hollywood Comet loves musicals.
In 2010, I revealed I had seen 400 movie musicals over the course of eight years. Now that number is over 500.
To celebrate and share this musical love, I’m starting a weekly feature about musicals.

Plot:
Three cousins find they are heirs to a southern plantation in Georgia. The cousins couldn’t be more different: singer Blossom Hart (Blaine), defense worker Chaquita Hart (Miranda) and con man Harry Hart (Silvers). The mansion isn’t quite what they expected and they turn it into a home for the wives of soldiers who are stationed at a nearby Army base. To help raise money for the home, they put on a show and Blossom meets and falls in love with soldiers Rocky Fulton (O’Shea).

Trivia:
-Ethel Merman starred in the original Broadway production that opened on Jan. 7, 1943 and ran for 422 performances.
-Judy Holliday can be spotted in a brief role six minutes into the film. This is her third film.

Judy Holliday in a brief role in “Something for the Boys” (Comet Over Hollywood/ Screen Cap by Jessica P.)

Notable Songs:
-Carmen Miranda sings “Batuca Nega” and “Samba-Boogie.” Any Miranda performance in a film is notable for her energy and colorful outfits.
-Phil Silvers performs the song “Southland.” Though he’s from New York, it seems to be a running tradition in Silvers’s films to sing songs about the South. His songs are similar to songs Al Jolson would sing.
-We get to hear songs from popular 1940s singer Perry Como, who performs “In the Middle of Nowhere” and “I Wish We Didn’t Have to Say Goodnight.”

Perry Como singing “I Wish I Didn’t Have to Say Goodnight” to Cara Williams. (Comet Over Hollywood/ Screen cap by Jessica P.)

Highlights:
-A running joke in the movie is that Carmen Miranda has carborundum in her tooth filling from working as a machinist. Because of this, she always hears the radio, whether it is on or off. It’s pretty silly but a unique joke. At one point in the film, they use her to send Morse Code.

-Judy Holliday says one line six minutes into the movie. Her line explains the problem Miranda may be having with carborundum in her teeth.
-Seeing Vivian Blaine star in the film. Blaine is an energetic, beautiful and talented performer who I enjoying seeing in any film. It’s a shame she is not as well remembered as other 20th Century Fox actresses.
-Jimmie Dodd of Mickey Mouse Club fame can be spotted 51 minutes into the film as a “gambling soldier.” 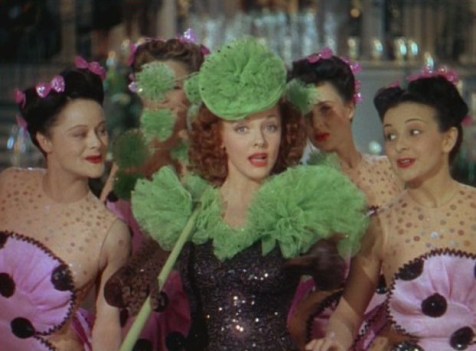 My review:
“Something for the Boys” is a light but fun musical filmed during World War II. It is in color, has catchy songs and gorgeous costumes, but it somehow falls short of other Fox musicals that starred Betty Grable or Rita Hayworth.
There are some very silly jokes such as Carmen Miranda’s short-wave-radio-tooth, but it’s entertaining nonetheless. My only complaint is that I find Phil Silvers annoying and Michael O’Shea to be a weak leading man.
It’s not a well-known film with a cast of stars who are fairly forgotten today, with the exception of Carmen Miranda and Phil Silvers.
However, it’s a glittering and colorful musical comedy that will brighten a lazy afternoon. 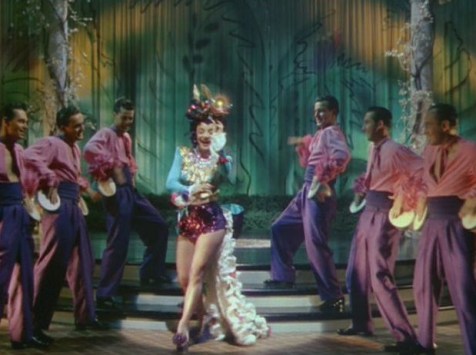